This news broke this morning on Twitter, following yesterday’s leak of a draft of the new encyclical: 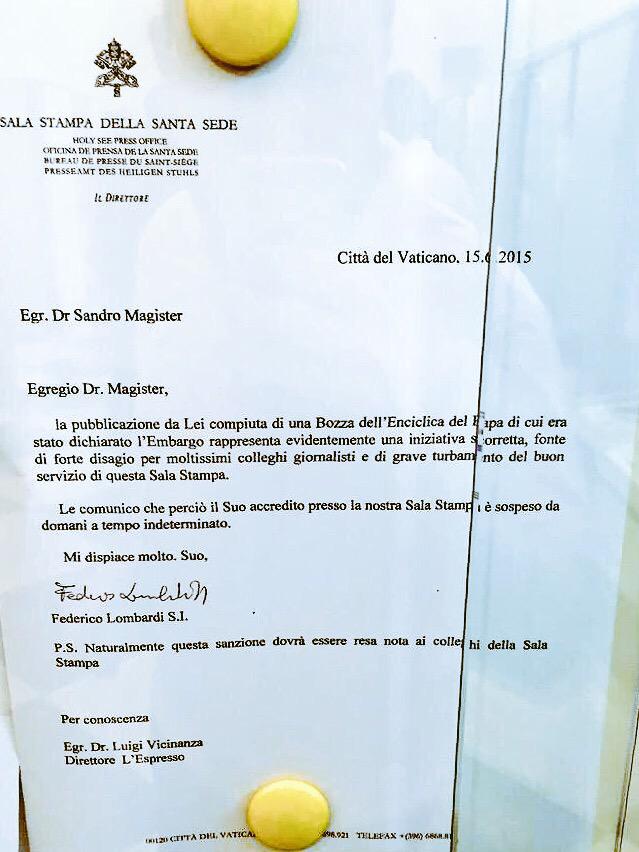 In a press release, Federico Lombardi reported that he was withdrawing the press accreditation of Sandro Magister to access the Press Room of the Vatican for “publishing a draft encyclical the Pope.” Lombardi has argued that the draft was under embargo and publication damages the image of the journalistic profession. Sandro Magister received the text as a leak and decided to go public.

Magister is a prominent and widely-read observer of the Vatican scene. From hisWikipedia entry:

Sandro Magister is an Italian journalist who writes for the magazine “L’espresso“. He specializes in religious news, in particular on the Catholic Church and the Vatican. He has written two books and has taught courses about political history of the Italian episcopate : “Italian Church: Vatican “Politics and Italy 1943-1978” and “Extraparliamentary Church: The Triumph of the Pulpit”. He also manages the website Chiesa on the topic of modern ecclesiastical affairs.

This action by the Holy See seems to me both necessary and appropriate.

This is hardly the first time a major Vatican document has leaked out prior to publication, and the dynamics are virtually always the same — Church officials decry the leak and demand that everyone cool their jets until the official version is released.
Exacerbating things this time around, however, is that the scoop appeared in the widely read Italian news magazine “l’Espresso” under the byline of veteran Vatican commentator Sandro Magister, whom many see as a conservative voice hostile to Pope Francis.
(Magister told The Associated Press that his editor, not he, obtained the document and decided to publish it. Magister said he just wrote the brief introduction.) Picking up on Magister’s report thus seemed ethically problematic in two senses: First, does it mean violating the trust of a source, in this case the Vatican? Second, does it make anyone who does so complicit in someone else’s political agenda? Magister said he came by his copy of the encyclical through an anonymous source in the Roman Curia. Only he can speak to whether that source imposed any conditions on use of the information, but in any event, it’s no violation of an official embargo if your material doesn’t come through official channels. (That’s clearly not how the Vatican sees things, however. On Tuesday, the director of the Holy See Press Office, the Rev. Federico Lombardi, posted a copy of a brief letter to Magister in the hall calling publication of the encyclical a “source of strong discomfort for many journalistic colleagues and grave disturbance to the good service of this press office,” and informing him that his accreditation has been suspended.)

Prayer for this evening
Top 10
1
Bret Thoman, OFS
All your sins will be forgiven if you go to a Franciscan church o...
2
Francisco Veneto
The military chaplain who pretended to be a criminal to rescue a ...
3
Theresa Civantos Barber
The one thing we all should do before this summer ends
4
Violeta Tejera
Carlo Acutis’ first stained glass window in jeans and sneak...
5
Cerith Gardiner
Gold-winning Filipina Olympian shares her Miraculous Medal for th...
6
Ary Waldir Ramos Diaz
1st Feast of Our Lady of Silence is August 1
7
Cerith Gardiner
Simone Biles leaves the Olympics with an important lesson for her...
See More