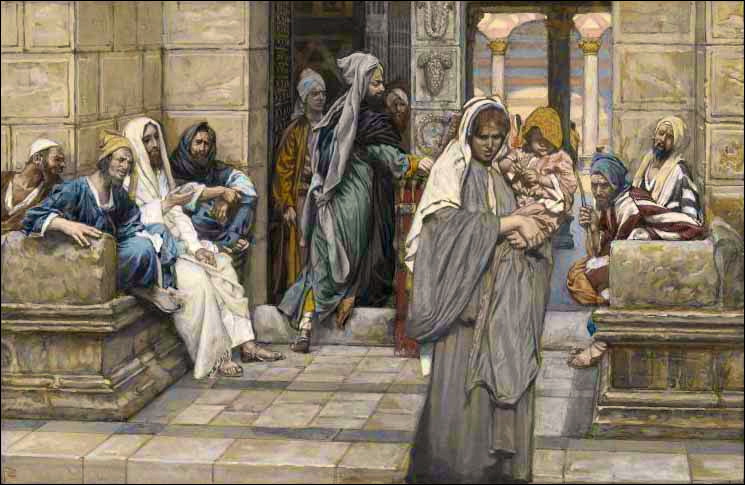 [I’m not preaching this weekend, but here’s my homily from the same Sunday in 2009. — DGK]

We hear this gospel story, about the widow’s mite, and tend to think of it as a lesson in giving, and great sacrifice. And that is true.  It’s a lesson we need to hear, especially in these hard times.

But looking over the readings for today, from the book of Kings and Mark’s gospel, I was struck by something else. There is another theme that casts a long shadow over these two scripture readings this Sunday.

They are both about giving, yes.

But they are also both about something unexpected.

They are about loss, and death.

Last week, when we heard the Beatitudes, we heard once again that “blessed are they who mourn.” This week, we are challenged to look beyond the mourning.

The two women in these readings were widows. Once, they loved someone, and depended on him. But death changed everything. Which means they were both struggling just to stay alive. They may even have been beggars. Thousands of years ago, if a woman became a widow, and had no family to support her, and no significant amount of money socked away somewhere, her life was effectively over. She might literally be living day-to-day, hand-to-mouth.

A widow in Jesus’ day would have a hard enough time just taking care of herself, and her children, let alone anyone else.

And, they were blessed.

It calls to mind another widow who was blessed: Mary. Maybe Jesus saw that widow at the treasury and thought of his own mother – what she sacrificed, what she had, what she lost. She may very well have had to struggle to make ends meet. Jesus saw that. He knew that. He knew the value of those two small coins. He understood where the widow at the treasury was coming from. He’d seen it for himself.

And he understood what that widow at the temple was doing.

She didn’t hold back. She let go.

She didn’t take. She gave.

That is a lesson we all need to hear. We may suffer terrible losses that rob us of those we love. We may grieve, and we may mourn, and we may ask ourselves “Why?”

But the way through loss…is love. Opening our hearts. Giving ourselves. Holding nothing back.

The other day, I got an e-mail about a little girl named Elena Desserich.

When she was five years old, the only thing Elena wanted to be when she grew up was a mom. She also loved art class, and drawing. She loved dresses with laces and ruffles. Her favorite color was pink. Whenever she played school, she always wanted to be the teacher. She liked babies and headbands and her pet Chihuahua Sally.

But before she turned six, Elena was diagnosed with a rare brain cancer. She was given only a few months to live. The disease at first took away her ability to speak. Then her eyesight. Then her ability to move. But before the disease could take away everything, Elena did something unusual – and remarkable — with the time she had.

She began to write.

Nothing elaborate. Just simple notes. “I love you Mom and Dad.” Or to her sister, “I love you Mom and Dad and Grace.” She’d color in lopsided hearts and misspelled “YOU” as “YUO.” The writing was crooked and she didn’t always color in the lines. But the words were the same. “I love you.” She wrote dozens of them. Then, after writing the notes, Elena hid them around the house. Months after Elena died, her parents were still finding them in obscure places, tucked away, hidden – love letters from Elena. “I love you, Mom and Dad.” She wanted those words to be found after she was gone.

Her parents eventually collected all the notes and published them, along with Elena’s story, in a book that is raising money for cancer research. It’s called, fittingly, “Notes Left Behind.”

What can a six year old child give? Elena gave her heart, in the only way she could. Like the widow in the gospel, she gave as much as she was able.

What matters, really, is simply to give. Even in the midst of a shattering loss.

This month, we remember our own losses. Throughout November, at all the masses, we hear the names of those who have died and been buried from this church. As a community of faith, we are like the widow in the gospel: we have all been touched by death. And so we pray for those we’ve lost.

But even beyond our own grief, beyond personal loss, we all carry with us some sadness, some hurt. There are a thousand smaller deaths that leave their mark on us. Injustice. Abuse. Betrayal. Infidelity. Anxieties and fears. We may feel the world is unfair and unjust. We may carry scars that others can’t see.

But the gospel today carries a beautiful message: the answer isn’t in a closed fist…but an open hand. A hand that gives. A hand that holds nothing back.

Blessed Mother Teresa famously said, “We can only do small things with great love.”

It may be something as small as coin, or a note, or a whispered prayer. But we need to offer it with love. A love that holds nothing back. Remember the widow at the treasury. Remember a little girl named Elena

And so we ask ourselves: how can we live that love? How can we share that faith?

What can we give?