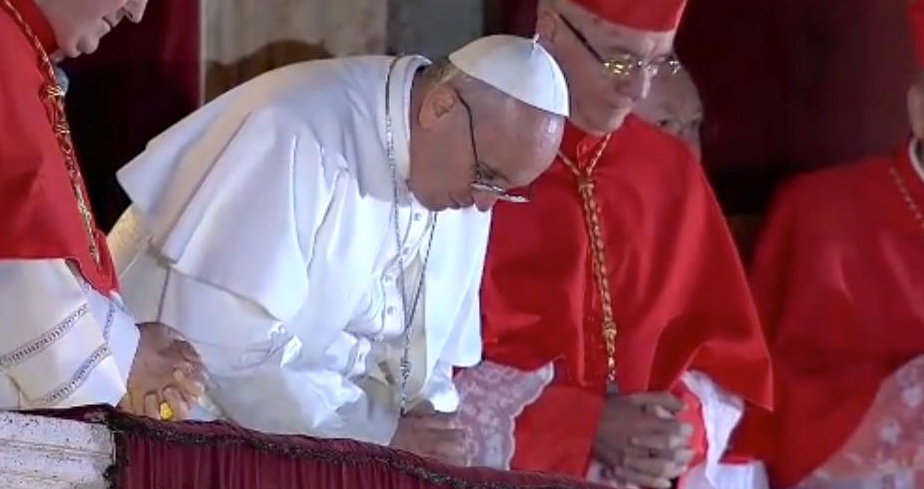 Back in 1978, when Karol Wojtyla became Pope John Paul II, a French journalist sent a message back to his office in Paris.

Thirty-five years later, I can’t help but think that history is repeating itself.

At this moment, the words from Isaiah have even more resonance.

“Thus says the Lord: See, I am doing something new!”

Francis, the rich man who embraced a life of poverty.

Francis, who never thought himself worthy of being a priest and was, instead, a deacon.

Francis, who answered God’s call to “rebuild my church.”

Again and again, we’ve been reminded: it is a church that includes all of us.  This Francis began his pontificate with two simple words every Italian knows: “Buona serra.”  Good evening. He led us in prayers that all of us learned as children – the Our Father, the Hail Mary, the Glory Be.  He bowed before the world and asked the faithful for God’s blessing.

His humility has been striking. When he visited the basilica of St. Mary Major the day after his election, he told them not to close the church.  He didn’t want special treatment, he said, because “I’m also a pilgrim.”

As the people of Buenos Aires began to make plans to visit Rome for his installation, he had the nuncio issue a letter with a message: don’t spend money on a trip to Rome.  “The Holy Father would prefer that you keep spiritually close,” the letter explained, “but make some gesture of charity toward the poor.”  In his first press conference Saturday, the pontiff even spoke of a “poor church, a church for the poor.”

Charity, a love for the poor, is already a hallmark of this young papacy.  But so is something else – something our hearts are hungry for, especially now, during Lent.

In today’s gospel, the last one before Palm Sunday and the start of Holy Week, we encounter again the story of the woman caught in adultery. We hear her accusers, we relive once again the moment when she was facing a sentence of death – and we hear Christ say, instead, “Go…do not sin anymore.”

But embodying the words from Isaiah, Jesus was also doing “something new”— offering not condemnation, but mercy, the eternal hope of beginning anew.

It is a path Pope Francis is following, as well.  It’s a beautiful coincidence that we encounter this gospel now, at the very beginning of his papacy.

Because he brings to the chair of St. Peter, first and foremost, a message of mercy.

Years ago, on becoming a bishop, he chose as his motto a Latin phrase that, roughly translated, means, “Lowly but chosen.”

It was inspired by a passage by Venerable Bede, a doctor of the church from the 8thcentury, who wrote of the way in which Matthew, the tax collector, was called by Christ. It describes how our new pope saw himself:

“Having been looked upon with mercy and chosen.”

Just this year, as Cardinal Jorge Bergoglio, the man who would be pope, wrote of mercy in his Lenten message to the people of Buenos Aires. “Lent comes to us as a cry of truth and sure hope which answers yes,” he wrote. ”Yes, it is possible that everything be made new and different because God continues to be ‘rich in kindness and mercy, always willing to forgive,’ and He encourages us to begin again and again.”

So it is in our lives – and, most emphatically, in our Church.  Pope Francis is a bold reminder to a cynical and disbelieving world, a challenge to a bruised and sometimes despairing Church.  He assures us that we are “beginning again and again.”

And that, unquestionably, is part of the story of Lent.  Last week, you’ll remember, we heard the parable of the prodigal son—the son who was lost yet found, dead in sin but restored to life. This week, it’s the woman caught in adultery—handed a death sentence because of her sin, but also given a chance at new life.

And it happens for one reason: God’s mercy.

When the Holy Father visited St. Mary Major the morning after his election, he spoke with priests who were working as confessors.  “Be merciful to souls who come to you, they need you,” he told them.  “Mercy, mercy, mercy.”

They are welcome words for the world in these final days of Lent – an encouragement to all of us who walk and stumble and fall, all of us who feel we have squandered our lives and want to return home, all of us trapped by sin and awaiting judgment and begging, praying, for one more chance.

If we ever doubted it, we need to remember: God’s mercy never fails.  He does not throw stones.  He does not turn away from the child He loves, even one who abandons Him.  He offers, instead, forgiveness.  Grace.  Reconciliation.  A chance to come back.  There is no better time than now to celebrate the sacrament of reconciliation, to restore what was broken, to heal what was hurt.

We can “begin again and again.”

Pope Francis will need our prayers as he embarks on the great work before him—work of charity, and mercy, and “sure hope.”  Let us pray that God who has begun this great work in him will bring it to completion, the words of the prophet echoing in our hearts.