Every now and then, you’ll find a film critic who bemoans the state of Hollywood movies by pointing out that there are too many sequels.

Last year, a writer noted that in 2010 there were 86 sequels in various stages of development.  Just this year, we have “Scream 4″ about to open,  along with “Underworld 4,” “Mission Impossible 4,” “Cars 2,” “The Hangover 2,” “Transformers 3,” and the final part of the Harry Potter Series.

Ever since the first story was ever told, human beings have wanted to know: “What happened next?” 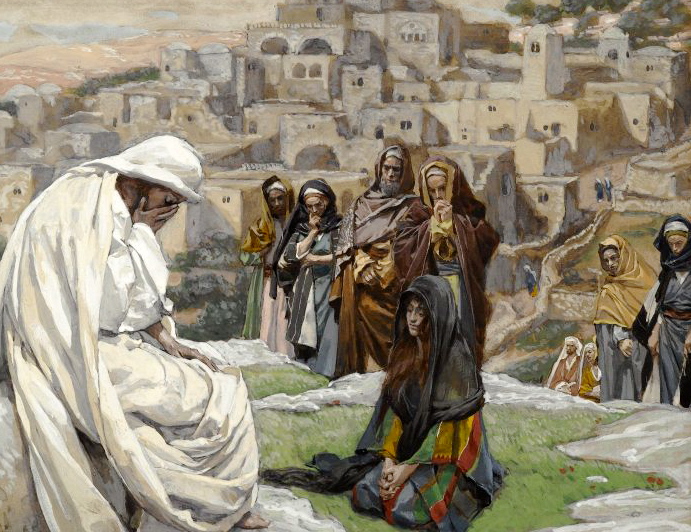 I find myself feeling that way about this Sunday’s gospel – surely one of the most dramatic and moving episodes in all of the New Testament.  And it always makes me wonder:

What happened to Lazarus after he was brought back from the dead?  How much longer did he live?  What did people say to him?  What did he say to them?  Was he haunted by his memories of his former life?  Did he remember what happened when he was dead?  How did all of that change him?

More importantly: what would any of us do if given a second chance at life?

Well, there is no Lazarus 2.

But I think if you really want to know what happened next, the best answer is closer than we may think.

Because Lazarus … is all of us.

That, in fact, is the point of the gospels we have been hearing the last three Sundays – three extraordinary events from the gospel of John.  Three people who had an encounter with Christ.  Three people whose lives were changed forever because of it.

There was the skeptical and disbelieving woman at the well – who was so stunned at how Jesus knew her, she had to go out and tell others.

There was the blind beggar who gained more than just his sight – he came to see the truth of who Jesus really was.

And there was Lazarus – literally, the walking dead, restored to life because he answered the call of his friend Jesus.

These people are more than figures on a page.  They were flesh and blood.

And they are you and me.  Look deeper, and you’ll recognize it.

We are thirsting, like the woman at the well.  Christ quenches that thirst.

We are blind beggars.  Christ gives us light.

And – whether we realize it or not – we are Lazarus.  We are trapped in a tomb –  hidden in the dark and the decay and the stench, wrapped up on our own brokenness, our own sinfulness.  We could be there forever.

But in the midst of that, Jesus weeps.  He weeps for us – because he loves us, and has lost us.  He wants to bring us back.

And then unexpectedly, incredibly, wondrously…he calls out to us.

Do we hear him?

Lent is a time of prayer and penance, a time for sacrifice and soul-searching.  A time for taking stock of who we are, and what God expects of us.

We began this prayerful season as “the walking dead,” marked with ashes, bearing a reminder of our fate, hearing words that told us to remember that we are dust.

And here we are, five weeks later, confronting again our destiny.  But in the middle of all that, Jesus calls to us, as he did to Lazarus: “Come out!”

Now is the time for us to answer that call.

Now is the time to leave behind the stench, and the dark.

Now is the time to leave the dwelling place of the dead.

It is time to begin again – to get a second chance, like Lazarus.

It’s time to be reconciled with God.

Next Monday, April 18th, the day after Palm Sunday in the Diocese of Brooklyn, the Diocese of Rockville Center, the Archdiocese of New York, churches will be open from 3 pm to 9 pm and have a priest available for confession.  It’s an extraordinary effort to let all the faithful in this area be Lazarus – to let everyone who hears the call of Christ answer it, to stumble out of whatever tomb may be holding us, and emerge once again into the light.  Here at Our Lady Queen of Martyrs, we do something very rare – we have confession every weekday, and on Saturday.  If you’re in Manhattan, one of my favorite places to go to confession is down at St. Francis of Assisi on 32nd St, which offers the Sacrament of Reconciliation every day, even on Sunday.

So: take this opportunity to make this Lent matter.

Remember the woman at the well, and the beggar who was blind.  Both were transformed by one encounter with Jesus.  And remember, especially, Lazarus.  Remember how Jesus wept for him.  And remember how he then cried: “Come out!”

He is weeping for all of us.  He is calling to all of us.

Follow the sound of his voice. Grope toward the light.  It may seem like hope is lost, like nothing can change.  It may even seem to some of us like we are as good as dead.

But we aren’t.  We can begin life anew.  All of us can start again.  Just like Lazarus.

Hollywood knows that the great question that has compelled us since the beginning of time is: “What happened next?”

This Lent, we have a chance to write our own answer – to create a sequel to our lives, the next chapter in our story.

What will it be?