Several years ago, the PBS series “American Masters” decided to profile a true American master, Don Hewitt, the creator and executive producer of 60 MINUTES.   And the reporter asked him, what is the secret of the show’s success?  How has it endured for four decades as one of the top rated shows in America?

And Don replied: “It’s very simple.  It comes down to four little words.  Four words that every child knows: ‘Tell me a story.’”

I think he was getting at something fundamental.  We are storytelling people.  It is woven into our DNA.   We need to hear stories – and we need to tell them.  We need to share what we know, what we have experienced, what we believe.

Well tonight, we tell our story.   A story that began in darkness and ends in blazing, brilliant light. 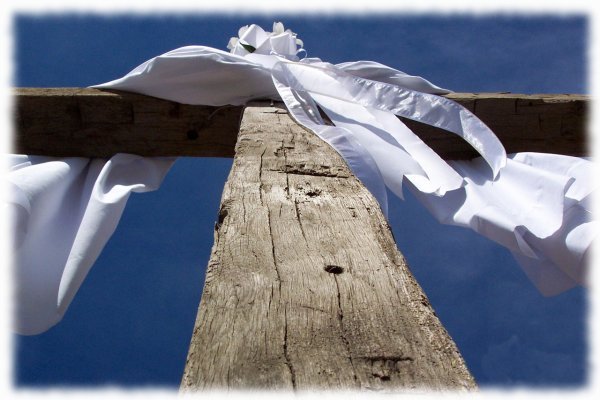 And it has been passed on, person to person, across the centuries, like that one great fire that tonight spread throughout this church and lit a thousand flickering candles. Tonight, it fills every heart here with something so incandescent, so luminous, it can only be called joy.

In this gospel, we hear how it all began:  on a morning in Jerusalem, when two women saw something incredible – and an angel told them to “go then quickly and tell his disciples” what has happened. And with that, the gospel began to spread.  The light was passed on.

And here, tonight, it blazes anew.  We continue to tell what happened.

Don Hewitt said the success of 60 MINUTES all boiled down to four little words.  Well, here are four more, four little words that have sustained us across two thousand years: “Do not be afraid.”

We hear that twice in this gospel – first from the angel, but then from Jesus.  They are his first words after his resurrection, his message to an anxious world.  Across two millennia, those words have uplifted a world torn apart by war, persecution and terror.  They have inspired martyrs and missionaries.  And they uplift us even today.  Some here will remember they were the first words spoken by Pope John Paul – soon to be Blessed John Paul — in his first homily as pope.  He was a man who had witnessed and experienced first hand some of the horrors of the last century. And yet, still he proclaimed to our own age, again and again: “Do not be afraid.”

It is a message that offers inspiration to so many – and should speak in a special way, I think, to those who are joining the church this evening: men, women and children who are walking their own journey of faith, often defying extraordinary odds.

They are people like Abby Johnson – who used to work as an administrator at Planned Parenthood, helping to facilitate abortions, until she saw, for the first time, an image of an unborn child on an ultrasound monitor.  She is joining the church tonight in Austin, Texas.

They are people like Ahdija Baker, who was raised Muslim, and survived the disaster of Hurricane Katrina, and went searching for a church where she could give thanks to God.  She is joining the church tonight in New Orleans.

And they are people Tom Leopold, a Jewish comedy writer who wrote for “Seinfeld” and “Cheers” and tonight will become a Catholic comedy writer, joining us in the Archdiocese of New York.

They are people like the 15 men and women here tonight who are joining us through the RCIA process.

“Tell me a story,” Don Hewitt said.  I think now, more than ever, the world is hungry to hear what we have to say.  It is desperate to know the Good News.  And the gospel for this vigil compels us: tell this story.  Bear witness, like the women at the tomb, and let others know.  Pray it.  Sing it.  Live it.

And be assured: we do not walk this road alone. After the women set out to tell the disciples, as Matthew puts it, “Jesus met them on the way.”  He meets us on our journey, as well.  He walks with us.  He welcomes us.  He encourages us and guides us.

So do not be afraid.  Tell this great story of this extraordinary night and all that it represents.    It is a love story…an adventure story…a story full of miracles and mystery and, best of all, hope.

Tell the world: he has been raised!

It really is the greatest story ever told.