Today’s gospel begins with an encounter between Christ and a blind beggar.  So I want to start off with a story of another beggar – a story, in fact, involving Pope John Paul.

Several years ago, a priest from the Archdiocese of New York was visiting Rome. As he was walking into a church to pray, he noticed a beggar at the door. Something looked vaguely familiar about him. As he began to pray, he realized what it was. 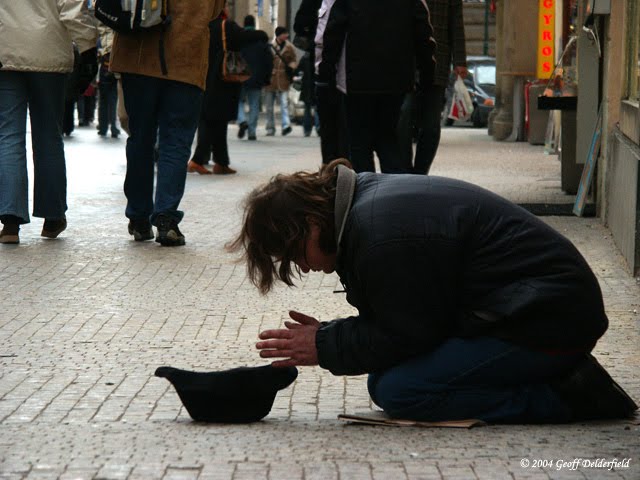 He went back outside. “Excuse me,” he said to the beggar.  “Do I know you?” “Yes,” the beggar said.  “I think you do.”  It turns out, the beggar had been in the seminary with him. He had been ordained a priest, but had – as he put it — “crashed and burned” in his vocation.

The priest from New York talked with him for a few minutes, and then had to go.  He promised the beggar that he would pray for him.   But he was shaken by what he had seen.

That afternoon, this priest attended a function that concluded with a chance to meet the pope.  As he stood in a receiving line and took John Paul’s hand, he told him about the man he’d met outside the church and whispered,  “Please, pray for this man, because he’s lost.”  The pope nodded and assured him he would.

The next day, to his amazement, the priest got a call from the Pope’s secretary.  The Holy Father, he said, was hosting a dinner and wanted to invite the priest, along with the other priest, the beggar.  Stunned, the priest agreed, and quickly went back to the Church and found the beggar and told him what had happened.

The beggar said, “No, I can’t.” The priest insisted, and promised to make him presentable.  He took the man to his room, where he was able to take a shower, and shave put on some clean clothes.

Then they went to dinner with the Pope – surely, the best meal the man had enjoyed in months. Just before desert, the Holy Father asked everyone else to leave the room, so he could be alone with the beggar.   They did, and waited outside.  After about 15 minutes, they were invited back into the dining room.  Shortly after that, they all said goodnight, and the beggar and the priest walked back to the hotel.

The priest said: “I have to ask you: what happened in there?”

And the beggar stopped in his tracks, still amazed at the experience. “He asked me,” the man said, “to hear his confession.  I said to him, ‘But I’m not a priest anymore.  I’m a beggar.’  And the Holy Father took my hands in his and looked at me and said, ‘So am I.  We are all beggars before the Lord.’”

The man tried to explain that he was not in good standing with the Church. But the pope said: “Once a priest, always a priest.  I’m the Vicar of Christ and the Bishop of Rome. I can re-instate you now. ”

Well, the beggar couldn’t refuse.  And at that moment, in that room, he heard the confession of the pope.

The beggar-priest had barely finished offering absolution before he dropped to his knees in tears.  “Holy Father,” he said, “will you please hear my Confession?”  And he did.

When they were done, the pope told him to return to the Church where he had been begging, and report to the pastor.  He would serve as a priest there, with a special ministry to the poor of Rome.

And that is what happened. It is said that the beggar who heard the pope’s confession still serves at the church in Rome.

“We are all beggars,” the pope said.  Like the man in today’s gospel.  So, this Lent, ask yourself: what am I begging for?  Maybe we are begging for compassion.  For mercy.  For peace of mind.  Maybe we are hungry for love.  And like the beggar in the gospel, we may also be blind – craving clarity, and understanding.  Wanting simply to see.

This gospel is about discovery.  One man receives the gift of sight.  As the story unfolds, light dawns, and with each confrontation and each conversation, he gains more understanding of just who gave him that gift.  At the end, for the first time, he sees — really sees.

I think the priest-beggar was also given the gift of sight – the ability to see anew who he was and what he was meant to do.  Whether he realized it or not, he was begging for more than money.

He was begging for grace.

But aren’t we all?

This morning, we pray for the grace to see more clearly, to understand more deeply, to live more faithfully.  And we join our prayers in a special way with those of the elect before us, the men and women of the RCIA process.  Together, we come before God, hands outstretched, asking to have our hungers satisfied, our yearnings fulfilled – asking God to give us what He knows we need.

“We are all beggars before the Lord.”

In these final weeks of Lent, let us pray to be open to what He has to give – to let Him touch us, and flood our lives with light.