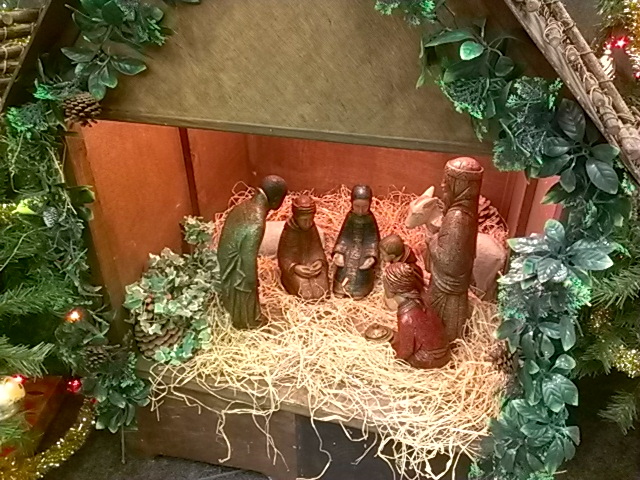 As some of you know, my office is located in the Catholic Center in Manhattan, on First Avenue.  On Friday they were decorating the lobby for Christmas – trimming trees and hanging lights and assembling a small wooden stable, the Nativity scene. As I was leaving work, I stopped to take a look.

This Nativity scene is a little out of the ordinary.  While it has all the usual characters, carved from wood – Mary, Joseph, shepherds, animals — it doesn’t have a manger.   Instead, the figures are arranged in a kind of semi-circle, and Mary is kneeling, with her arms outstretched – arms that, at Christmas, will hold the Christ child. But now, like all of us this Advent, she is waiting. Her arms are empty.

It’s a poignant image – and, I think, given the events of the last 48 hours, devastating.

In those outstretched arms, we can’t help but notice what is missing.   I looked at that figure in the crèche on Friday night and thought of the empty arms of the mothers of Newtown.

We are all Newtown this morning.  Those children are our children.  The indescribable heartbreak of those parents is shared by the world.

Ironically, in our liturgy, this third Sunday of Advent is a Sunday for rejoicing.  We put away the purple and wear rose.  The readings point with excitement to Christmas.  “Cry out with joy and gladness,” the psalm tells us.  “Rejoice in the Lord always,” St. Paul declares.  In the gospel, we hear for the first time the phrase that will define the Christian faith for all time: “good news.”

Yet, the news right now isn’t what anyone would call good.

We keep hearing words like “massacre” and “tragedy” and “slaughter.”  Mixed in, of course, is another word that we can’t escape: “Why?”  I wish I had an answer.  I can’t explain it.  I don’t think anyone can.

At times like this, God can seem distant, even detached.  Yet, this Sunday, we are reassured:  He is closer than we realize.  “The Lord is near,” Paul writes. And it’s not just because Christmas is 9 days away. It is so much more than that. In the great mystery we are about to remember at Christmas—the Incarnation, the Word made flesh—we celebrate this astonishing fact:  God became us. He invested Himself in humanity.

The implications are staggering.

On the five-year anniversary of 9/11, the great Presbyterian minister Timothy Keller spoke about the Incarnation.  I’d like to read you part of what he said:

“One of the great themes of the Hebrew Scriptures,” he said, “is that God identifies with the suffering. There are all these great texts that say things like this: If you oppress the poor, you oppress me. I am a husband to the widow. I am father to the fatherless. I think the texts are saying God binds up his heart so closely with suffering people that he interprets any move against them as a move against him. This is powerful stuff! But Christianity says he goes even beyond that. Christians believe that in Jesus, God’s son, divinity became vulnerable to and involved in – suffering and death! He didn’t come as a general or emperor. He came as a carpenter. He was born in a manger, no room in the inn.”

And then Rev. Keller adds this:

“But it is on the Cross that we see the ultimate wonder. On the cross we sufferers finally see, to our shock, that God now knows too what it is to lose a loved one in an unjust attack.”

On TV the other night, they showed the devastated father of a child, hearing the news of what happened and burying his face in his hands.

God is that weeping father.

“The Lord is near.” He knows what it’s like.

And He knows what we need: hope.  And He has given it to us. The Passion of His son assures us of this: death doesn’t have the last word.  We have been promised eternal life.  We live in the hope of one day seeing God face-to-face – and seeing in His reflected light those we love.

This is the real promise and joy of Christmas: the salvation that was made real on Calvary began in Bethlehem.

And so we wait for that beginning.  We wait for what will be— like that figure of Mary in a lobby on First Avenue.

We wait with open arms.

And in our waiting, we pray.  For the victims.  For their families.

We pray for the gunman and his family.

We pray for our country.

And we pray, especially, for the children.

I think one of the reasons that this terrible event struck all of us so deeply is that it was carried out against the smallest among us—the most trusting, the most hopeful, the most vulnerable.  Five, six, seven years old.

On Friday night, was there any parent who didn’t hold their child closer, who didn’t pray a little more deeply, who didn’t cherish even more profoundly the gift of life?

As I mentioned at the beginning: we are all Newtown this morning.  Those children are our children.  The wound is deep.

This morning, we pray for all the victims of Newtown, and we pray for those things we Catholics always pray for in times of mourning.  We pray for rest, for light, for peace.

It is a prayer whispered with the resilient hope of people who believe that God is with us.

The Lord is near.  He walks with us.  He weeps with us.

And so we pray:

Eternal rest grant unto them O Lord and let perpetual light shine upon them.  May their souls and the souls of all the faithful departed, through the mercy of God, rest in peace, Amen.