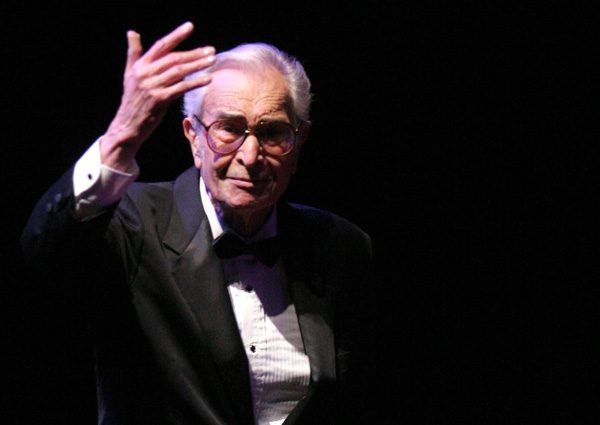 Last week, the music world lost a giant: jazz legend Dave Brubeck.  He died Wednesday, the day before his 92nd birthday.  He was the first jazz artist to sell a million records; he was only the second one, after Louis Armstrong, to make the cover of TIME magazine.

He was also a man of faith. In 1980, Dave Brubeck was baptized into the Catholic Church. He didn’t like to call himself a convert, since that implies that he converted FROM something, and he had no real religious background.

But there was a kind of conversion at work in his life.  And I think his decision to join the church echoes a theme in this Sunday’s gospel.

It’s about hearing.  And listening. And responding.

It began when Brubeck was commissioned to write a Mass made up entirely of jazz music. He thought it would be an interesting challenge.  He worked on it for a few months. When it finally premiered, it was widely praised. A priest told the composer how much he liked the music, but he was puzzled by something: why hadn’t he included in the music the Our Father?

Brubeck didn’t even realize the oversight. He thought about revising the score, but decided against it. It was finished, and he thought anything he wrote would disrupt the musical structure. He decided to just let it go.  But a few days later, something happened that made him change his mind.  While on vacation with his family, Brubeck awoke in the middle of the night, astonished: the entire Our Father had come to him in a dream, complete with orchestra and chorus.  He climbed out of bed, wrote it all out, and later added it to the score.

“Because of this event,” he said, “I decided that I might as well join the Catholic Church. Someone somewhere was pulling me toward that end.”

Advent reminds us:  we are all being “pulled toward that end,” all of us are being drawn to God. We are being called—called to follow. Called, like Dave Brubeck, to hear something unexpected.  Called, perhaps, to revisit what we thought was finished, and to add new music to our lives.

In today’s gospel, something like that happens to John the Baptist.

“The word of God came to John in the desert,” Luke wrote.  “John went throughout the whole region of the Jordan, proclaiming a baptism of repentance for the forgiveness of sins…”

The first thing to note is that John the Baptist listened.  And what he heard was the word of God—a word so overwhelming, he couldn’t keep it to himself. Like Dave Brubeck, John the Baptist heard a new music.

And he had to transmit it to the world.

This second Sunday of Advent, we might ask ourselves: what are we hearing?  Are we letting God’s message reach us?  There’s so much battling for our attention; just turn on the computer or TV or visit the shopping mall.

But some of it may not be out there, but in here, within ourselves—the noise of our own worries, of deadlines, of obligations and expectations, of ambitions and frustrations and the daily grind of living.

To all of this, Advent says: hush.Listen. The word of God is coming to us.

Which is why this season is so important: we need to make ourselves ready to receive what God is offering.  John cries out, “Prepare the way of the Lord!”  Are we doing that?  Or is John the Baptist’s voice another one being lost in the din of the season?

The call of Advent is a call to conversion.  It proclaims the path to a different way of living.  It points us toward a star, and a manger—and beyond that, to the cross.

It points, ultimately, to our salvation, and to a hope that will never die.

After he finally finished it, Dave Brubeck gave his unique jazz Mass a title.  He called it: “To Hope.”  It’s a title that has a beautiful ambiguity – “To Hope” can be a dedication, a toast, or even a verb. “To hope” is the Christian way of living.

And in the vocabulary of this season, it is something more than that. It is a direction.  Advent calls us to follow that direction. To look for the signs.  And to listen.

The word of God is pointing the way: