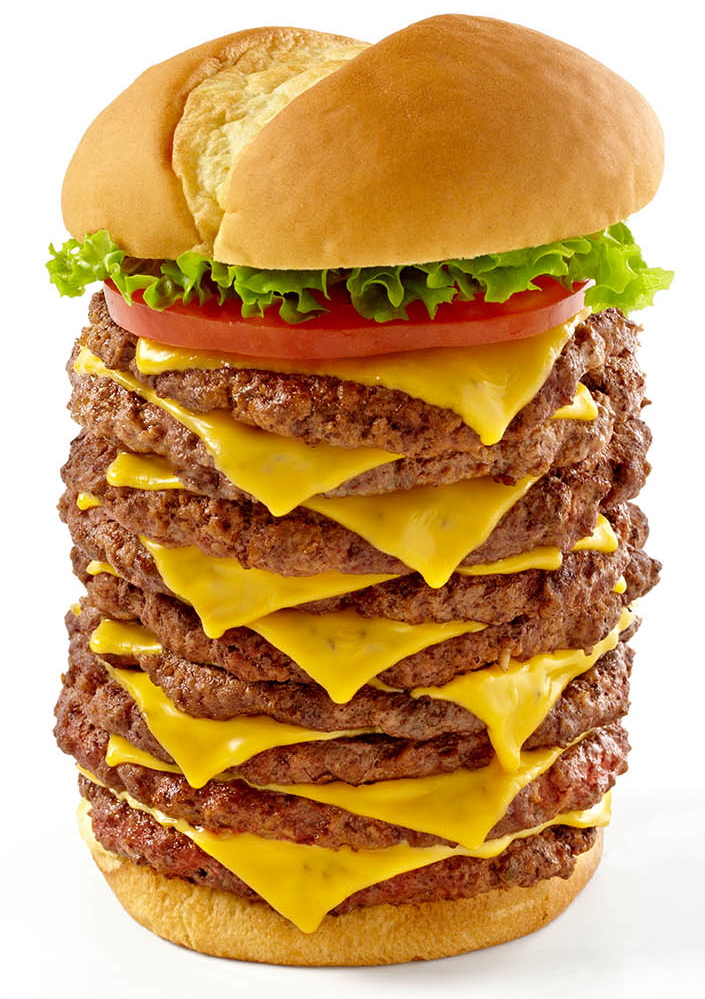 This was the kind of news all of us carnivores love – but it couldn’t have come at a worse time.

KHOU in Houston reports it has 5,100 calories and 117 grams of saturated fat. That’s about the same as six buckets of Kentucky Fried Chicken.

The price is $12.99. Coronary bypass surgery not included.

In “Hamlet,” Shakespeare famously wrote that “the devil hath the power to assume a pleasing shape.” I’m wondering if that includes nine hamburger patties on a bun.

And I wonder if this is anything like the devil Jesus encountered in the desert. I have no doubt: the temptations he offered Jesus were just as tantalizing and designed to make his mouth water.

Whatever they entailed, they are things all of us would recognize. And that’s one reason why Jesus resisted them.

In Luke’s account, there are three particular temptations – when you break them down thematically they amount to hunger, power and the absence of pain. Those are three of the most urgent desires any one can have. They go to the heart of who we are.

Hunger can be more than just a craving for a hamburger; there is the hunger for love, or for sex, for attention or for approval.

Power is about more than ambition or world domination or celebrity; it is also about control—not being accountable to anyone, and being able to do what you want whenever you want, however you want.

And the absence of pain is about more than just being protected by angels. It is also about  never feeling hardship, or sickness, or sorrow.

Think of what the devil is offering: total satisfaction…absolute power…total protection and comfort and ease. That would be irresistible to many of us. But not to Jesus.

And for one reason:

These are all things that would deprive Christ of his humanity.

In saying “no” these temptations, and not giving in to them, Christ is saying “yes” to being one with us.

He is saying: I will know what it is like to be hungry, to crave something that I can’t have.

He is saying: I will know what it is like to want power, but to be powerless.

He is saying: I will know what it is to hurt, and to bleed, and to die.

The final words of this passage are: “When the devil had finished every temptation, he departed from him for a time.” We don’t know what other temptations Jesus faced.

The same day they announced this new hamburger, the good people of Jake’s Wayback Burgers announced plans to expand their chain and build more restaurants. I don’t know if they plan one for Forest Hills. But for those of us fighting to stay away from red meat, I wouldn’t be surprised. That would be just like the devil, wouldn’t it?

But I’d be in good company. The devil continued testing Jesus, too.  Why should any of us be any different?

As we begin our journey through Lent, Luke’s gospel offers us this powerful reality: we do not go into the desert alone. We don’t go through life alone. We go with Christ. He knows what we are living with, and living without. He knows our appetites and our hungers, our insecurities and needs. Turn to him in moments of temptation or weakness. Take his hand. Receive his strength.

Look into his eyes, the eyes that have shed tears, and blinked away sweat and smiled at a wedding feast.

Turn to him—not just during Lent.

Turn to him when you think no one else will understand, no one can relate, no one can grasp what you are going through.

Jesus will. Jesus does.

But—as the temptation in the desert reveals—he is also us.