Sixty years ago, in the spring of 1952, Congress was in the middle of a long and controversial investigation into Communists in Hollywood.  The House Un-American Activities Committee was summoning writers, directors, and actors to Washington to get them to “name names” of people they knew with ties to the Communist party.  One of those they subpoenaed was the playwright Lillian Hellman.

Hellman declined to do what the committee asked, writing to the chairman words that became instantly famous.  She wrote:  “I cannot and will not cut my conscience to fit this year’s fashions.”

Over the course of her life, there’s a lot that Lillian Hellman got wrong.  But on this issue, she was right.

Now, 60 years later, her words are as relevant as ever.  For once again, conscience is in the news.  The American conscience, and explicitly the Catholic conscience, is being challenged.  Worse than that, it is being dismissed.

Last month, the Department of Health and Human Services ruled that all but a few employers will be required by law to provide health coverage that includes, free of charge, all forms of contraception.  This includes the morning-after abortion pill and sterilization services.

There are no exemptions for Catholic hospitals, colleges, schools or charities.

It is impossible to overstate the seriousness of this.

In a statement released last week, Bishop DiMarzio didn’t mince words.  He put it bluntly: “We should be outraged.”

Cardinal-designate Timothy Dolan said: “Never before has the federal government forced individuals and organizations to go out into the marketplace and buy a product that violates their conscience. This shouldn’t happen in a land where free exercise of religion ranks first in the Bill of Rights.”

Cardinal Roger Mahony of Los Angeles called it “probably the most expansive decision on the part of the US Federal government ever,” and added “I cannot imagine a more direct and frontal attack on freedom of conscience than this ruling.”

The toughest and angriest reaction came from Pittsburgh Bishop David Zubik.  In his weekly newspaper column he wrote – and I quote – ““It comes like a slap in the face.  The administration has just told the Catholics of the United States, ‘To Hell with you!’ There is no other way to put it.”

Other religious groups have been afforded exemptions in similar circumstances.  Quakers, the Amish and Christian Scientists, among others have had their religious principles respected when it comes to health care.   But as Cardinal-designate Dolan explained:  “By its decision, the Obama administration has failed to show the same respect for the consciences of Catholics and others who object to treating pregnancy as a disease.”

Let me put this another way: what this means is that the Catholic Church will, by law, be required to cooperate with practices that for centuries it has held to be gravely immoral.

The USCCB and bishops around the country are encouraging Catholics to write to their representatives, to sign petitions, to make their objections known.

I’d like to add to all that something else — a response that, amid all the anger and alarm, I think has gotten far too little attention.  Bishop DiMarzio mentioned it in his statement, and it is central to this Sunday’s gospel.  It is available to every one of us.  And it may well be the most powerful action any of us can take.

In Mark’s gospel, when Jesus was overwhelmed by the demands of the world – people seeking healing, hoping for miracles – he got up before dawn and went away by himself.   And he prayed.  There, in conversation with his Father, he was renewed.  He was revived.  He was given strength to do what he had to do – to take his gospel to other villages, out into the wider world.

That is our calling, as well.  But we cannot do it without God’s help.

And: we need to pray.

We need to pray for our country.   Especially now.

So, add this intention to your prayers.  Pray that this ruling will be reversed.  Pray that our elected leaders will respect the Catholic conscience, and our Catholic beliefs.  Devote a decade of the rosary to this.  Offer a fast.  Give up something for Lent for this intention.  Take this in your heart to God and pray that our freedoms will be preserved and protected. 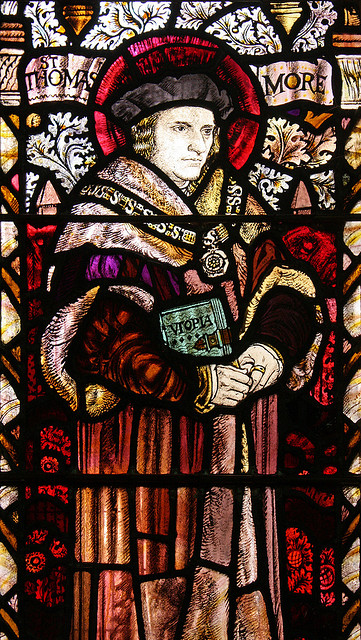 This goes far beyond whether or not someone agrees with the Church’s teachings about birth control and abortion.  But this is, in a fundamental way, a life issue.  This is about respecting the most personal and private aspect of human life: the conscience.  This is about protecting it.  Honoring it.  Defending it.

A great saint to remember is St. Thomas More, who gave his life for his conscience.  When Pope John Paul declared him the patron of statesmen and people in public life, he wrote: “The defense of the Church’s freedom from unwarranted interference by the State is at the same time a defense, in the name of the primacy of conscience, of the individual’s freedom vis-à-vis political power. Here we find the basic principle of every civil order consonant with human nature.”

My friends, this is so central to our human nature.  It is about our fundamental rights as human beings, as Catholics and, yes, as Americans.

It is about who we are.  What we cherish.  What we believe.

In 1952, Lillian Hellman said: “I cannot and will not cut my conscience to fit this year’s fashions.”

Sixty years later, neither can we.