Homily for January 1, 2012: Solemnity of Mary the Mother of God

A lot of us had our travel interrupted over the holidays – flight delays, cancellations, weather problems.  But none, I think, can compare with the story of Msgr. Steve Rossetti. 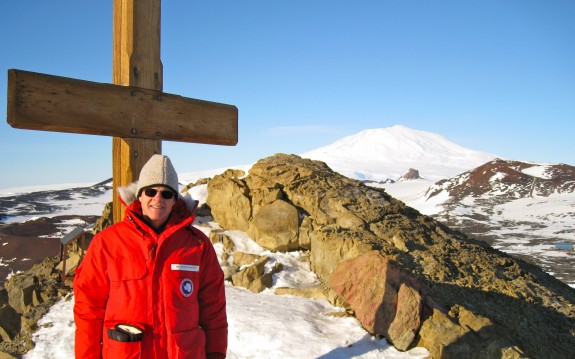 Msgr. Rossetti is a priest from the Diocese of Syracuse.  He teaches at Catholic University but every couple years, he goes down to Antarctica for a few weeks to serve as a chaplain to the researchers and personnel working at the South Pole.  This year, he went down in late November.  But shortly after he arrived, a storm moved in.  It became impossible for him to leave.

Instead of spending Christmas with family and friends, quaffing eggnog and unwrapping gifts in front of the fireplace, Msgr. Rossetti was at a research facility at the bottom of the earth, wearing a heavy parka, and leading a flock that included countless penguins just outside his door.

He blogged about his experience for CNN, and had this to say:

“One could see this storm as a random event and my being weathered in at the South Pole simply as an act of nature,” he wrote. “But for the first time, a chaplain will be here on Christmas Day to celebrate the birth of the Son of God. I cannot plan it; I can only accept whatever comes. Each day, we will look out and see what has been planned for us.  Isn’t this the case for each of our lives?”

A lot of us would have been angered, or even depressed, at having our Christmas plans changed.  But Msgr. Rossetti saw a lesson there – and one, I think, that couldn’t be more timely.  One of the fundamental truths of the Nativity story – and something we encounter in the readings today – is not just the idea of life beginning…but of life interrupted.

The Nativity is also a story of plans being changed, of destinies being rewritten.

Of human history being altered forever.

The shepherds watching their flock on that silent night had no idea the silence would be broken, and the world shaken, by the arrival of angels.  They didn’t expect the news they heard, or the journey took, or what they finally encountered in Bethlehem: the savior of the world, coming to us as a baby, in a manger.

Life happens.  Plans change.  And our world is turned upside down.

One morning, a young girl in an anonymous village in a forgotten corner of Galilee woke up to begin her day – to do her chores or say her prayers.  She could not have imagined how her life, her future, her plans, would change – how her day would be different than any other since the dawn of time, how the months and years that followed would take her places she never dreamed.  To motherhood.  To Bethlehem. To Egypt.  To Calvary.

The girl who woke up in Nazareth on that morning nine months before could not have imagined what was in store:  that she was about to become the most important woman in human history – the woman we honor this Sunday as the Mother of God.

But, of course: life happens.  Plans change.  And God intervenes. 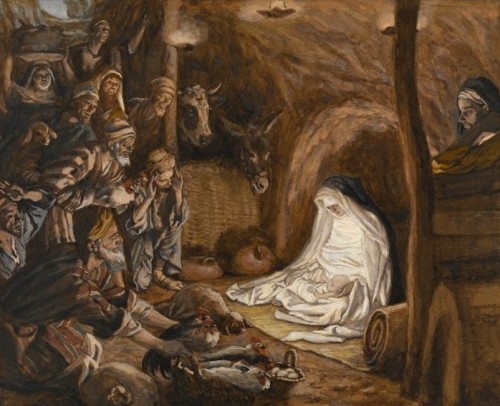 This day, New Year’s, is about making plans.  We draw up lists and jot down resolutions.  But how often do they go unfulfilled?  How many resolutions that we make today will be forgotten by February?   We may hope to arrive at some particular destination, to achieve some goal, by next December 31st.

But so often, God has something else in mind.

Just ask the shepherds.  Ask Mary, the Mother of God.

As the old Yiddish saying goes: if you want to hear God laugh, just tell Him your plans.

We so often find ourselves where we never expected — accompanied by holy laughter.

It may be that some of you never expected to find yourself here, in this church, this day.

But here you are.  Making another stop on a lifelong journey.

Just before Christmas, after mass, a woman stopped me outside of church.  She’d heard me mention RCIA in my homily.  She told me she was Catholic but had been away for a long time.  She asked me: should she sign up for RCIA?  Is there some special group she needs to join?

I asked if she’d received all her sacraments – baptism, first communion, confirmation.  She told me yes.

“Well then,” I said, “You’re already here.  Welcome home.”  She told me that her brother had been pleading with her to go back to the church.  She promised him, that this year, she would.  That Sunday was her first time at Mass in years.

I asked her if she’d been to confession, and suggested some places she could go.  “Come back soon,” I told her.  “We’ve missed you!”

And so this day, I want to say that to anyone here who may be making a similar journey.

Welcome back.  We’ve missed you.

I know, from my own experience: life’s road is often crooked.  Sometimes, the path wanders. We might drift from the practice of the faith, or think it’s inconsequential, or decide it’s just not relevant.

But when we think that way, we are wrong.  Believe me.  I know.   Our lives are enriched, strengthened, sanctified by being in this sacred place and receiving the sacraments — most of all, the Eucharist.   Dorothy Day, who was received into the Catholic Church 84 years ago this week, once wrote:  “Feeding at that table – the altar — has nourished my soul so that there is life in it.”  It is life we all crave.  And it is here, waiting for us, along with God’s tender mercies.

So, if you’re looking for resolutions worth keeping this new year, let me make it simple for you.  Resolve to make going to Mass, going to church, a habit – not just once or twice a year.  But every week.  Resolve to pray, every day – and not just to ask God for a favor.  Resolve to make your life a conversation with God. To listen to what He has to say to you.   To be reconciled to Him.  Resolve to go to confession.  To receive the Eucharist.  To commit to this moment, this hour, one day a week.

Resolve to grow in grace.

Resolve to live the life that God has dreamed for you.

You may be surprised at what will happen.

Sometimes it may not be what you had expected.

Sometimes, as Msgr. Rossetti found, it can even take you to the bottom of the world.

But know this: God won’t leave you there alone.

If you don’t believe me, just remember the woman He chose to bear His son, and who became the Mother of God.

Through every struggle, every pitfall, every pilgrimage, He was with her.  Through every sorrow, every joy, every setback, every heartbreak, God never abandoned her.

Her journey was never solitary.  She was never alone.

And neither are we.

Remember that this day, as we begin a new year, and tear another page off the calendar, and start anew.  There is no better time than here and now to make of our lives something fresh, and wondrous, and even holy.

It isn’t always easy, and the journey isn’t always smooth.  There may be delays and setbacks, diversions and detours.

But we all hope to arrive at the same destination.

We all hope and pray that we may one day — like the shepherds and like Mary – gaze upon the face of God.

Image above: “The Adoration of the Shepherds” by James Tissot