If you’re looking for an improbable heroine for the Catholic faith, you couldn’t find anyone more improbable than 22-year-old Leah Libresco.

Leah grew up Long Island.  Her family had no real religion to speak of.And it wasn’t until she went to Yale that for the first time she actually got to know Christians. It was a shock to discover that they weren’t all like Jerry Falwell.  It was even more of a shock when Leah – an avowed atheist — started to date a young man who was Catholic. But she made a pact with him: she would go to Mass with him if he would go to ballroom dance class with her.  She read books he recommended by C.S. Lewis and G.K. Chesterton, and she began debating anyone and everyone about religion.

She started a blog called “Unequally Yoked,” taking its name from a line in Paul’s letter to the Corinthians: “Do not be unequally yoked with unbelievers.”

Her relationship with the Catholic didn’t last. But her curiosity about his faith did.

In time, her blog became spectacularly popular; Leah was seen by some as a big-brained, sharp-thinking New Atheist of a new generation – questioning Christianity day after day with mathematical precision and enthusiastically engaging readers in philosophical debates about morality, logic and ethics.

So what happened two weeks ago made headlines around the world and left a lot of people simply stunned.

On her blog, Leah Libresco announced that she had begun taking RCIA classes at a parish in Washington, DC.

One of the world’s most widely read young atheists was converting to Catholicism.

In the days after her announcement, she was interviewed by CNN and religion writers.  The blog post announcing her conversion logged over 150-thousand hits, and it’s still climbing. Atheists couldn’t quite believe it – but, then, they don’t quite believe anything anyway. Catholics were overjoyed.

One Catholic blogger wrote: “Welcome. I know this was hard, and will continue to be so. Don’t worry if the Catholics make it as difficult for you as the atheists. We only do it to people we love.”

Leah Libresco joins some illustrious company of former atheists – including C.S. Lewis, Edith Stein, and the late Cardinal Avery Dulles.  But beyond that, there is this remarkable idea: she is a woman who stands in happy defiance of the expectations of the world.  Young Yale-educated feminist atheist intellectuals aren’t supposed to become Catholic.

But Leah is doing just that.

Her journey won’t be easy. She still has a lot of questions and misgivings. But this weekend—in the middle of her searching and questioning, just two weeks after her dramatic announcement—she will be sitting in a Catholic church and encountering, along with all of us, this simple and unwavering declaration from the gospel:

“Do not be afraid. Just have faith.”

In the reading from Mark, what followed those words was a miracle – one that defied all logic, all science, all rational thinking.

But God works that way. What seems incredible becomes true.  Even those thought to be dead live.  Miracles abound.

Do not be afraid.  Just have faith. 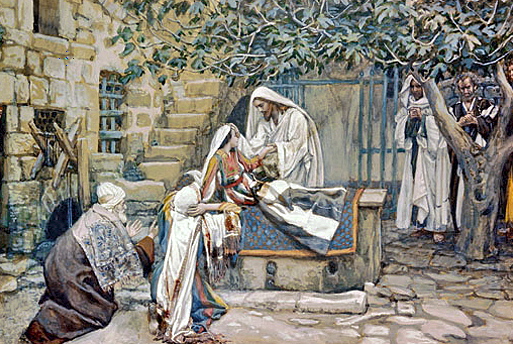 This gospel calls out to all of us who struggle, who question, who search, who doubt.   It cautions us to surrender all of that and just trust.  In a way, it echoes the familiar phrase of the recovery movement, challenging us to “let go and let God.“ Let go of skepticism.  Let go of cynicism and all the “yeah, buts” that get in the way.  Let God do His work.

And why shouldn’t we? The scripture readings today remind us of something we often forget: God roots for us.  He roots for life.  He is forever on the side of hope.

“God did not make death,” the reading from Wisdom tells us, “nor does he rejoice in the destruction of the living. For he fashioned all things that they might have being…”

So, to all who are feeling despair, or worry, or fear: do not be afraid.  Just have faith.

Have faith. Because with God, the impossible becomes possible.  We are a church that believes in renewal, transformation, continual conversion.  Bread becomes Christ.  Atheists become believers. Those we thought were lost forever are only asleep, waiting to be called awake.

This day, as you receive Christ in the Eucharist, remember all those praying to receive him —in whatever way they can.  Pray for all those around the world struggling to believe.  Some may be in this church today.  Maybe you are one of them.  Pray for patience.  Pray for trust.  Pray to just have faith.

And pray, too, for all the Leah Librescos of the world.

She said the other day that she has begun praying the Liturgy of the Hours, and has adapted as her daily prayer the famous words of St. Patrick’s Breastplate.  In our anxious age, those words call out for Christ’s companionship, his comforting presence as we continue our journey:

With words like those in our hearts and on our lips…do not be afraid.