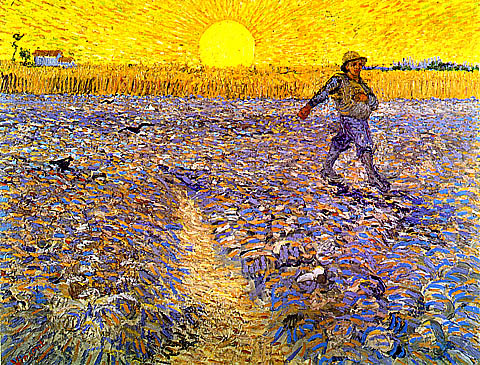 Those simple words begin one of the most memorable parables in the gospel – a story that has much to teach us not only about gardening and growing, but also about listening.  Listening to the Word of God.  Being receptive to it.  Being open to it.

That can be hard to do, when there is so much noise in the world distracting us from God and trying to drown out His Word.

But there is something striking and very hopeful to this parable that I’d like all of us to consider this morning.

This is a story about God’s extravagant generosity – and His boundless love.

I think of one of my heroes, Thomas Merton – a jaded, jazz-loving, cigarette-smoking, girl-chasing writer who drifted from being an indifferent Protestant to being a communist – and then, in the middle of his wanderings, discovered the poetry of the Catholic writer William Blake.  That led him to explore the Catholic Church and eventually to convert. He fell madly, deeply in love with God.  Merton became a Trappist monk and writer.  He stands today as one of the influential Catholic writers of the 20th century.

She joined the Church a few months later, along with her husband.

She now has a blog titled, appropriately, “Garden of Holiness.”Christie Martin is now tending her own “garden,” growing a beautiful harvest that is reaching people around the world.

This morning, every morning, God sets about doing His great work: a Sower goes out to sow.  He sows in a world tangled with doubt and disbelief, shaded and clouded by forces that don’t want the seed to grow, that would prefer that the planet be an arid desert.

Are we ready to help His garden grow?