[Note: The Deacon’s Wife and I are headed out on vacation Saturday morning, to someplace warm and sunny with lots of water.  I’m not bringing my laptop, and hope to spend as little time as possible in front of a keyboard and computer screen.  But I’m leaving behind a few postings for those who may drop by from time to time.  Most are items from the last few years that people seemed to like.  Below is the first entry.  It’s actually a homily that I delivered three years ago on the 17th Sunday in Ordinary Time, but the readings are the same.  — Dcn. G. ] 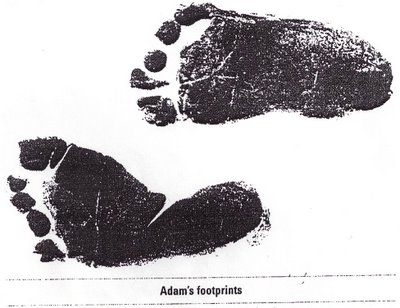 A lot of women have difficult pregnancies. But I can’t imagine any more difficult than the one endured by Amy McNamara.

She’s a friend of Jack Smith, a writer for the Kansas City newspaper, the Catholic Key, and he told her story recently on the paper’s blog.

In 1994, when Amy was three months pregnant with her first child, her doctor told her that the baby had anencephaly, a neural defect. As a result, part of the baby’s brain, and skull, would never be formed. It happens in about one out of every 200-thousand pregnancies. There was nothing medical science could do.

Amy was told the baby would die soon after birth.

She had the option of terminating the pregnancy, having an abortion. But Amy McNamara chose not to. She carried the child for another six months and then, finally, gave birth.

A few days later, friends and relatives received the following notice in the mail.

Amy and Patrick enclosed a note:

“Our son brought an immeasurable amount of joy into our lives. When we miss Adam and sadness begins to descend, we recall this joy and pray that the strength of this memory will sustain us.”

And Amy wrote a poem about her son, which she gave to her husband on his first Father’s Day, just a week after Adam was born.

Today, 15 years after Adam’s brief life and early death, the McNamaras continue to celebrate and remember their first son’s moment on earth. They have a box of mementoes and pictures, and have made sure that their other children know about Adam and his gift to the family, the gift of brief, beautiful joy.

I’m sure there are those who will say, his life didn’t count for much. That it wasn’t really a life at all.

But – as the gospel reminds us this week – there are miracles and wonders that stand in defiance of all that.

A little boy gave Christ the leftovers of a meal, and from that He created something spectacular. But the miracle of the loaves and the fishes didn’t end when the meal was finished.

When it was over, Jesus offered his disciples this instruction – one so simple and practical, it almost seems like an afterthought.

“Gather the fragments left over,” he told them, “So that nothing will be wasted.”

That may be one of the most consoling and most hope-filled lines in all of scripture. Jesus isn’t just being tidy. He isn’t being “green.” The wondrous, miraculous fact is: nothing, to God, is too small. He uses everything, and everyone. Every fragment of us.

Even a fragment as tiny, and as feeble, as Adam Christopher McNamara.

This gospel is usually understood as a foreshadowing of the Eucharist – showing how Christ can and does feed multitudes. We are part of that multitude this very day.

It is a multitude that includes saints and sinners, the hope-filled and the hopeless, doubters and believers. And it includes many who feel forgotten. Those who may feel left out, or left over or, maybe, overlooked. The sick, or sick of heart. The unemployed. The anxious. The lonely.

In all that is happening in the world and in our lives, so many of us feel unaccountably small and, perhaps, worthless.

But God doesn’t miss a thing. He will not let us be lost.

“Gather the fragments left over, so that nothing will be wasted.”

Even the tiniest crumbs matter.

Even the smallest life.

Even the briefest existence.

When you consider the miracle of the loaves and fishes, remember this. Remember how God made so much out of so little. And that nothing will be wasted.

Everything, and everyone, is part of the miracle.

And the miracle goes on.