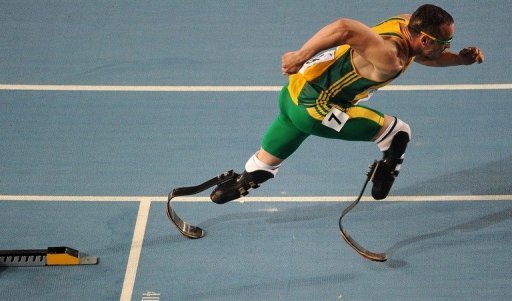 For audio of this homily, click the green arrow below.

Last week, you’ll remember, the gospel told us what faith could achieve – miracles that could even restore health and give life.

But this week, we’re reminded of what happens when we lack faith.

What happens is…nothing.   When Jesus returned to his native place, those who knew him took offense.   They lacked faith and, as the gospel notes, “he was not able to perform any mighty deed there.”

Faith can never be underestimated. The power of belief, of faith—our ability to let God amaze us—transcends anything we might be able to imagine.

Oscar Pistorius was born in Johannesburg, South Africa, in 1986.  But he was born deformed: neither of his legs had the fibula, the slender bone running along the leg from below the knee down to his ankle. His parents consulted with various doctors, weighing their options.  When he was 11 months old, they made the heart-wrenching decision to amputate both of Oscar’s legs below the knee.  Doctors said it would be less traumatic if he lost his legs before he could walk.

At the time, no one could predict what kind of future he would have, or if he’d have much of a future at all.

Few expected he would go on to make history.

Six months after his surgery, he received his first set of prosthetic legs.  Within weeks he had mastered them and – incredibly – had learned to walk.

In time, he was not only walking; he was running. The child who should have been in the eyes of the world a cripple became, instead, a champion athlete.  In time, he helped develop a new kind of prosthetic leg dubbed the “Cheetah” – and within months he was shattering records.

Just last week, he made headlines around the world. The International Olympic committee voted to make him the first double amputee to ever compete in the Olympics.

He has defied the experts, the doubters.  And his remarkable story forces us to rethink all our own preconceptions.

How many people today see people who are disabled and look away?  How many consider them helpless, or hopeless?

How many of us are too often skeptical of what we don’t recognize, or dismissive toward people who are different?

How many of us would have written off a young Oscar Pistorius as a lost cause?

How many of us reject what we can’t understand?

Just as the people in his hometown did 2,000 years ago, how many of us today – for similar reasons — still reject Jesus?

Oscar Pistorius doesn’t.  He describes himself as an evangelical Christian – a man of faith.  It is faith that has helped give him resilience, and determination.   He even has a tattoo on his back, quoting Paul’s first letter of Corinthians, chapter 9:

“I do not run aimlessly; I do not fight as if I were shadowboxing. No, I drive my body and train it, for fear that, after having preached to others, I myself should be disqualified.”

His faith is an inspiration – and it is a faith that has given him legs to stand on.

While he has stood, he has also stood up —to doubt, mistrust, anger, criticism. Some athletes have argued that his prosthetic legs have given Oscar an unfair advantage in competition.  But repeated tests have failed to prove it, which led to the decision last week to allow him to compete.

Another runner — a competitor and friend – once described Oscar Pistorius’s own personal piety.  Before a qualifying race, as they were warming up, Oscar pulled him aside and quietly asked him to pray with him.  His friend was impressed, but not surprised.  Oscar, he said, was the only person he could think of who would do something like that.

And so are we all.  If we think of our own lives, we all can think of problems that have been put in our way –obstacles we’ve had to overcome, or handicaps we’ve had to address, or weaknesses we’ve had to confront.  In the letter to the Corinthians that we heard today, Paul described one of his weaknesses as a “thorn in the flesh.” But he realized that God’s grace will sustain him through any trial, despite any weakness.

“My grace is sufficient,” the letter says.

They are words we should remember – and not just because they are good words to live by.  They are also words that will soon have special significance for this parish.

As we gather around the Lord’s table, that place of abundant grace, let us pray for that kind of faith.  Let us never forget what God’s grace has done for us – and what it can still do.

When we are feeling weak, or helpless…God’s grace is sufficient.

When we are feeling rejected or despised, even by those who know us and love us…God’s grace is sufficient.

When we do not feel like we can stand on our own…God’s grace is sufficient.

When we need help to run the race…