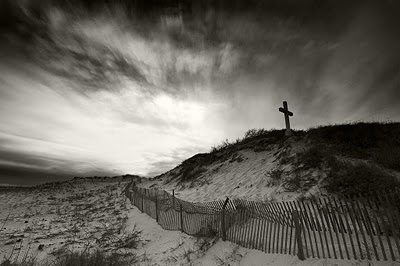 This year, as we celebrate our parish centennial, we’ve been marking key dates – the day of the groundbreaking, the day of the first census and so on.  We’ve been big on anniversaries, commemorating our beginnings.

Well, here’s another anniversary, coming up later this summer. It goes back further than a hundred years.  It isn’t directly tied to this parish – but it does have a connection to every one of us here this morning.  The date is August 15, 1559.   On that day, the Feast of the Assumption, for the first time ever a community of believers – conquistadors from Spain — held a Christian religious service in what would become the United States of America.

The place was Pensacola, Florida.  And the service was a Catholic Mass.

If you visit Pensacola today, you’ll find a large concrete cross on a beach marking the spot where that Mass was celebrated.  If you really want to know our roots – and the roots of all of us who gather in churches around the country to pray and worship and give thanks to Almighty God – it’s there.

What happened on that beach over 400 years ago happened within a settlement, a community. As a result, the people gathered there became, in effect, the first parish.

History did not record who the priest was who said that Mass.   We don’t know if they took up a collection. It’s fair to say they didn’t have any trouble finding a parking space, and nobody complained about the air conditioning.

But from that small band of believers, here we are. The Catholic Church in America took root, and grew. What began with a handful of Spanish conquistadors on a sandy strip of land now numbers close to 70 million men, women and children, from every country, every nationality, every walk of life.

And that phenomenon is part of the message in today’s gospel. Jesus compared the kingdom of God to a mustard seed – “the smallest of all the seeds of the earth” – but one that grows so large that the birds can nest and “dwell in its shade.”

When you consider how the faith has grown, how our Church has spread in this country and around the world, it comes down to this startling but beautiful idea:

We are people of the mustard seed.

We are people of the mustard seed because God’s kingdom, the kingdom we are striving to build on earth, is one that actually embraces smallness.  It is the kind of a kingdom that understands humble beginnings, and littleness, and meagerness, and simplicity.

It is a kingdom that has roots, and branches, and shade.

But that isn’t where it ends.

It spreads.  It grows.  It becomes a haven and a shelter for those who need it, so birds from all over can “dwell in its shade.”

It is a place of possibility, of hope.   And it begins from something so small you might easily dismiss it, or overlook it.

But that is who we are. We are people of the mustard seed.

One of the many challenges we face is to nurture that seed—to be patient with it, to help it grow and to protect it.   Sometimes, God’s kingdom grows slowly.  There can be obstacles and setbacks.  Strong faith is often tested by the dryness of doubt, and battered by storms.

Consider our faith, our church. This place of shelter, a place of love and mercy,  isn’t universally admired.  Those of us who are a part of it face skepticism, criticism, condemnation, even persecution.  We have seen it in the past.  And we are seeing it today.

But scripture reminds us that God’s kingdom, no matter how humble its beginnings, or how difficult its challenges, will thrive. And St. Paul reminds us, too, of something you might even call transcendent.

“We are always courageous,” he wrote, “for we walk by faith, not by sight.”

Faith, not sight, guided the men and women who built this parish a hundred years ago.  They could not have imagined what we see around us today – that an empty field along a gravel road in a God-forsaken corner of a place called Queens would one day be home to a church like this.

Faith, not sight, sustained the conquistadors who worshipped among the sand dunes in Florida 453 summers ago.

And faith, not sight, stirred the hearts of those who heard a carpenter tell stories of seeds and trees and birds in Galilee 2,000 years ago.

What sometimes seems so unlikely…improbable or even impossible…can and does grow into something monumental.

Given time, and trust, and faith, it may even change the world.

And we have been, from the beginning.  We endure.  We grow.  We reach out to those who need shelter, and protection, and shade – offering blessed reminders, a witness, of the mercy and love of God.

And, against all odds, we prevail.

That is our faith – and our hope.

The cross in the sand of Pensacola was placed there over 50 years ago, to commemorate the 400th anniversary of the first Mass in America.  It has survived hurricanes, tropical storms, tidal waves, and wind.  And still it stands – a testament to a small band of believers who knelt on that ground and looked up to see a piece of bread transformed into the Body of Christ.  They brought the Eucharist to a New World.  They brought a faith in what they could not see, and a belief in a mystery they could not comprehend.  They brought the gospel that we still hear, and act on, and live out this day.

They planted the seed of God’s kingdom in this country.

It is up to us to nurture it, and protect it, and see that it continues to grow.