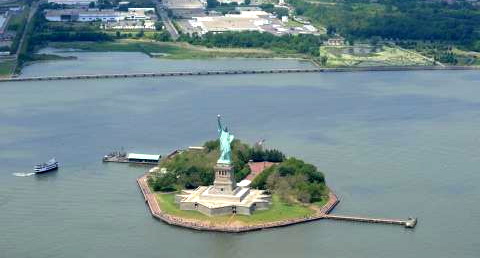 I spent most of last week in Denver for a conference, and flew home late yesterday afternoon. Approaching New York, our plane took a path up the Hudson, to circle around toward LaGuardia. As we began our descent, we swept over parts of New Jersey, and then turned toward Manhattan. Looking out my window, I could see the Statue of Liberty. I’d never seen it from the angle before: it was almost directly below our plane. When you see it on land, or from a ship gliding down the river, it’s enormous. But from above, it looked surprisingly small, almost insignificant. It was easy to miss.

The image was striking – and sobering: Lady Liberty was easy to miss.

At this moment in our history, we run the risk of treating liberty, particularly religious liberty, as something small, almost insignificant. We take it for granted. We shouldn’t.

Many of you probably know the U.S. Catholic bishops have set aside these next two weeks to mark a “Fortnight for Freedom,” focusing our energies and prayers on religious freedom, and what many fear are growing threats to that freedom.

Some people think the bishops are overreacting. I’m not so sure.

In Alabama two years ago, the state enacted one of the strictest immigration laws in the country—one so severe, it would have made it illegal for a Catholic priest to baptize, hear the confession of or preach the gospel to an undocumented immigrant.

In three cities and one state — Boston, San Francisco, the District of Columbia, and the State of Illinois– local Catholic Charities has been driven out of the business of providing adoption or foster care services because those Charities refused to place children with same-sex couples or unmarried opposite-sex couples who live together.

In New Jersey, a judge recently ruled that a Methodist church violated state law when it refused to perform a same sex marriage for two women on private property.

And, of course, there’s the HHS mandate, set to take effect later this summer. It compels religious institutions to go against their teachings and requires them to provide in their health coverage free contraception, including the “morning after” pill.

Again and again, laws enacted in this country see religious principles as something dispensable or expendable.

More and more, personal religious belief is being challenged.

Which makes the question at the heart of today’s gospel not only timely – but urgent.

Here and now, Jesus asks us the same question he asked Peter two thousand years ago.

Who do we say that Christ is?

What do we believe?

What do we stand for?

What do we stand against?

The answer has consequences.

“If anyone wishes to come after me, he must deny himself and take up his cross daily and follow me.”

How often we don’t want to carry that cross. How often we put it in the closet or store it in the attic and try to forget it. Crosses are difficult, inconvenient, cumbersome. They get in the way.

But, the cross is part of the package.

The inconvenient truth is this: the Christian life has never been easy. It calls us to obedience, to sacrifice, to faithfulness, and to love. Those qualities have served to transform the world – and the church has done that across 20 centuries, despite persecution and discrimination, despite marginalization and martyrdom. It has done it despite efforts throughout history to see religious freedom limited or even outlawed.

But: we need to continue the work we are called to do.  We are Christians. This is who we are. It’s what we believe.

We follow a God who gave sight to the blind and resurrection to the dead.

We follow Jesus, who loved us enough to die for us.

We preach a gospel that tells of salvation and hope.

That is our call, and our great shared vocation as Christians—a vocation that often stands in contradiction to the values of the world.

At this moment, I think, we need to stand for religious liberty. This goes far beyond politics –beyond who you vote for or what party your endorse. It goes even beyond religion.

It lies at the heart of who we are.

Last year, visiting the Middle East, Pope Benedict called religious freedom, “the pinnacle of all other freedoms.” It is a sacred and inalienable right. And he explained: “It must be possible to profess and freely manifest one’s religion and its symbols without endangering one’s life and personal freedom. Religious freedom is rooted in the dignity of the person; it safeguards moral freedom and fosters mutual respect. No constraint in religious matters…is permitted.” And the pope added: “Such constraint, which can take multiple and insidious forms on the personal and social, cultural, administrative and political levels, is contrary to God’s will.”

Over the next two weeks, and even beyond, keep this intention, religious freedom, close to your heart. Pray about it. Pray for all who believe and who suffer for that belief, here and around the world.

Pray that each of us may have the courage of our convictions. In many places right now, the laws are not on our side.

Pray for our country.

Pray that we don’t take our religious liberty for granted.

Today Jesus asks each of us a searing question – and he asks us to make a choice.

What do we really believe?

What do we stand for?