In April of 2005, an Army captain by the name of Scott Smiley found himself where most people would not want to be: in Mosul, Iraq, confronting a man in a car who fit the description of suspected car bomber.  Captain Smiley knew what to do.  He told the man to get out. The man held his hands up for a moment, but then he let his foot off the brake. The car began to roll.

And that was the last thing he saw. 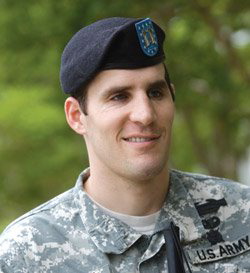 When Scott Smiley finally awoke two weeks later, the world was complete blackness. The bomb had sent shrapnel into his brain. He was blind, and terrified. Over the next few days, as he realized that he would never see again, fear began to take hold. Would his wife still love him? Would his men still care about him? How could he live this life?  Fear gave way to anger.  He was angry at life, angry at God.  How could this have happened to him?  He questioned God, questioned His existence, and spent months in a deep depression.

But in the middle of his dark rage – literally, his dark night of the soul – Scott Smiley finally turned to one thing, the only thing, that he thought might be able to sustain him.

Out of that prayer, Scott Smiley gradually received the strength, and the grace, to begin rebuilding his life.  He took to heart the words of St. Paul – “I can do all things through Christ who strengthens me” – and was determined to do what no one else thought he could.

Over time, Scott earned an MBA.  He overcame the initial finding that he was unfit for duty.  With the support of his friends and family, and the help of a three star general, he became the United States Army’s first active-duty blind officer.  And he’s written a bestselling book about his life, called “Hope Unseen.”

To this day, he credits his extraordinary recovery and resilience to his trust in God.  And it was all made possible, he says, because of prayer.

This Sunday, World Communications Day, the scriptures remind us of the power contained in the most immediate tool of communication: prayer. It is the vital, ongoing conversation we have with God.

Indeed, we are privy to part of Christ’s conversation with his Father in today’s gospel, which offers us part of Christ’s great prayer before he begins his passion and death.  It’s been called the “high priestly prayer” of Jesus.  But it is the first reading, from the Acts of the Apostles, that I think shows us the importance of prayer for our lives – to sustain us and to comfort us.

Consider the context.  Jesus has just ascended to his Father.  The apostles are now utterly alone.  He’s told them to stay in Jerusalem, where they will be “baptized with the Holy Spirit.”  They have no idea what this means, what it will entail, how it will change them.  They don’t know what will happen next, or how they will even begin to carry out the great commission.

Yet, at the moment of greatest uncertainty, the disciples turned to the one thing they knew could help them.  Like Captain Scott Smiley, in their darkness, in their blindness, they sought guidance the only way they knew how.

As the scripture puts it: “They devoted themselves with one accord to prayer.”

Their prayer would not be answered overnight.  It would be nine days before Pentecost would fulfill would Christ had promised.  But they did not give up.  They didn’t stop praying — praying for guidance, for wisdom, for “hope unseen.”

They didn’t give up.  And neither should we.

The psalm today offers us this great inspiration to all who are shadowed by darkness or despair:

“The Lord is my light and my salvatio

whom should I fear?

The LORD is my life’s refuge;

of whom should I be afraid?”

The scriptures cry out to us: trust and pray.  Trust in God’s generosity and mercy.  Trust in His plan for our lives.

And in the midst of our darkness, pray for light.

The disciples could not have imagined what was to come – or the astounding history that would unfold:  the millions of lives that would be changed by Pentecost, across thousands of years.  How that inspired moment of grace would come upon them like tongues of flame and ignite a revolution.  The churches that would be built, the universities that would be erected, the hospitals and missions and charities that would fan across the world in the name of Jesus Christ.

But in those mysterious days before Pentecost, all the disciples knew was a future that was clouded with doubt and mystery.

And all they could do was pray.

That is the great legacy, and lesson, of this Sunday between Ascension and Pentecost.

It comes down to one word: pray.  Significantly, the disciples didn’t just practice prayer alone.  They also did it in community.  They turned to others for help and support.

Our great communication with God – our ongoing conversation with him – happens both singularly, and collectively. Communication also happens in community; we are the Body of Christ, and that means we are, together, not only his hands and his feet.  We are also his voice — to one another, and to the world.

As Scott Smiley understood – as the disciples understood – sometimes the greatest hope is unseen.   But trust in this: no matter how deep the darkness, the light we crave will come.

The disciples in the upper room did.

And they ended up setting the world ablaze.