A few years ago I got an unexpected e-mail from a guy in Virginia who was studying to become a deacon in the Diocese of Richmond. His name was Joe Marotta.  Joe had discovered my blog and wanted to ask me some advice about his formation.  One e-mail led to another, and in time we ended up forming a long distance e-mail friendship. Over the years, I learned about his family – his wife Katie and his four small kids, including a set of triplets – his struggles with his job, his ministry, his studies.  He was very young, just in his mid-30s, and it seemed he had a lot on his plate. 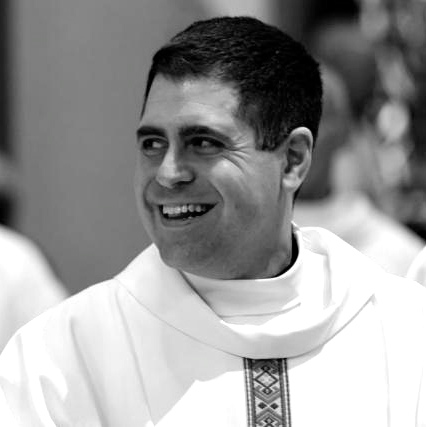 But something that came through again and again was his deep joy.He had a real enthusiasm for the vocation that impressed me and inspired me.  Somehow, Joe was able to juggle parenting, his job as a controller at a small college, parish work, and his studies.  In the middle of it all, he got another surprise: another baby.  Last September, his wife gave birth to their fifth child, William.  In October, when Joe was ordained, William was with him—literally. I’ll never forget the picture of Joe in his alb, processing down the aisle for his ordination, with his wife Katie by his side and his three -week-old infant in his arms. I’m not sure, but it may be the first time a baby has ever been part of an ordination procession.

After his ordination, Joe shared with me the milestones of his life as a deacon – his first homilies, his first baptism, wedding intakes and on and on.  The grace of the sacrament never ceased to amaze him. He was excited at being able to chant the Exsultet at the Easter Vigil, but embarrassed that he forgot to learn the “Alleluia” for the dismissal.

Well, he wrote to me, there’s always next year.

Last week, as he liked to do, Joe went with his family to the Outer Banks, to Duck, North Carolina, for vacation. Wednesday afternoon, while swimming, he was overcome by the waves. Rescue workers pulled him from the water, performed CPR. It was too late.  Deacon Joe Marotta had drowned. He was 39. He leaves behind his wife Katie and their five children: Caroline, Christopher, Jack, Michael, and little William.

Theologians and philosophers have been struggling for centuries to explain the mystery of grief, the reason for suffering and loss. I’ll be honest with you: I’m not up to the task. I can’t explain it. Stories like Joe’s fill me with sorrow. There are so many questions that can’t be answered, reasons we can’t understand.  The best answer, the only answer, to my mind is prayer.

But our gospel today reminds us: we do not pray alone. God is with us. He’s not detached or indifferent.  As the great Presbyterian preacher Timothy Keller has noted: God knows what it is to lose a child.  And Jesus himself knew grief, weeping at the loss of Lazarus.  So it is understandable that Jesus, moved with compassion by the sight of the widow at Nain, tells her, “Do not weep.”  He then gives her something beyond imagining, and beyond measure: he brings her son back to life.

Perhaps when Jesus saw this widow grieving for her son, he saw something else: his own mother. Perhaps he knew very well the sorrow that would pierce Mary’s heart, and was compelled to ease the loss for this particular mother.

But I think there was something more at work here, too.  Jesus saw a chance to offer this blessed reassurance: our last earthly breath isn’t the end of the story. There is more.

We may think it is over. But it isn’t.

That is our abiding hope—and this gospel, a beautiful illustration of Christ’s overflowing compassion, offers us the greatest consolation, the promise of a life yet to come. “Do not weep,” he told the widow. This loss isn’t permanent. There is resurrection.

Christ’s story didn’t end in the tomb. Neither does ours.

As we prepare to receive Christ in the Eucharist today, let us pray for all who are feeling overwhelmed by some sadness in their life, that they may feel in a special way God’s nearness and know his consoling love.

And let this be our assurance: what happened near the gate in the city of Nain wasn’t an isolated incident.  It happens here and now, with each of us.  With every one of us, in one way or another, God meets us on our journey, in the middle of our pain, and leaves us changed.

His nearness to us helps lift every burden from our shoulders.

As he did with the widow in Nain, he gives back to us what we thought we had lost—restoring hope and offering us life.