Today’s gospel poses this intriguing challenge: What would happen if we met Jesus in the middle of an ordinary day?   How would we react?

Well, consider the story of a young Japanese woman named Satoko Kitahara.  Last week the new Archbishop of Los Angeles, Jose Gomez, used one of his homilies to tell her story. I think she has much to say to us today. 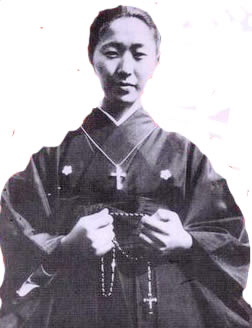 Satoko was a wealthy young woman who lived in Tokyo in the years after World War II.  She was well-educated, spoke several languages, played the piano and was trained as a pharmacologist.   But she lived in a city in ruins.  Some of the poorest people Tokyo, mostly widows and orphans, lived near the river in a place that came to be called “Ant Town,” because the people were considered as insignificant as insects.

In 1949, while walking through the city, Satoko decided, out of curiosity, to follow a group of nuns into a Catholic church – and was transfixed by what she saw.   Something touched her very deeply, and spoke to her heart.  She was especially moved by a statue of the Blessed Mother, and asked one of the nuns who she was.  She kept going back to the church and, several months later, at the age of 20, Satoko — a Shinto Buddhist — asked to be baptized.

After that, everything changed.  Her world view was altered.  A life of wealth and comfort became less important.  She began to feel great sympathy for the poor.

One day, a missionary took her to Ant Town — and Satoko was stunned.  She lived less than a mile away, but had never seen that kind of poverty.  She began spending more time with the people, even helping them pick out rags and junk to sell.            Eventually, she decided that she had to leave her family’s comfortable home and live among the poor.  She said: “To save us, God sent his only Son to be one of us.  He became one of us.  It hit me,” she explained, “that there was only one way to help these rag-picker children.  And it was to become a rag picker like them.”

She worked tirelessly for Japan’s suffering children – and eventually began to suffer herself.  She once said, “Because Christ gave his life for me, if he wishes me to give my life for Ant Town, I would do so.”  And so she did. She died of tuberculosis, at the age of 28.

Many are now praying that Satoko Kitahara will be beatified and one day become a saint.  Certainly, the suffering people of Japan need an advocate, now more than ever.

But on this particular Sunday, I think her story echoes in a profoundly beautiful way the one in this gospel, about Jesus and the Samaritan woman at the well.   And it brings me back to the question I posed at the beginning – what if you met Jesus in the middle of an ordinary day?

How would we react?

Would any of us even realize it?

The fact is: an encounter with Christ can change everything.   It happened with Satoko Kitahara; it happened, too, with this woman at the well.

Reading over this gospel, I was struck by something else, too: like last weekend’s gospel about the Transfiguration, this passage also offers us a foreshadowing of a world to come.  It’s another glimpse of Easter morning.

On Easter, Mary Magdalene, saw Christ and could not keep it to herself.  She needed to tell the others what she had seen and experienced.

So it is here, with another woman, the Samaritan woman, who meets Christ, and needs to spread the word.  And there’s an interesting detail: she does it the same way the apostles did. They left behind their fishing nets to follow him. This gospel tells us she left behind her water jar – and went in to the town and told people, “Come and see…could this man possibly be the Christ?”

Her life was changed.  She became, in effect, an apostle, a missionary, drawing others to the Messiah – drawing them, also, to the place where she experienced her own conversion, the well. A source for water became a source for new life – as meaningful as any baptismal font.

This is the story of conversion.  We cannot help but be different because we have met Christ.  Our world and our world view change – just as with Satoko Kitahara, with Mary Magdalene, with the woman at the well.

And it doesn’t necessarily happen in extraordinary ways or dramatic places.  Christ meets us where we are – in the dusty crossroads of a busy village, or amid the rags and trash cans of a modern slum.   It might be on the F train, or the Q60 bus, or in line at Key Food.  Do we see him?  Do we hear him?  Are we willing to be changed by him?

Are we willing to let him come into our lives and change everything?

Friday, we celebrated the feast of the Annunciation.  That morning, a priest came by my cubicle at work and cheerfully said, “Happy Feast Day!”  He explained that this is everyone’s feast day, because we are all called to proclaim the Good News, to act as heralds of the gospel, just like Gabriel.

It occurs to me, it’s a perfect way of looking at the story of the Samaritan woman.

She also engaged in her own kind of annunciation – bringing the Good News to others, and bringing people to Christ.

This Lent, let her story become ours.

Let us be open to meeting Christ.

And – when we do – let us pray to respond as she did…as Mary Magdalene did…as Satoko Kithara did.

Let us bear witness to what we have experienced with our lives, so that those who encounter us…will ultimately encounter him.