With all the attention focused on the royal wedding the last few days, it would be easy to overlook another global event this weekend: the beatification of Pope John Paul.

I wanted to spend a little time this morning talking about him – and, in particular, about a key part of his life that I think relates to this Sunday’s gospel.

Shortly after Karol Wojtyla was elected, a journalist asked someone in Rome what he thought of this new pope — the first in over 400 years who was not Italian.

And the observer responded: “Well, they didn’t elect a man from Rome. Instead, they elected a man from Galilee.”

To me, that now sounds prophetic, and for one simple reason: this man from Poland, the vicar of Christ on earth, so often lived his life in imitation of Christ.

To begin with, like the resurrected Christ, he made these words his first message to the world: “Do not be afraid.”  And he lived his own life as a fearless example of that.  He had been a laborer, an outdoorsman, a writer and poet.  But then he became something else: a seminarian, studying for the priesthood in a country where doing that could cost you your life.   When he told the world, “Do not be afraid,” he spoke with the authentic voice of a man who knew what that meant, who knew what it was to put his life on the line again and again, and who put everything in the hands of God.

That, too, was in imitation of Christ.

We see that again and again.  There was the forgiveness he offered to the man who tried to assassinate him – an act of mercy that made headlines around the world and echoed Christ’s own forgiveness of those who put him to death.  Small wonder that John Paul is being beatified today, on the feast dedicated to Divine Mercy, a feast connected intimately, too, with a beloved saint of Poland, St. Faustina.

Furthermore, like Christ, John Paul took the gospel to anyone and everyone.  While Jesus went searching for disciples on the seashore of his homeland, Pope John Paul went to more distant shores, traveling more than a million miles to 149 countries.  It’s not an exaggeration to call his papacy epic – it’s one reason why many call him today John Paul the Great.  I was struck by this simple fact:  John Paul’s 27-year papacy was almost as long as Christ’s entire earthly life.

But it was in the pope’s final years, I think, that his imitation of Christ was most profound – and, for our time, most meaningful.

John Paul was a vigorous and active 58 when he became pope.  But across two decades, his health began to fail, and the world watched as he grew weaker and weaker.  In time, slowed by disease, his steps became halting and difficult.  Finally, he couldn’t walk at all. The last weeks of his life he couldn’t even speak.  Cameras caught him struggling to offer a blessing from his balcony.  This man whose speeches had inspired millions, and whose homilies had hastened the fall of communism, couldn’t utter a word.

Most public figures would try to hide that part of their lives. 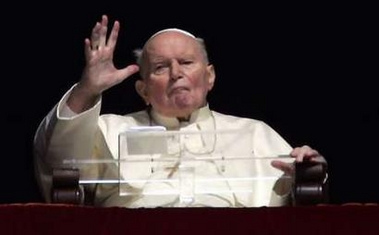 In today’s gospel, the resurrected Jesus appeared to his disciples and showed them his wounds.  He said, in effect, I am one of you.  I have known what it is to suffer, and bleed, and die.  I have felt what it is to be human.  I bear the scars.

In the same way, Pope John Paul showed us his weakness.  His humanity.  His challenges.  His failings.   He bore witness to the struggles we all have against pain and hardship, against sickness and death.

In the ultimate imitation of Christ, he showed us his wounds.

In a time when so many in our culture see human life as dispensable – when the small, the weak, the frail are considered disposable – John Paul’s long goodbye stands as a powerful testament.  It says: “All life has meaning.  Even when it is weak. Especially, when it is weak.”

And it repeated his continuing theme: do not be afraid.

Do not be afraid of suffering, or of illness.

And: do not be afraid of death.

The other day, Peggy Noonan wrote a piece in the Wall Street Journal and reflected on one galvanizing moment in John Paul’s life, his first visit to Poland in 1979.  She recalled his sermon, when he wondered: why had God lifted a Pole to the papacy?  And John Paul answered his own question: Perhaps because Poland is “the land of a particularly responsible witness,” a witness to many of the sufferings of our age.

That, I think, became John Paul’s witness, too.

To a lot of people, he will be remembered as our pilgrim pope, the man who traveled the world to build bridges, reaching out to those in Africa, Asia, India and the Americas, trying to craft a New Evangelization, using all the modern tools at his disposal.  He touched hundreds of millions by his presence, by his courage, by his compassion.  His powerful writings on sexuality and human dignity will be studied for generations.  Certainly, scholars and historians will be debating his legacy — both positive and negative — for generations.

But, on this particular Sunday, let’s also remember something else.

Again and again, this pope lived a life in imitation of Christ.

Even to the end.

He didn’t flinch from reminding the world that all life has dignity and sanctity.   And he did it by showing the world his wounds.

It’s one reason — among many — why today we call this extraordinary man… “blessed.”

And it’s why we might also look to his life as an example, praying that it may bring us to a closer imitation of Christ in our own lives – on all our journeys, through all our hardships, all our sufferings.

Blessed John Paul, pray for us.