The scriptures this week introduce us to someone we don’t hear about very much—but he is critically important to Christianity and, I think, to the times in which we live.

The reading from Acts describes how he, in effect, took Paul under his wing—in part to protect him from frightened Christians, but also to act as his mentor and guide.

A little background: Barnabas was born into a wealthy Jewish family.  At some point, perhaps moved by hearing Christ preach, he sold his estate and gave up his wealth and became a disciple.  Later, after Paul arrived on the scene, it was Barnabas who introduced him to Peter.  Some scholars think Barnabas and Paul had known each other when they were younger and had studied together under the same rabbi.

For several years, Barnabas and Paul worked together as missionaries.  He was a prolific evangelist, and some scholars believe it was Barnabas who wrote the Letter to the Hebrews—the only epistle not attributed to a particular author. Paul and Barnabas eventually had a falling out over Barnabas’s cousin Mark – the same Mark who wrote the gospel—because Paul had doubts about Mark’s dedication to the faith.

But by one account, when Barnabas was finally martyred, around the year 61, it was Paul who helped to bury him. Christian love bridged any differences they may have had.

Tellingly, Barnabas is not the name he was born with.  His given name was Joseph.  But just as Saul became Paul, Joseph received a new name when he became a Christian. Barnabas means “Son of Encouragement.”  Encouragement is what he gave to the growing community of Christians – and it surely describes what he offered to Paul, as well.

So great was his influence, in fact, that one commentator has even remarked that there would not have been a Paul without Barnabas.

Today, he is the patron saint of Cyprus, where he grew up. But there is another role he fulfills: as a result of the way he introduced Paul to the Christians—and managed to foster mutual respect when there was a lot of suspicion and mistrust—Barnabas is also the patron saint of peacemakers.

Can anyone deny that we need his intercession now more than ever? 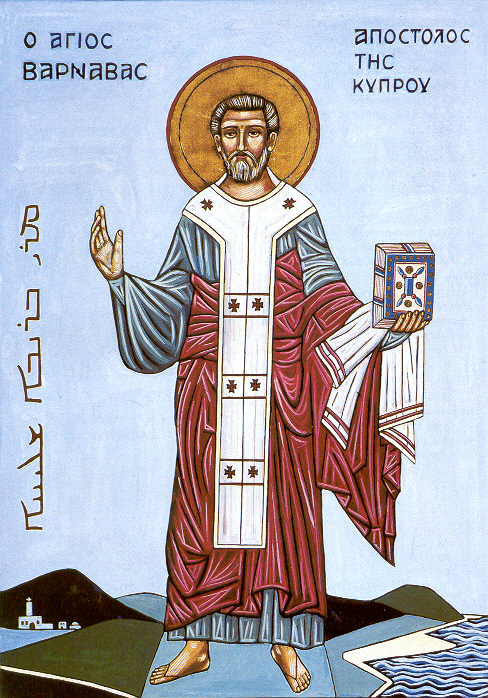 In the passage from John’s gospel we just heard, Christ exhorts us to remain in him, like branches of a vine, and to bear good fruit.

And today’s letter, also from John, makes the message even more explicit: “Love one another, just as he commanded us.”

But in too many places today, that command is forgotten, or abandoned, or even mocked.

Our world is scarred by cities that are now synonymous with conflict and bloodshed and hate.

We live in a world hungry for peacekeepers—but they are far too few. Add to these the wars that are happening in other places too: in our families, in marriages, in politics. The landmines are everywhere—and so is the division and the pain.

We need “sons and daughters of encouragement.” We need to pray for more Barnabases to rise up and remind us what too many have forgotten:

And it is love, after all, that is our call as Christians. In three simple words:

Let that be our hope and our prayer during these anxious days.  And let this, also be our prayer:

– That St. Barnabas might intercede on our behalf, to bless the world with new peacemakers.

– That Barnabas—the one who built bridges between those who were persecuted, and the one who persecuted them—might help build bridges in our own world, in our own time, to foster acceptance and peace.

– That each of us might feel the encouragement of the Son of Encouragement, and be missionaries of Christian love to those around us.

To paraphrase a prayer attributed to another great saint of peace:

Where there is mistrust, let us bring trust.

Where there is hatred, let us bring healing.

Where there is rage, let us bring calm.

Where there is injustice, let us bring justice.

Where there is doubt, let us bring faith.

We need to be instruments of peace.

In a few moments, we will come forward to receive Christ in the Eucharist. This Sunday, let us ask him to remain in us, as we remain in him. And let us carry that fruitful hope with us as we leave this place and head into the world.

Let us work to bring Christ to others—in our lives, in our words.

Let us be missionaries to world that has forgotten what it means to love.