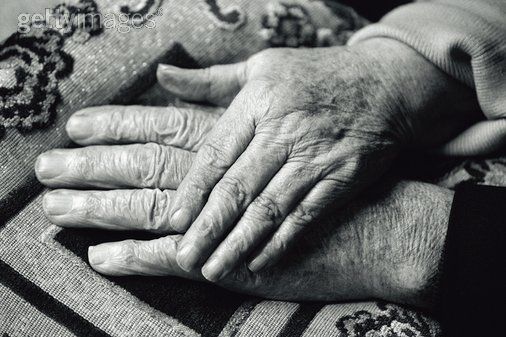 To hear audio of this homily, click the green arrow below.

This past week, I had a chance to preside at a wedding here at the parish.  As many couples do, the bride and groom selected for one of their readings the famous letter from St. Paul to the Corinthians on love.  “Love is patient, love is kind, love never fails…”  Usually, a couple will ask one of their young friends to do the reading.  So I was a surprised to see the person this couple selected: the groom’s 80-year-old grandmother.

During the wedding, when the time came for her to read, she had to be helped up the stairs and into the pulpit.  I worried whether she’d even be able to read the text.  But when she opened her mouth and began to read that passage, it was a revelation.  It was as if we were all hearing it for the first time.  It was beautiful and bold, heartfelt and deeply moving.  This woman brought 80 years of lived experience to that passage. We were hearing her life – and, I think, it was a kind of gift to the bride and groom, and to all of us.  A gift of wisdom, and gentleness, and truth.

It made me realize that what St. Paul was speaking about was more than just pretty words to be read in Corinth and then, 2,000 years later, to be repeated at countless weddings.  No.  It was also his lived experience of Christian love.

And I think it was formed, in part, by what we heard today in the reading from the Acts of the Apostles.

At this moment, Paul – still known as Saul — was a fresh convert to the faith, newly arrived from Damascus. As the account makes clear, many Christians were afraid of him.  They knew his reputation – a persecutor, a Christian-hunter.  It’s fair to say that, among the Christians in Jerusalem Paul probably wasn’t the most popular kid at the lunch table.  Understandably, nobody trusted him.
But one person saw something more.

That person was Barnabas.

Barnabas believed Paul’s conversion – and believed in him.   Today’s reading says he “took charge” of Paul.   But scholars think it was more than that. One commentator has suggested that there would not be a Paul if there wasn’t first a Barnabas – a mentor and guide, but also a figure who must have had great courage, patience, and perseverance.

In other words: someone who personified Christian love.

Years later, when Paul wrote to the Corinthians about love – how it bears all things, hopes all things, and never fails – this, I believe, is what he meant.  Not something romantic or flowery.  But something that is a gift of self, that demands sacrifice and faith. It is unafraid.  Steadfast.  Willing to risk.  Willing, even, to see beyond someone’s past.

In other words: a love willing to “believe all things” – even to believe that a lowly tentmaker from Tarsus, a man who was a sinner and persecutor, might have the potential to be a saint.

How many of us are able to love that way?

How many of us today would dare to be a Barnabas?

So often, we live in fear of what we do not know – suspicious of “the other,” someone we may not understand, or agree with, or even like. You don’t have to look far for examples.  We see it today in politics, on talk TV, and even within our own church.  We live in a world divided, polarized, in constant conflict.  We let our fear and mistrust get the best of us, often all too eager to believe the worst about someone.

In the first letter of St. John that we heard this morning, the “beloved disciple” wrote: “Those who keep God’s commandments remain in him,” he wrote. “His commandment is this…love one another…”

Of all the commandments engraved in our hearts, that may be the one we Christians most routinely and most frequently break.
Yet it is also the one that binds us most closely to Christ – as Jesus put it in the gospel, like branches connected to a vine.

St. John understood that.  So did St. Paul and St. Barnabas.  Do we? 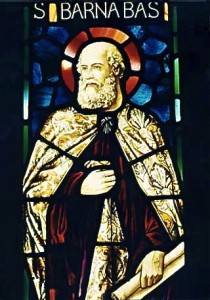 Preparing this Sunday’s homily, I was curious to find out more about Barnabas.  He was born into a wealthy Jewish family.  At some point, perhaps moved by hearing Christ preach, he sold his estate and became a disciple.  Later, after Paul arrived on the scene, it was Barnabas who introduced him to Peter.  Some scholars think Barnabas and Paul had known each other when they were younger and had studied together under the same rabbi.

For several years, Barnabas and Paul worked together as missionaries.  But they eventually had a falling out over Barnabas’s cousin Mark – the same Mark who wrote the gospel – because Paul had doubts about Mark’s dedication to the faith.  But by one account, when Barnabas was finally martyred, around the year 61, it was Paul who helped to bury him – perhaps because, as he had earlier written to the Corinthians, “love never fails.”

Tellingly, Barnabas is not the name he was born with.  His given name was Joseph.  But just as Saul became Paul, he, too, was given a new name by the Christians.  Barnabas, in fact, means “Son of Encouragement.”  Encouragement is what he gave to the growing community of Christians – and it surely describes what he offered to Paul, as well.

To offer encouragement means to support, to uplift.  It is taking time to give of self – to give a hand to hold, a shoulder for support, an ear to listen, a voice to calm all doubts and erase all fears.

It is, quite simply, a kind of love.

Let us pray to be Barnabas to one another.