The writer Amy Welborn lives in Alabama, near Birmingham, and she spent part of this past week volunteering at a call center, helping people whose lives had been turned upside down, literally, by the tornadoes that tore through the region.  She wrote about her experience on her blog, and described what people were doing for one another.

A woman called from Florida. “I’ve got a group and we want to come up this weekend – where can we go to help?”

A fellow called from Mobile, saying he had two friends from Michigan who were going to come down for a week on their vacation time. Where could they be best used?

A woman said she was a nurse and had just gotten off work and “I have a strong back and I can lift heavy loads – can I go somewhere this afternoon?”

And it went on and on.  As Amy described it:

“Any time you go to a store here in Birmingham these days, here’s what you see: people pushing carts full of water bottles, packs of underwear and socks, and packs of soup, stew and fruit, boxes of batteries. They’ll load them up, go drop them off at a church or some other center, and many of them will return tomorrow, ready to buy some more.”

I read that and was deeply moved.  It says something about human nature.  But it also describes something powerful, something that is at the heart of our lives as Christians.  In fact, it’s at the heart of this Sunday’s gospel, and all the gospels we’re hearing in these weeks after Easter. 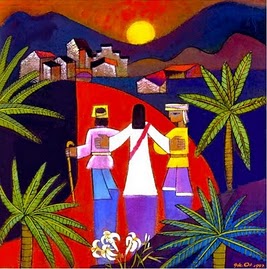 Look at the scriptures from Easter onward.  Christ didn’t appear to his followers one by one.  The encounters with the resurrected Jesus all happened in groups: the two women at the tomb; the many disciples gathered in the upper room; and now, two disciples traveling on the road to Emmaus.   That meeting leads not only to communion – the breaking of the bread – but to a deepening desire, a need, to spread the news to the community of believers.  The disciples who met Christ couldn’t continue on their way, they couldn’t just pick up where they left off on the path they’d been following.  They had to go back and tell others.

As I mentioned at Easter, so much of the resurrection story is about telling that story – spreading the word.  And we see it here once again.  It’s a story that cannot be contained.  The good news has to be shared.

And it has to be that way.

Our life as Catholic Christians is not only about communion.

Too often, people forget that.  We saw that at Easter: hundreds of people crowded the church for all the masses.  It was Standing Room Only.  Where are they the rest of the year?

Some will tell you – and this is a common refrain – “I don’t need to go to church to pray.  I can pray at home on my own.”

True enough.  But there is so much more to being a Christian.

To miss this weekly celebration is to miss something fundamental to the faith: a  sense of being part of something greater than yourself, of being part of the Body of Christ.  It’s to miss the shared experience of God’s grace, that same experience that compelled the men at Emmaus to run back to Jerusalem and tell others what they had encountered.

This isn’t something meant to be kept to ourselves.  It’s meant to be lived, practiced, prayed with others.   What we have here is an extraordinary gift.  And it’s not something we should take for granted.

The Church understands that, and it’s one reason why her timeless teaching hasn’t changed: it’s still a grave sin to intentionally choose not to go to Mass.   But part of the reason for that is because of what happens here.  Around this table, we encounter Christ in the breaking of the bread – just like the men on the way to Emmaus.  To reject that, to walk away from it, is to reject The One who is at the center of our celebration.

It is to reject Jesus.

Obviously, I’m preaching to the choir this morning.  The people who need to hear this aren’t the people who are already here.  But you probably know some of those who aren’t here.

When we leave here this morning, we need to be like the disciples who met Christ on that road. We shouldn’t just walk out the door and continue on your journey like nothing happened.

Something is about to happen here.  Something transcendent, and transformative.  And when it is over, we need to go tell others.

We need to tell it not only with words, but with our lives.   We need to bring the Christ we have received out into the world.

We don’t know if those disciples ever reached Emmaus.  But we do know this much: their travels were interrupted and the direction of their journey was changed, because of an encounter with Christ.

In some way, that is every Christian’s story.

But it’s not one we should keep to ourselves.

It is meant to be shared.