Homily for November 25, 2012: Solemnity of Christ the King 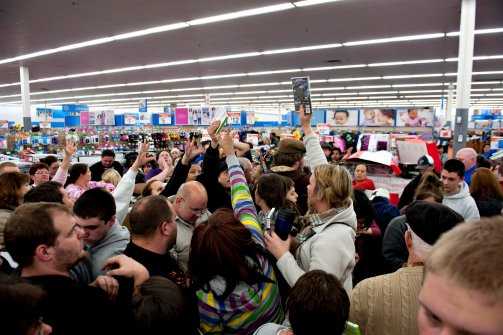 This Sunday, on the Solemnity of Christ the King, I was preparing to preach about how royalty is really alien to us Americans, how the concept of a King is something foreign to our sensibilities.

But an experience Friday proved me wrong.

I made the mistake of going to the mall with my wife on Friday. We were in Maryland, visiting family, and decided to stop by a nearby Sears. My wife had one thing she needed to pick up. I won’t lie to you; it was underwear. Gentlemen, if you are single and wondering what married life is like, that’s it: Marriage is going to Sears to buy underwear the day after Thanksgiving.  Anyway, she found what she was looking for and then got in line.  There must have been at least 30 people ahead of her. When people talk about online shopping, I don’t think this is what they meant by “on line.”

But while we were standing there, I was amazed.  I usually avoid the stores on Black Friday, so this was a revelation. I saw people absolutely swamped with purchases. Coats, scarves, boots, shoes, gardening tools, toys.  Boxes and bags of every description.  Only in America could people give thanks on Thursday for all they have, and then on Friday go out and stand in line to buy more. And this was one line, in one store, in one mall.

The scene was being repeated all over the country—sometimes with shocking consequences. You hear it about it every year, and this year was no different.

In Tallahassee on Friday, two people were shot at a mall while fighting over a parking space. In Kansas City, shoppers at a Victoria’s Secret stormed the store when it opened after midnight on Friday.  In Michigan, security guards had to use pepper spray on some shoppers at one mall. In a Georgia Wal-Mart, shoppers caused a riot when they stampeded over each other to get to the smartphones.

Standing there in Sears Friday afternoon, I realized: we do have a king. In fact, we have many kings.

So very often, in so many places, we are ruled by what we want.

Of course, it’s not always just material things that rule over us. Sometimes, we find ourselves subjects of other Kings, other princes. We can find ourselves citizens of a world overseen by Pleasure, or Pride. We might live in a borderless principality where the ruling figurehead is Insecurity, or Bitterness, or Jealousy.

Many of us discover, sometimes too late in life, that the peaceable kingdom we inhabit is in fact a dictatorship, ruled by our own weaknesses.

But this Sunday, the Church says: take another look.  It asks us to look at the world differently.  We are asked to reconsider who or what rules our lives – and honor the only King that matters, Jesus Christ.

He is a King so great that he stood before a Roman governor in shackles, wearing a crown of thorns. Yet, in that posture of a prisoner, he was victorious.

He is a King so great that he offers himself to us this day, at every Eucharist, in simply a sliver of bread. But in that bread, something no bigger than a coin, lives all the hope of the world.

That is our King. Fully present, here and now.

But do we even recognize him?  Pilate asked Jesus if he was a King. Maybe we need to ask: is Jesus our King?  Or are there others?

I mentioned a few earlier. It’s worth asking: who, or what, rules our life?  Who, or what, holds power over our daily choices? It might be a career. Or a debt.  Or desires.  Or friendships.

It might be something as small as the smartphone in your pocketbook, as fleeting as the sale at the mall.

Let me make a suggestion.  Next week, we begin Advent. It is is a time for cleaning up–for clearing the way, for preparation.  “Prepare the Way of the Lord,” the Baptist will cry out.  Well, begin now.  Overthrow whatever King is keeping you from Christ. Stage a revolution.

Plot a coup for Christ.

Turn away from the royalty that demands our constant attention and obedience and subservience.  Turn, instead, toward the King who is our savior and our hope, our liberator and our advocate.  The King who comes into our world in unexpected, quiet ways—in a manger, on a donkey, through a crumb of bread. The King who conquers with an armed force no one can resist.

He conquers, quite simply, with love.

In the gospel, Jesus told Pilate: “Everyone who belongs to the truth listens to my voice.”  Now is the time for us to listen.  And to truly hear.  Christ’s voice calls us to something more enduring than a 60” plasma TV, more thrilling than an iPad or a Samsung Galaxy Tablet. It calls to something that will last long after the plastic evergreen strands have been folded up and put back in their boxes and the shopping mall Santa has returned to the North Pole.

It calls us to conversion.  To renewal.  To simplicity.  To faith.  It calls us to a kind of regime change that is truly a coup for Christ.

We’re summoned to stage a coup for Christ.

Let that be our mission this Advent: to be footsoldiers for the Lord, living purely for him.  Our lives are crowded with too many other Kings.  Let’s return to the only one who matters. And let us make his kingdom manifest the way that he taught us, carrying in our hearts the great words of his great prayer:

Thy kingdom come…thy will be done.