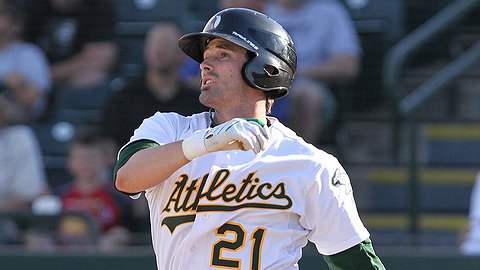 This episode in the gospels could go down as one of the great “unsolved mysteries” of the New Testament. We never hear what happened to the rich young man, never find out what he did, never hear the rest of the story.  We tend to assume that he was simply too attached to his belongings to give them up, and was never heard from again.

But I think that dismisses him too easily. If the gospels teach us nothing else, it is this: an encounter with Christ changes people. The blind see, the paralyzed walk. It’s entirely possible that this rich young man—in a sense, living with a different kind of blindness and paralysis—was also changed.

I think Mark leaves this story open-ended as a way of telling us that our lives, too, are open-ended. We have choices.  What will we choose?

For the rich, Jesus said, the choice is especially hard.

But all things are possible with God. Consider, for example, the story of Brother Matthew Desme.

If you find yourself in southern California, you might drive about 20 miles south of Los Angeles, to St. Michael’s Abbey, in Silverado, California. It is run by the Norbertine order. There you will find a number of young men in white robes doing the ordinary work that the Norbertines do. They get up at five every morning to pray. They chant the Mass.  They dig trenches, mop, mow lawns. They observe “the Great Silence,”not speaking for hours at a time.  And at the end of the day, they retire to small rooms with a single bed, nightstand and sink. They own nothing.

One of them is 26-year-old Brother Matthew – tall and slender, with close-cropped hair and glasses. He’s been a novice at the abbey for two years.  He doesn’t look any different from the other men in white robes who walk the grounds and work the land. He’s the sort of person you might not even notice. And that’s the way he likes it.

He likes it because just three years ago, everyone noticed him.

Three years ago, his name then was Grant Desme. He wasn’t a monk. In 2009, Grant Desme was one of the hottest rising stars in American baseball — a center-fielder playing for a farm team for the Oakland A’s.  During the minor league season in 2009, he hit 31 home runs. In November of 2009, he was voted the league’s Most Valuable Player.  When the opportunity came, he was drafted by the Oakland A’s in the second round and signed for a salary of $430,000 a year.  He was looking at a future a lot of young men dream about, where people would see him on cereal boxes and line up to have him sign bats and caps.

But just two months after signing that contract, Grant Desme announced he was quitting.  People were stunned.  Since the age of four, all he’d ever wanted was to play baseball.  But he realized that he wanted something else more.

He wanted to be a priest.

In the fall of 2010, he entered St. Michael’s Abbey in Silverado. The man who seemed destined to be a household name changed his name.  Or rather, he had his name changed for him.

He was given the name of Matthew.  He asked his superior why. “He said it was because Matthew was a rich tax collector,” Brother Matthew explained recently. “And I was a rich baseball player.”

“I had everything I wanted,” he said. “And it wasn’t enough.”

One of his teammates put it this way: “His love for God took over his love for baseball.”

People who know more about this than I do will tell you that what Grant Desme did is unheard of. Players with his kind of talent just don’t do what he did. They just don’t. It’s unthinkable – or impossible.

But what did Jesus say in the gospel?

“For human beings it is impossible, but not for God. All things are possible for God.”

That’s one reason I think the rich young man in the gospel didn’t do what you might expect. Maybe it didn’t happen overnight. Maybe it took a lifetime. But I think he must have understood, as Grant Desme did, that he had all he wanted…but it wasn’t enough. An encounter with Christ changes everything.

While the gospel is about having, and owning, and possessing – about the things that clutter up our lives and get in the way of our salvation — I think there is another message here, too.

Not all of us are burdened with wealth —and isn’t that a burden we’d all like to have? —but there can be other things that get in the way of following Christ.  Other things we possess.  Maybe it’s a fear of change, an inability to trust or to love.  Maybe it’s a stubborn attachment to a particular sin. Maybe it’s something rooted in fear, or insecurity, or our own resistance to change.

How hard it is for us sometimes to give up those things, to let them go.

So often, the things we possess aren’t things at all.

And often, we don’t possess them.  They possess us.

This gospel asks us to let go of what we don’t need, those “possessions” that keep us from following Christ completely.

Will we do it?

Are we courageous enough to try?

And today, as Brother Matthew, he will tell you: “All things are possible for God.”

Our restless hearts will find rest if we put our trust where it belongs—not in things, but in the Creator of all things.

The Holy Father has just begun a Year of Faith.  This gospel  can serve as a timely reminder that faith is rooted not in what we see, or own, or have, but in something deeper. It takes trust.  It demands a kind of courage.  The rich young man was asked to take a leap of faith. So was Grant Desme. So are all of us.

But the rewards are incalculable. A life of faith, a life of surrender and sacrifice, can lead us to the place all of us seek—the place that every baseball player knows is the ultimate goal.

It can truly bring us home.