This past Wednesday, the world lost a giant.

But I don’t mean Steve Jobs.

In all the news coverage given to his passing, all the accolades about his life, much of the media overlooked another life that didn’t get as much attention. But I want to give it that attention this morning.

No, he was not a household name. Unlike Steve Jobs, he was not a billionaire who graced the covers of magazines or captured the imagination of millions with his creative ideas.

But like Steve Jobs, he was also born to a single mother.

And, like Steve Jobs, what he did changed the world.

Fred Shuttlesworth was born in Mugler, Alabama in 1922. After finishing high school, he got married and got a job driving a truck for $1.80 an hour. He eventually began attending the Corinthian Baptist Church in Mobile, where he got a license to preach. He soon moved to Birmingham, just as the Civil Rights movement was beginning.

He took part in boycotts, encouraged his congregation to register to vote, and became founder of the Alabama Christian Movement for Human Rights. In 1957, along with Dr. Martin Luther King Jr., he founded the Southern Christian Leadership Conference. He became a powerhouse in the Civil Rights movement.

And, he lived every day in the shadow of death.

Twice, he was the target of bombings. Two dozen times, he was thrown in Birmingham jail. When he tried to enroll his daughters in a segregated school, he was attacked by a mob armed with chains and baseball bats. His wife was stabbed. His daughter had her ankle crushed. During one protest, a powerful torrent of water from fire hoses smashed him against a wall, seriously injuring him. After one attack, doctors were amazed that he didn’t suffer a concussion. He said, “The Lord knew I live in a hard town, so he gave me a hard head.”

For decades, Fred Shuttlesworth was knocked down, but got up; he was beaten, but unbowed; he was targeted for death, but never tried to hide from life.

A price was put on his head – the KKK offered $10,000 for his death – but he stood firm and stood proud. He stood up for equality, and for justice, and for the dignity of the human person. 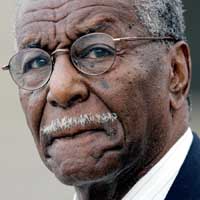 Put simply: Fred Shuttlesworth stood. And he stood for something.

Friday, Diane McWhorter, who wrote a book about Rev. Shuttlesworth, said in the New York Times: “His legacy reminds us of the not-so-distant era when the task of our heroes was to persuade society to regard as human a class of people who had long been treated as things.”

I read that and I can’t help but think of the great human rights battle of our own time: abortion.

And I’m reminded of the clarion words that another hero, Paul of Tarses, wrote to his own beleaguered followers two thousand years ago, words that call out to us in today’s scripture:

“I can do all things in him who strengthens me.”

Fred Shuttlesworth knew those words intimately. He lived them. He was ready to die because of them.

I can do all things in him who strengthens me.

If Fred Shuttlesworth could “do all things” – and he did — imagine what we can do. We aren’t all called to march in the streets or spend time in jail or stand up to the thundering force of water from fire hoses.

But we are called to do something just as courageous and just as radical.

We are called to love.

Think of how Christ can strengthen each of us. He gives us the grace to hope when we’d rather despair…to love when it’s easier to hate…to forgive when we’d rather be vengeful. He nourishes us with his own body and blood, to make himself a part of us, and make us a part of him.

And from that, we can do all things in him who strengthens us. What seemed impossible becomes possible.

We can do something radical: we can be radicals for Christ.

The famous rock star – and Christian – Alice Cooper once said: “Drinking a beer is easy. Trashing a hotel room is easy. But being a Christian? That’s a tough call. That’s rebellion.”

An ad for Steve Jobs’ Apple computers once said: “Think different.” It was a take-off on the well-known motto of IBM, “Think.” But it was also a challenge. And a challenge, I believe, that Fred Shuttlesworth understood. He did “think different” – against the status quo, against a culture of discrimination, against a society that didn’t fully embrace the gospel message of justice and compassion and love.

And he was able to do it, and do all things, “in him who strengthens me.”

The message of his life, and the message of this Sunday’s scripture, tell us as much, and force us to confront the question:

What do we want to do with the strength that Christ has given us?

How much are be willing to be transformed by it?

Are we ready to be fully Christian, fully faithful, fully in love with the gospel?