Anyone who saw the 2002 Super Bowl saw something unforgettable.

And it had nothing to do with sports.

It was held in New Orleans, in the Super Dome.  The half time entertainment was Bono and U-2. There must have been 100-thousand people in the stadium, cheering wildly.  Bono stepped onto the stage and the lights dimmed and the crowd roared and the band began to play.

If you watch video of that performance, you can hear Bono, over the music and the cheering, speaking into his microphone: “Lord, open my lips that my mouth may sing forth your praise.”  The same words spoken at the beginning of the Liturgy of the Hours in the Catholic Church.

And in fact, what followed turned out to be a kind of prayer. 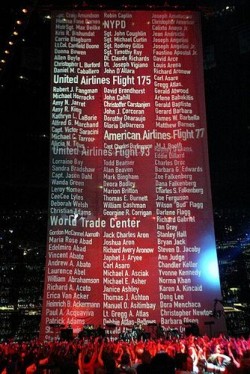 As the song began, and the music swelled, behind the stage a massive banner started to rise, coming up from the floor of the stage, rising toward the ceiling, hundreds of feet above. Around the world, I imagine, millions of viewers were transfixed – stunned and moved what they were witnessing.

On the banner were projected the names of all those who had died on 9/11, less than five months before.

And the music continued, and it went on, Bono and U2 singing about a place “where the streets have no name.” And the banner kept growing, and the list kept getting longer.  It seemed like it would never end.  Name after name after name, like a visual litany of the lost.

Then the banner reached the roof of the Superdome.  And it collapsed, rippling to the floor.  For a brief moment, we were back there, and it all was happening again.

To see it so clearly was devastating.

And at the end of the song, with the crowd on its feet, screaming wildly, Bono opened his jacket and there, inside, was sewn an American flag.  He stood there in defiance, and in pride, and in solidarity.

There have been so many other tributes and memorials and remembrances since that day – but nothing like that.  It was raw, and it was real.  An Irishman stood on a stage in New Orleans and paid tribute to a tragedy that struck New York and Pennsylvania and Washington and he said, in effect, I’m with you.  Inside, I’m one of you.  This is my tribute, my remembrance, my prayer.

It is difficult to capture what this anniversary means to us as Americans, as New Yorkers, as Catholic Christians.  The things we feel are almost beyond words.  We are still, in many ways, groping in the dark, struggling to find a way to deal with what happened, and how much our lives and our world have changed.  Yet, this day, as we come before the altar of God with our prayers and petitions, our grief and our anger, we hear these words from the ancient prophet:

“Forgive your neighbor’s injustice; then when you pray, your own sins will be forgiven. Think of the commandments, hate not your neighbor; remember the Most High’s covenant, and overlook faults.”

In the gospel, Jesus says it again:  “Forgive your brother,” he says, “from your heart.”

But how?  I wish I knew.  I wish there were a mystical way to click on a forgiveness switch in the human heart.  I wish I knew how to love all my enemies and pray for all my persecutors and “forgive my neighbor’s injustice” – even this most heinous injustice of all.

I think perhaps that forgiveness – like conversion – is a journey.  The human heart isn’t necessarily converted over night.  We don’t all have that electrifying moment on the road to Damascus.  For many of us, it grows out of what Flannery O’Connor called “a habit of being.”  It happens over a lifetime.

Conversion is a daily choice.  So, is love.

And so, I believe, is forgiveness.

Like all of the challenges of our faith, it is something we need to pray for – to pray to able to do what we are called to do.

To love our neighbor.

To love our enemies.

To forgive our neighbor’s injustice.

C.S. Lewis put it beautifully.  “To be a Christian,” he wrote, “is to forgive the inexcusable, because God has forgiven it in us.”

A couple weeks ago, we heard Christ tells his disciples: “Take up your cross and follow me.”

Well, one of the heaviest crosses is the call to forgive.   Even when something seems unforgivable. Especially then.  But by God’s grace – and by Christ’s example – somehow, we pick up that cross.  We bear it on our backs.  And we begin the long walk.

We may carry it on our backs, but what is more important is what we hold in our hearts, and it is this: that love is greater than hate; that hope is stronger than despair; that vengeance is no match for forgiveness.

This Sunday, we pray to remember that.  And we pray, very simply, in remembrance. 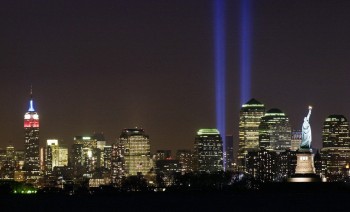 We remember: all the lives that were lost, the martyrs who were born, the heroes who did what no one thought possible.  We remember.

At the Super Bowl, the song that Bono performed was “Where the Streets Have No Name.”  Bono has said that he wrote the song about growing up in Dublin, where everyone could tell who was rich, and who wasn’t, by the street they lived on.  And the place he was singing about was a city where that wouldn’t matter anymore.

It was his vision of heaven:

I’ll show you a place

Where there is no sorrow or pain…

And the streets have no names…

Our prayer is that we may one day know that place and walk those streets, in gratitude and in joy, with those we remember this day.

Eternal rest grant unto them, O Lord, and let perpetual light shine upon them.

May their souls, and the souls of all the faithful departed, through the mercy of God rest in peace.