“From within people, from their hearts, come evil thoughts…”

What goes unmentioned is that a sinful heart can also be moved to change, sometimes in the most surprising ways. 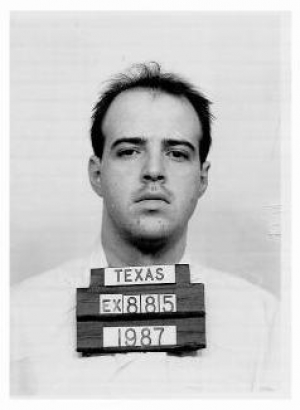 The other day, a friend of mine posted online the story of a remarkable conversion: the story of Jonathan Wayne Nobles.

In 1986, when he was 25 years old, drug addict Jonathan Wayne Nobles brutally attacked two women in Austin, Texas, stabbing them to death. He was arrested, and stood trial.  He never took the stand, and virtually the entire case rested on his confession. It was an open and shut case. He was found guilty and, according to Texas law, sentenced to death. He was sent to Huntsville Prison.

When he first arrived, he alienated almost everyone. He got into fights, broke away from the guards, physically harmed himself just to get out of his cell.  But one of the people who befriended him was the priest who ministered to the prisoners.  He encouraged Jon to attend Mass. So he did.  He went once.  And then again.  And then again.  And he kept going back. Something just clicked. After several months, Jon Nobles was baptized.  And his life after that changed.

Jon Nobles became known for his kindness, looking out for other inmates, ministering to them, quoting the scriptures. He developed a deep devotion to the rosary and the Eucharist. He learned about St. Catherine of Siena – who herself helped convert a convicted killer.  That led Jon Nobles in 1989 to become a lay Dominican. He served as  the godfather to another inmate, Cliff Bogges, and was there for his baptism.  He was also there to assist at Mass the night Cliff Bogges was executed.

As his own execution date approached, in an extraordinary move, he met and reconciled with the mother of one of his victims.  They talked for five hours. At the end she told him, “I feel compassion for you, Jonathan.” He replied, “I don’t know if I deserve it.”  “No you don’t,” she said.  “But you have it.”

A few hours before his death, he made his last confession. And in an unprecedented act, he made one simple request for his last meal: the Eucharist. He fasted all day before he received his last communion. He called it his spiritual food for his journey home.

Jonathan Wayne Nobles was executed by lethal injection on October 7, 1998, the feast of the Holy Rosary.  He was 37 years old. An hour after his death, a bishop celebrated a funeral Mass. Jon Nobles was laid out in the white habit of a lay Dominican. His journey was over.

And what a journey it was. It’s one of the most haunting and humbling conversion stories I’ve ever heard.

In the gospel, Christ challenged the Pharisees — and us—to a kind of conversion, to change the way we think, the way we live, the way we understand what God wants of us.  And the point is clear: it begins with the human heart.  That is where the worst aspects of human nature reside – but also the best.

The choice is ours. And it begins by opening ourselves to God’s Word.

In the letter from James, we hear: “Humbly welcome the word that has been planted in you and is able to save your souls. Be doers of the word and not hearers only…”

Sunday afternoon, I’ll be performing several baptisms here.  In the baptism rite, there is a prayer in which the priest or deacon blesses the ears and mouth of the baptized, saying: “The Lord God made the deaf hear and the dumb speak…May he soon touch your ears to receive his word, and your mouth to proclaim his faith.”

That is the message of St. James, woven into the very fabric of our initiation into the Church. This is part of our calling.  But how well do we answer it?

We hear God’s word, of course.  But do we actually then proclaim it?   Do we live it?

Do we actively seek to draw closer to God?

A lot of us are cradle Catholics. But I would suggest that every one of us is also a convert —making that daily choice to commit ourselves to Christ and to truly live the faith. Conversion is a lifelong process, a moment-to-moment assent of will. A surrender to God.

From all the evidence, I think someone who understood that was Jonathan Wayne Nobles.  His story reminds us that no one is beyond the reach of God.

Pray for him, and those like him.  And as we prepare to receive the Eucharist, that food for our journey, pray that our own hearts may be worthy, and may be ready, and that we may be able to make God’s word known to every one we meet.  Pray that we all may be doers, not just hearers.

By the grace of God, we could end up not only changing ourselves.

We could also change the world.