How can you help refugees from the Middle East?

Stories like that of young Aylan Kurdi have riveted the attention of the world on the plight of refugee families fleeing Syria, Turkey and the Middle East. But his story is the tragic tip of a large and overwhelming iceberg.

Recently, The Guardian put this crisis in perspective:

What does this emergency look like? Half of Syria’s population has been displaced since the popular protests began in March 2011. To put that in perspective, this equates to 160 million Americans fleeing their homes. More than 4 million Syrians are languishing in refugee camps and host communities in neighboring countries, such as Turkey, Lebanon, Jordan and Egypt. As noted in a UN report earlier this year, “Syria has become a country of poor people, with an estimated 4 in every 5 Syrians now living in poverty.” Furthermore, with the collapse of the healthcare system and daily violence targeting civilians, the life expectancy has shrunk from 76 to 56 years old.

People can’t help but wonder: what can I do?

May I suggest giving to the place where I work, Catholic Near East Welfare Association (CNEWA)? 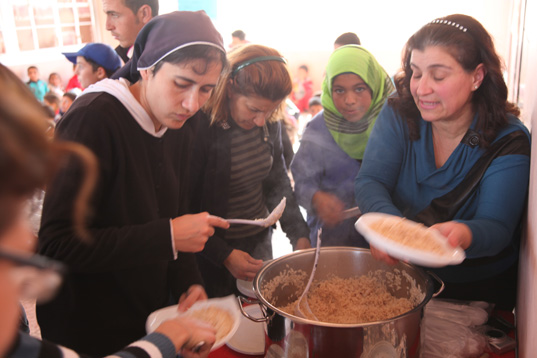 Sisters of the Good Shepherd help care for Syrian refugee children at a makeshift school in Lebanon’s Bekaa Valley.

An agency founded by the Holy Father in 1926, CNEWA has regional offices throughout some of the most troubled spots of the world. As our website explains:

CNEWA works for, through and with the Eastern Catholic churches to identify needs and implement solutions. From forming priests to serve the people of God in Egypt to providing irrigation to farmers in southern Lebanon — from teaching needy children in Ethiopia to educating sisters in India — from providing emergency relief to Syrian Christian refugees to counseling for war-scarred children in Gaza, CNEWA connects you to your brothers and sisters in need. Together, we build up the church, affirm human dignity, alleviate poverty, encourage dialogue — and inspire hope.

Check out a short video about CNEWA below:

And visit our website to learn more.  We also have a blog describing our work. And this giving page shows some of the many ways you can contribute.

Caritas has been asked by the Hungarian government to assist in supporting the growing tide of refugees; and CRS has just announced plans to expand its efforts in Greece, Albania and Macedonia.