“I appeal to parishes, religious communities, monasteries, shrines in Europe to accommodate a family of refugees” 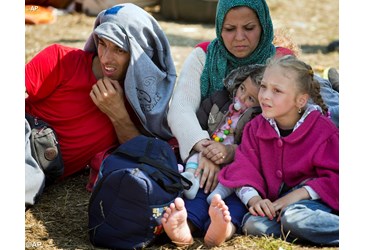 A rough translation of the pope’s historic remarks today during the Angelus:

Dear brothers and sisters, Mercy of God is recognized through our works, as we witnessed the life of Blessed Mother Teresa of Calcutta, which yesterday we commemorated the anniversary of the death. Faced with the tragedy of tens of thousands of refugees fleeing from death by war and hunger, and are on their way to a hope of life, the Gospel calls us, asks us to be “next”, the smallest and abandoned . To give them real hope. Not just say: “Courage, patience! …”. Christian hope is combative, with the tenacity of those who go to a safe destination. Therefore, [as we approach] the Jubilee of Mercy, I appeal to the parishes, religious communities, the monasteries and shrines throughout Europe to express the reality of the Gospel and accommodate a family of refugees. A concrete gesture in preparation for the Holy Year of Mercy. Every parish, every religious community, every monastery, every guest a family sanctuary of Europe, starting from my diocese of Rome. I turn to my brother Bishops of Europe, true shepherds, because their dioceses support this appeal of mine, remembering that Mercy is the second name of love: ” All I have done to the least of these my brethren, the ‘You did it to me “( Mt 25:40). The two parishes in the Vatican [in the days ahead] will welcome two families of refugees.

From The Wall Street Journal:

There are approximately 120,000 parishes in Europe, according to the Center for Applied Research in the Apostolate at Georgetown University. The pope added that the Vatican itself would receive two families in the next few days. The pope has made migration one of the major social causes of his pontificate. Only a few months after his election in 2013, he visited the southern Mediterranean island of Lampedusa, a major entry point for undocumented migrants to Europe, where he denounced rich nations’ indifference to the thousands who had died trying to cross the sea from North Africa. His latest appeal to Catholics to set an example of Christian mercy came as Germany and Austria received, via Hungary, one of the largest waves of displaced people since World War II: thousands of migrants, many of them fleeing Syria and other war-torn countries.