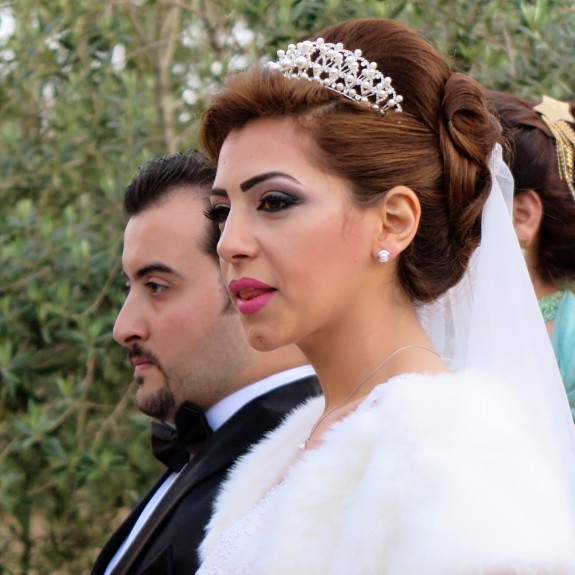 My traveling companion and blog neighbor Marge Fenelon captured on video a particularly lively part of the Greek Catholic Melkite wedding in Jordan I wrote about last week: the entrance of the bride and groom.

You have to see this. And listen for the gunshots. That moment almost gave me a coronary.

A Melkite deacon reader, after catching my original post on this, added some insight in an email:

Since the deacon wasn’t vested and was singing the “Kyrie eleison” and not the petitions preceding it (which is the deacon’s part), I’m guessing he was functioning as the cantor and not as the deacon. Since the cantor is the only one singing, people’s attention do tend to wander and it’s not unusual for people to wander around, sometimes to light a candle in front of an icon, or to grab a smoke, or make a phone call. That’s why the deacon is always saying, “Let’s us be attentive!” at the important parts. You were right, the crowning is the highlight of the ceremony, since that is the symbol of the sacrament. In fact, one is “Crowned in Holy Matrimony.” Our sacramental theology is different than the West’s in that since all the sacraments are tied to the Sacraments of Initiation, the priest is the minister of all the sacraments, including matrimony. That’s why the wedding vows aren’t part of the ceremony, since it’s the blessing of the priest, and not the consent of the couple that is required. (The couple express their consent during the Betrothal Ceremony, either before, or at the very beginning of the service. You’ll often hear the vows at weddings in this country, but that was an Latinization, and they often remain because people expect to hear them.) That’s also why deacons cannot witness a wedding (or baptize, for that matter) in the Byzantine tradition. The procession around the tetrapod is called “The Dance of Isaiah.” (The tetrapod is a small table set up in the front of the icon screen. A number of services take place at the tetrapod instead of the altar, which is behind the icon screen, because there’s no need to be at the altar.) It begins “Dance, O Isaiah, for the Virgin has conceived and has born a Son.” There are two other verses asking the martyrs and the Mother of God to pray and protect us. This dance is done at the end of the Sacraments of Initiation after the newly-enlightened has received the Eucharist. It’s repeated here at a wedding, and also at ordination to the diaconate, presbyterate, and episcopate. It’s meant to mark a transition point in one’s life and the beginning of a new journey. Finally, you may have noticed that the doors on the icon screen were opened. That’s because this is still Bright Week, the week after Easter when the open doors represent Christ’s resurrection opening, once again, the doors to Paradise. There’s also a lovely tradition that says whoever dies while the doors of the icon screen are open during Bright Week will enter immediately into Heaven.

Another person writing about this wedding is my fellow traveler Mark Pattison, over at CNS:

A couple of days after the fact, we get an explanation for some of what we saw. The hand-clapping song and the ululating were typical pre-wedding rituals in the region. The hand-raising is also customary in the Eastern church. The crowns were a reminder of the biblical mandate to go forth and multiply. The gun was a more recent tradition. After a churchwide recitation of a prayer I gathered must be the Our Father, Father Paul took a clear, small, glass cup filled with wine and gave it to the bride, groom and their attendants to drink. There was more ululating, and the men’s chorus was changing. There probably was not much more to this ceremony — we were told that a Melkite wedding generally runs 40 to 50 minutes — but we get the sign from the tour leaders that it was time for us to go. Mr. and Mrs. Bagain have a whole life yet to lead as husband and wife, but we American interlopers had a two-hour trek to get to a hotel on the Jordanian side of the Dead Sea. In a week filled with wonders, the intimacy and immediacy of this moment may rank as the best.

As I like to remind people: it’s a big Church. And thank God for that!