Learning about Islam from a Catholic archbishop: “In a way, the Quran is a sacrament, a sign of the presence of God” 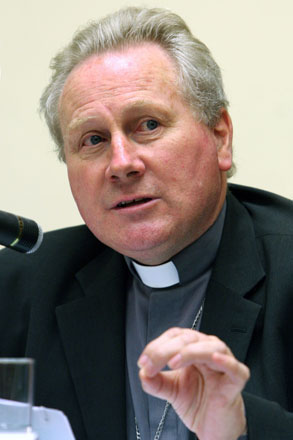 Now retired, the archbishop has turned his attention to writing and lecturing; this spring, he is a guest instructor at John Carroll University, a Jesuit institution in Cleveland, where he is teaching a course on the Quran to a small group of undergraduate and graduate students. In his class he often highlights differences between Christianity and Islam, though in such a way as to encourage respect for distinctive Muslim approaches. “In our ceremonies we read the scripture — the Gospel is read,” he said in a recent classroom session. “In Islamic prayer, it is not read, it is recited. The imam has to know the Quran. So it’s very good to become a … ,” and then Fitzgerald wrote the wordhafiz on the blackboard, explaining that it means someone who has memorized the Quran from start to finish. Noting that Muslims view the Quran as a sacred object and are careful about who touches it and how, Fitzgerald challenged his students to consider why the book is held in such esteem in Islam. “Would there be anything comparable in Catholic Christianity?” he asked. Sam Weinandy, a religious studies major sporting a ponytail and a T-shirt, raised his hand. “When I was reading about this, I thought about the Eucharist,” he said. “Because this is their direct word from God, and like the Eucharist is God for us, the Quran is God for them.” The answer clearly pleased Fitzgerald. “Yes,” he nodded. “In a way, the Quran is a sacrament, isn’t it? It’s a sign of the presence of God.” …Some Islamist leaders may object to the idea of a Catholic priest teaching Muslims about Islam, but Fitzgerald has impressed even Muslim scholars with his grasp of their religion. “What is important here is knowledge,” says Zeki Saritoprak, who directs the Islamic Studies program at John Carroll University, one of many Jesuit institutions in the United States that offer instruction in Islam, almost always with Muslim scholars. Saritoprak, who earned a doctorate in Islamic theology at a divinity school in his native Turkey, says he has known Fitzgerald for more than a decade and sees no problem with his teaching. “A well-informed Christian can teach Islam better than an ill-informed Muslim,” Saritoprak says. “I would rather have Muslims learning about Islam from a Christian like Archbishop Fitzgerald than from a propagandist for an organization like ISIS,” referring to the self-proclaimed Islamic State of Iraq and Syria, which has carried out horrific acts of terrorism in the name of Islam. “We have a strong emphasis on expertise in the Islamic tradition,” Saritoprak says. “One of the sayings of the Prophet [Muhammad] is that wisdom is something a Muslim should have, no matter where it comes from.”