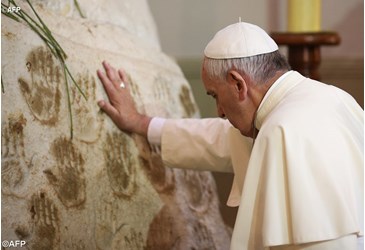 The Head of the Holy See’s Press Office, Father Federico Lombardi, said Pope Francis strongly appreciates expressions of popular piety and that’s why Saturday’s Mass at the Marian Shrine of Caacupé in Paraguay was undoubtedly a moment of “profound joy” for him:

Speaking about the Mass celebrated on Saturday at the Marian Shrine of Caacupé in Paraguay, Father Lombardi said this event was definitely one of the highlights of the entire visit to Latin America for Pope Francis.  He said the Pope very much appreciates popular piety, seeing it as “the expression of a profound faith.”  He also spoke of the Pope’s particularly strong personal “bond” with the devotion to the Virgin of Caacupé which dates back to the time when he ministered to Paraguayan immigrants living in Argentina. Another key event singled out by Father Lombardi was the Pope’s meeting with representatives of civil society in Asuncion, an encounter that brought together people from more than 1,000 different groups.   He described this as “a courageous initiative” on the Pope’s part, explaining that he wants these people to work together in a constructive manner for the common good despite often having very different ideas. Asked about Pope Francis’ various extra unscheduled stops during an already packed agenda in Paraguay, Father Lombardi paid tribute to the Holy Father’s “incredible energy”, saying he’s “always ready for new initiatives.”

It also strikes me that one element of this papacy that is often overlooked is Pope Francis’ deep devotion to Mary. He never fails to mention her wherever he goes, and he almost always begins and ends his pilgrimages with visits to her shrine at St. Mary Major.

Here, for example, is a reference from his landmark speech in Bolivia last week:

Let us always have at heart the Virgin Mary, a humble girl from small people lost on the fringes of a great empire, a homeless mother who could turn a stable for beasts into a home for Jesus with just a few swaddling clothes and much tenderness. Mary is a sign of hope for peoples suffering the birth pangs of justice. I pray that Our Lady of Mount Carmel, patroness of Bolivia, will allow this meeting of ours to be a leaven of change.

He is truly a Marian pope.