Meet the Imam who sat next to the pope 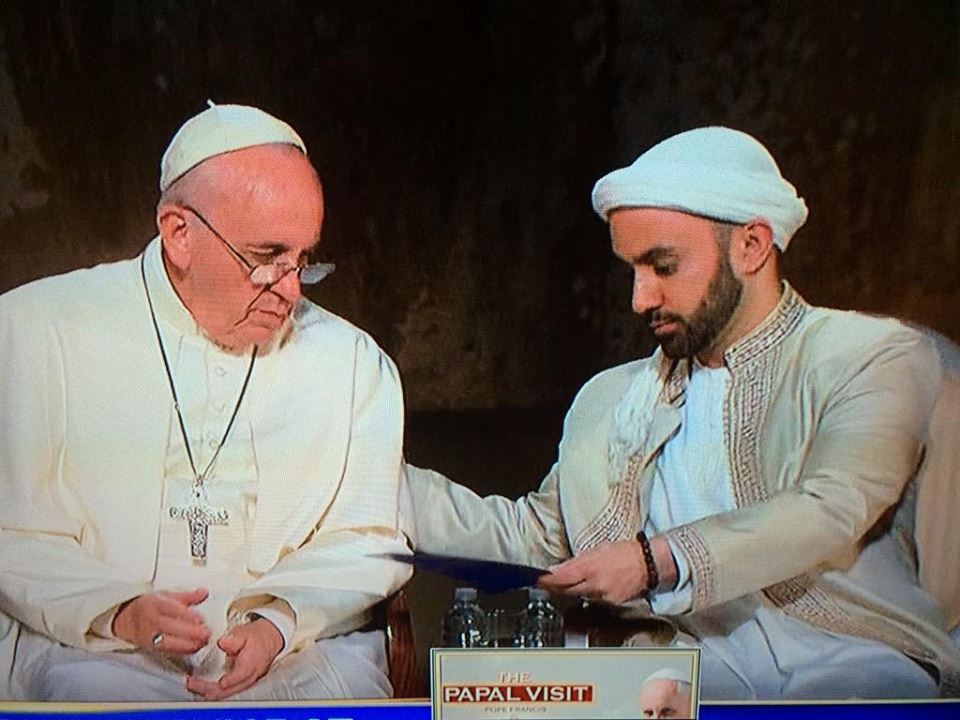 Last night, I attended the bi-annual joint Clergy Convocation for the Diocese of Brooklyn— bringing together priests, bishops and deacons for Evening Prayer, fellowship and (of course) a great meal. This year’s after-dinner talk included a panel discussion on the 50th anniversary of Nostra Aetate. One of the presenters was a young Imam, Khalid Latif, whose eloquence, passion and intelligence impressed everyone.

He serves as the Muslim chaplain for the New York Police Department. But he may be most famous and recognizable to people around the world as the Imam who sat next to Pope Francis during his moving interfaith ceremony at Ground Zero.

Curious to learn more about him, I uncovered this brief bio:

At first glance, in his blue inspector’s uniform with brass eagles on the shoulders, Khalid Latif resembles a typical cop on the beat. But as the New York Police Department’s second-ever Muslim chaplain, he doesn’t carry a gun and, in place of a police hat, he wears a skullcap. “There’s really nobody else in the department who looks like me,” concedes Latif, who provides counsel to the NYPD’s 53,000 uniformed and civilian employees—the majority of them non-Muslims. Last year, for example, he responded to an emergency call after a Russian officer had been shot during a traffic stop. The officer’s family was Russian Orthodox and spoke little English, but Latif kept vigil with them until the man died the following morning. “I don’t see myself as the ‘Muslim chaplain,’ so to speak,” Latif says. “I’m just there to help individuals regardless of their faith.” It’s this mind-set of compassion and respect that has allowed Latif to dissolve many religious and ideological barriers at NYPD and far beyond. At 25, and although still studying at the Hartford Seminary—the nation’s first accredited Muslim chaplaincy program—he is one of the New York metro area’s leading voices for mainstream Islam and the face of major efforts to refute negative perceptions of the faith. “What 9/11 taught me is that Muslims can’t be so passive when we see inaccuracies in the portrayal of Islam,” says Latif, who took his NYPD post last April and has served as NYU’s inaugural Muslim chaplain since 2005. “We must collectively engage the outside world—by no means proselytize the masses—but combat the fringe elements that have dominated the conversation for too long.” And he is spreading this message however he can. Latif podcasts his Friday sermons on his NYU Web site, http://www.icnyu.org, which receives 10,000 hits per month, and blogged his hajj to Mecca in 2005.Newsweek put him on its cover last summer for its “Islam in America” feature. He has spoken at national interfaith conferences with hip-hop mogul Russell Simmons and other luminaries. Latif’s understated sermons and conciliatory nature may be part of his appeal, but equally important is his own history. The son of Pakistani immigrants, he grew up in a Muslim enclave of Edison, New Jersey, captained his high school football team, and drove a Lexus that his friends labeled the babe mobile. He was into the rap group Bone Thugs-N-Harmony and working out. “When I was young, religion didn’t really take precedence over other things for me,” he says. “I didn’t see it as my calling then.” His faith emerged as an NYU freshman once he interacted with other Muslims. Even so, he remains mindful of the lessons of his youth, when he was estranged from religion by the restrictive orthodoxy that pervaded his local mosques. By contrast, he describes his faith today as “inclusive without compromising established traditions of the religion.” In that way, he’s become a bridge for young Muslims reconciling their American upbringings and their personal devotions to Islam. A college campus can be the ultimate battleground for these two identities—a place where lax attitudes about alcohol and premarital sex collide with the tenets of Islam. But where more traditional mosques might ostracize someone who strays from the flock, Latif sees opportunity—with limits. “I wouldn’t push away a Muslim who drinks,” he says, “but I also wouldn’t hold a prayer service with an open bar.”