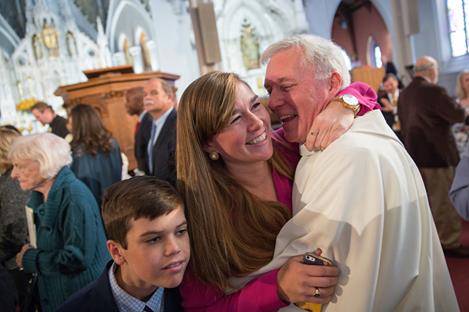 It happened on Saturday, and here’s the preview from The Boston Pilot:

Cardinal Seán P. O’Malley will ordain twelve men to the Order of Permanent Deacon at the Cathedral of the Holy Cross on Oct. 17, 2015 at 10 a.m. The candidates began their studies in September 2011 when they started attending classes two nights a week. In addition, they met one Saturday a month for formation and made two retreats a year, one with their wives and one together with their class. After ordination, the men have the option to continue their studies at the Theological Institute at St. John’s Seminary to complete their master’s degree in theology. As Cardinal O’Malley ordains each of the 12 men through the Sacrament of Holy Orders he will instruct them to, “Receive the Gospel of Christ, whose herald you now are. Believe what you read, teach what you believe, and practice what you teach.” The Permanent Diaconate Program is open to men between the ages of 35 and 60, married or single, who are called to serve as ministers of the Word, of the liturgy and of charity. There are currently over 200 men serving as permanent deacons in the Archdiocese of Boston and over 17,000 men serving across the United States. In the Boston area, permanent deacons serve as chaplains in hospitals and prisons, in high schools and on college campuses as well as assist at the liturgies in parishes, administer the sacraments of baptism and matrimony and serve in administrative positions in the archdiocese. Permanent deacons in the archdiocese have two assignments, one to a parish and a second assignment to a particular department within the archdiocese.

Read the biographies of the newly ordained here.

And you can view an album of photographs of the ordination here.