And, on top of that, two transitional deacons, to boot.

I had to catch a plane Saturday afternoon and couldn’t be there, but The Criterion’s Sean Gallagher alerted me to this great photo gallery, just posted today, and some highlights below: 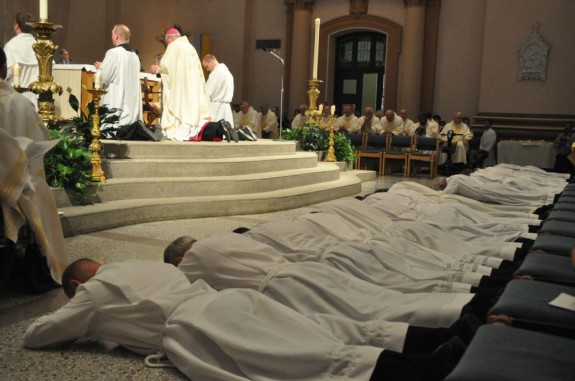 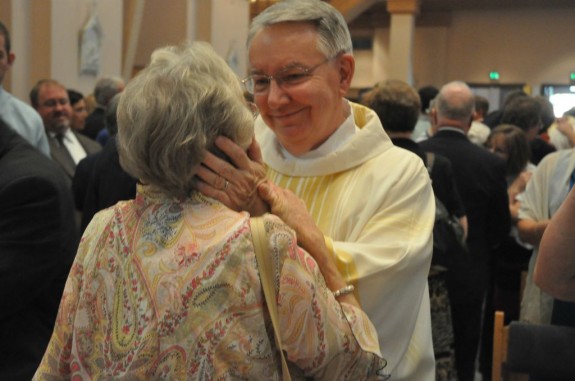 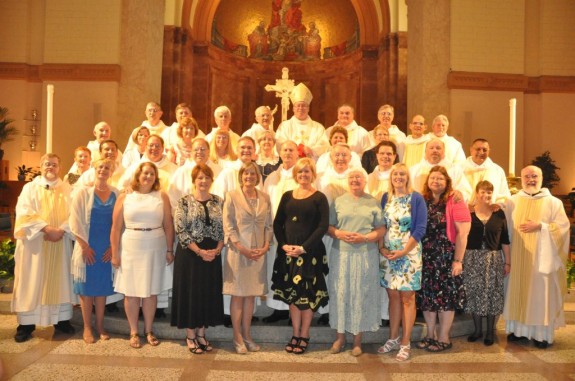 A story ina recent issue of the paper underscored the significance of this event:

The reach of deacons ministering in central and southern Indiana—which only began on a wide-scale basis four years ago—will soon grow considerably. On June 23, Bishop Christopher J. Coyne, apostolic administrator, will ordain 16 new permanent deacons for the Archdiocese of Indianapolis. They have participated in the archdiocese’s deacon formation program for the past four years. The ordination will take place at 10 a.m. at SS. Peter and Paul Cathedral in Indianapolis. A limited amount of public seating will be available during the ordination liturgy. Also to be ordained that day to the transitional diaconate will be seminarians Douglas Marcotte and Martin Rodriguez. They expect to be ordained to the priesthood in June 2013. When the candidates for the permanent diaconate start ministering in July after their ordination, 48 parishes in central and southern Indiana will have deacons assigned to them—nearly one-third of the faith communities in the archdiocese. They will also minister at a growing number of hospitals, nursing homes and correctional facilities that have not had a regular Catholic ministerial presence in the past. The prospect of being a part of this expansion of diaconal ministry has impressed deacon candidate Rick Cooper, a member of St. Mary Parish in Lanesville in the New Albany Deanery. “It’s exciting, but it’s also a very humbling thing,” he said. “We get to be a minister for the Church. We get to expand the Church and what the Church is able to do. That’s really an important thing because there are places that we will go that others haven’t been to before.” Deacon Michael East, director of deacons for the archdiocese, shares Cooper’s excitement. “It’s more boots on the ground, if you will,” said Deacon East, who ministers at Our Lady of Providence Parish in Brownstown and St. Ambrose Parish in Seymour. “With each of these gentlemen comes another perspective, another set of eyes, another understanding of the needs of a particular parish or community.” Deacon East and other members of the archdiocese’s first class of permanent deacons, who were ordained in 2008, have helped form the 16 men to be ordained deacons. That is especially true for Deacon Kerry Blandford, director of deacon formation for the archdiocese. After spending four years with the candidates, Deacon Blandford sees them as family. “It’s kind of like turning your kids loose and sending them off to college,” said Deacon Blandford, who also ministers at St. Mark the Evangelist Parish in Indianapolis. “They’re graduating. Our kids are gone. There’s an emotional attachment there.” Cooper has appreciated the help that he has received in the formation program from the deacons ordained in 2008. He is just as thankful for how their life and ministry as deacons have led so many Catholics across central and southern Indiana to come to understand the diaconate and its place in the Church. “They’ve helped the archdiocese understand who a deacon is and what a deacon does,” Cooper said. “It will make things easier for all of us as we go forward.”

The photo you posted of the deacon smiling and holding a woman’s head in his hands–she’s the widow of a deacon from Richmond, IN who died four years ago just six weeks after being ordained. The smiling deacon was his friend, wearing his friend’s dalmatic. The dying deacon blessed his friend (and another candidate from Richmond) as they were leaving for their first formation weekend. He died two days later…