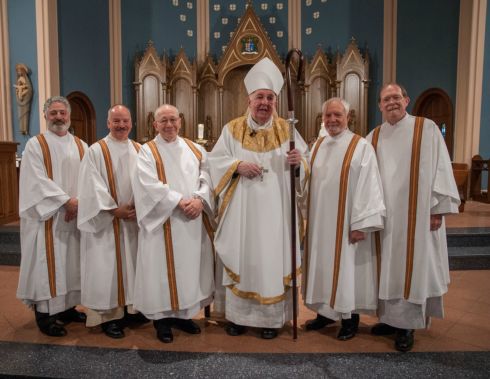 Five men were ordained permanent deacons for the Diocese of Springfield as part of an 11 a.m. ordination Mass held at St. Michael’s Cathedral here May 25.

Springfield Bishop Timothy A. McDonnell presided over the “Rite of Diaconate Ordination” as the men from across western Massachusetts became the newest permanent deacons in the diocese. The newly-ordained are: Deacon David A. Culliton of Greenfield; Deacon Keith T. Davies of Ware; Deacon George L. Galli, Jr. of Williamstown; Deacon Daniel P. Romanello of West Stockbridge and Deacon Spencer L. Trova of Pittsfield. More than 200 attended the hour-and-a-half-long Mass. Included in the crowd were family members, friends and fellow clergy. The ceremony began with the calling of the candidates. The men were then formally presented to the bishop as ready for ordination. Deacon Trova, who nearly missed out on being ordained because of health concerns earlier this year, told iobserve that the ordination was especially joyous. “It’s a wonderful feeling and quite emotional as you can imagine,” he said immediately following the ceremony. Speaking of the four year formation program, he said, “It’s been a long haul.” Deacon Romanello agrees that the journey was difficult, but well worthwhile. “It was sometimes daunting, but it does call you to really look inside yourself and say ‘is this what the Lord is calling me to do?’ And I can say that there was never any doubt in my mind that this was where God wanted me to be.”

Read it all. Congratulations and welcome, brothers!  Ad multos annos!