Phoenix bishop releases Apostolic Exhortation to men, “Into the Breach,” complete with its own website and video 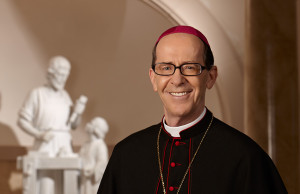 Bishop Thomas Olmstead just might be making history with this, and utilizing the tools of the modern era in a bold new way.

This is an Apostolic Exhortation, targeting specifically men, released with its own splashy website and dramatic promotional video, almost like the trailer of a Hollywood movie.

I received an email about this Tuesday afternoon:

The title of this exhortation, “Into the Breach,” obviously references Shakespeare’sHenry V:

Once more unto the breach, dear friends, once more; Or close the wall up with our English dead! In peace there’s nothing so becomes a man, As modest stillness and humility; But when the blast of war blows in our ears, Then imitate the action of the tiger: Stiffen the sinews, conjure up the blood, Disguise fair nature with hard-favoured rage: Then lend the eye a terrible aspect; Let it pry through the portage of the head, Like the brass cannon; let the brow o’erwhelm it As fearfully as doth a galled rock O’erhang and jutty his confounded base, Swill’d with the wild and wasteful ocean.

Shakespeare notwithstanding, the beginning of the letter quotes Ezekiel:

“And I sought for a man among them, who should build up the wall and stand in the breach before me for the land…” (Ezekiel 22:30)

You can read the full letter at its website, in both English and Spanish. It begins:

I begin this letter with a clarion call and clear charge to you, my sons and brothers in Christ: Men, do not hesitate to engage in the battle that is raging around you, the battle that is wounding our children and families, the battle that is distorting the dignity of both women and men. This battle is often hidden, but the battle is real. It is primarily spiritual, but it is progressively killing the remaining Christian ethos in our society and culture, and even in our own homes. The world is under attack by Satan, as our Lord said it would be (1 Peter 5:8-14). This battle is occurring in the Church herself, and the devastation is all too evident. Since AD 2000, 14 million Catholics have left the faith, parish religious education of children has dropped by 24%, Catholic school attendance has dropped by 19%, infant baptism has dropped by 28%, adult baptism has dropped by 31%, and sacramental Catholic marriages have dropped by 41%.[1] This is a serious breach, a gaping hole in Christ’s battle lines. While the Diocese of Phoenix has fared better than these national statistics, the losses are staggering. One of the key reasons that the Church is faltering under the attacks of Satan is that many Catholic men have not been willing to “step into the breach” – to fill this gap that lies open and vulnerable to further attack. A large number have left the faith, and many who remain “Catholic” practice the faith timidly and are only minimally committed to passing the faith on to their children. Recent research shows that large numbers of young Catholic men are leaving the faith to become “nones” – men who have no religious affiliation. The growing losses of young Catholic men will have a devastating impact on the Church in America in the coming decades, as older men pass away and young men fail to remain and marry in the Church, accelerating the losses that have already occurred. These facts are devastating. As our fathers, brothers, uncles, sons, and friends fall away from the Church, they fall deeper and deeper into sin, breaking their bonds with God and leaving them vulnerable to the fires of Hell. While we know that Christ welcomes back every repentant sinner, the truth is that large numbers of Catholic men are failing to keep the promises they made at their children’s baptisms – promises to bring them to Christ and to raise them in the faith of the Church. This crisis is evident in the discouragement and disengagement of Catholic men like you and me. In fact, this is precisely why I believe this Exhortation is needed, and it is also the reason for my hope, for God constantly overcomes evil with good. The joy of the Gospel is stronger than the sadness wrought by sin! A throw-away culture cannot withstand the new life and light that constantly radiates from Christ. So I call upon you to open your minds and hearts to Him, the Savior who strengthens you to step into the breach! Purpose of this Exhortation I offer this Exhortation as an encouragement, a challenge, and a calling forth to mission for every willing man in the Diocese of Phoenix: priests and deacons, husbands, fathers and sons, grandfathers and widowers, young men in preparation for your vocation – that is, each and every man. With this Exhortation, I want to clarify for you the nature of this mission from Christ, for which I will rely on the clear guidance of the Holy Scriptures, the Magisterium of the Church, and the example of the saints. In this Exhortation, I will address three primary questions: Before addressing these three basic questions, it is important to put them into proper context.