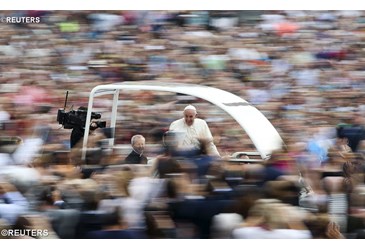 And John Thavis is wondering just what he’s talking about:

The problem in interpreting his remarks was that there are several scandals to choose from. The gay official of the Vatican’s doctrinal congregation who recently came out with his partner, saying the climate at his workplace was homophobic? Accusations of sexual impropriety made by a group of Catholics against priests and an official of the Carmelite religious order in Rome? The resignation of Rome’s leftist mayor, Ignazio Marino, following press reports that the pope was unhappy with the mayor’s action on a number of issues? The accusations of sexual abuse against a Vatican diplomat, who was found dead in his Vatican residence in late August before he could stand trial? Or this week’s leak of a “Letter of 13” cardinals to the pope, contesting the direction and methods of the current Synod of Bishops on the Family, which was followed by a series of confusing denials and clarifications? “Jesus is realistic and it is inevitable that scandals occur,” the pope said at the start of his general audience in St. Peter’s Square. “But woe to the person who causes scandal. Before I start this catechesis, I’d like to ask you for forgiveness, in the name of the church, for the scandals that have occurred both in Rome and in the Vatican in recent times.” Perhaps it’s likely that the pope had sexual abuse in mind. After his off-the-cuff remarks, he spoke in his regular audience talk about the place of children in the family. Every child trusts that he or she will be loved, the pope said, and “when that promise is broken, the result is a ‘scandal’ which Jesus condemns.”

He has some other thoughts on recent Vatican news, as well. Check it out.