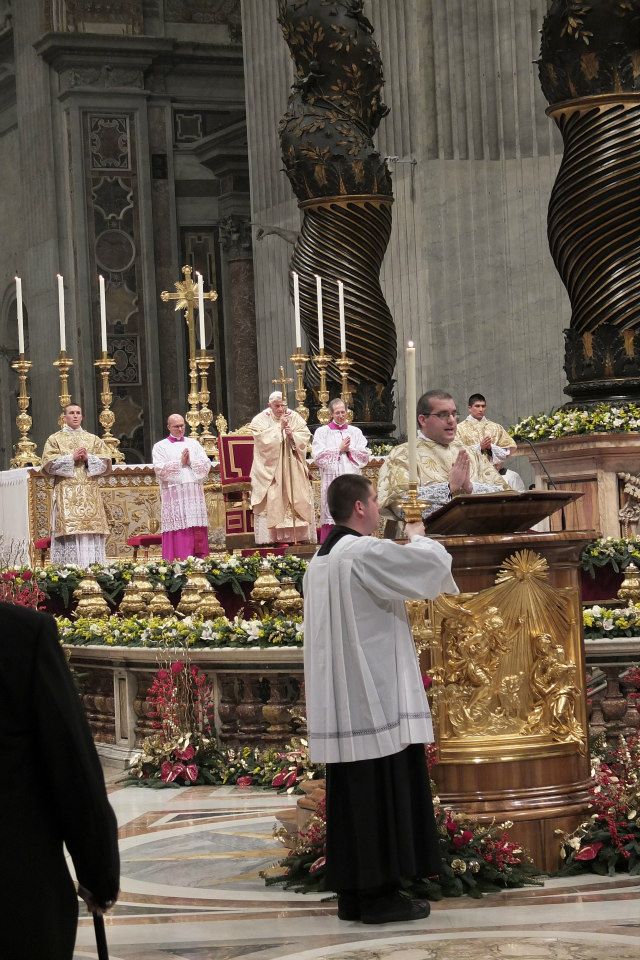 Worth revisiting, I think.  His remarks from Lent 2008, via Zenit:

Following a Lenten tradition, Benedict XVI met Thursday with parish priests and clergy of the Diocese of Rome. During the meeting, the participants asked the Pope questions. Here is a translation of the first question and the Holy Father’s answer.

Holy Father, I would like first of all to express my gratitude and that of my brother deacons for the ministry that the Church so providentially has taken up again with the [Second Vatican] Council, a ministry that allows us to fully express our vocation. We are committed in a great variety of works that we carry out in vastly different environments: family, work, parish, society, also the missions of Africa and Latin America — areas that you indicated for us in the audience you granted us on the occasion of the 25th anniversary of the diaconate of the Diocese of Rome.

Now our numbers have grown — there are 108 of us. And we would like for you to indicate a pastoral initiative that could become a sign of a more incisive presence of the permanent diaconate in the city of Rome, as it happened in the first centuries of the Roman Church. In fact, sharing a significant, common objective, on one hand increases the cohesion of diaconal fraternity and on the other, would give greater visibility to our service in this city. We present you, Holy Father, the desire that you indicate to us an initiative that we can share in the way and the manner that you wish to specify.

In the name of all the deacons, I greet you, Holy Father, with filial affection.

Thank you for this testimony as one of the more than 100 deacons of Rome. I would like to also express my joy and my gratitude for the Council, because it revived this important ministry in the universal Church. I should say that when I was archbishop of Munich, I didn’t find perhaps more than three or four deacons, and I very much favored this ministry because it seemed to me to belong to the richness of the sacramental ministry in the Church.

At the same time, it can equally be the link between the lay world, the professional world, and the world of the priestly ministry — given that many deacons continue carrying out their professions and maintain their positions — important or those of a simple life — while on Saturday and Sunday they work in the Church. In this way, you give witness in the world of today, as well as in the working world, of the presence of faith, of the sacramental ministry and the diaconal dimension of the sacrament of Orders. This seems very important to me: the visibility of the diaconal dimension.

Naturally as well, every priest continues being a deacon, and should always think of this dimension, because the Lord himself made himself our minister, our deacon. We can think of the gesture of the washing of the feet, with which he explicitly shows that the master, the Lord, acts as a deacon and wants those who follow him to be deacons that they fulfill this role for humanity, to the point that they also help to wash the dirtied feet of the men entrusted to us. This dimension seems very important to me.

On this occasion, I bring to mind — though it is perhaps not immediately inherent to the theme — a simple experience that Paul VI noted. Each day of the Council, the Gospel was enthroned. And the Pontiff told those in charge of the ceremony that he would like one time to be the one who enthrones the Gospel. They told him no, this is the job of the deacons, not of the Pope. He wrote in his diary: But I am also a deacon, I continue being a deacon, and I would like to also exercise this ministry of the diaconate placing the word of God on its throne.

Thus, this concerns all of us. Priests continue being deacons, and the deacons make explicit in the Church and in the world this diaconal dimension of our ministry. This liturgical enthroning of the word of God each day during the Council was always for us a gesture of great importance: It told us who was the true Lord of that assembly; it told us that the word of God was on the throne and that we exercise our ministry to listen and to interpret, to offer to the others this word.

It is broadly significant for all that we do: enthroning in the world the word of God, the living word, Christ. May it really be him who governs our personal life and our life in the parishes.

Now, you have asked me a question that, I must say, goes a bit beyond my strengths: What would be the tasks proper to the deacons of Rome. I know that the cardinal vicar knows much better than I the real situations of the city and the diocesan community of Rome.

I think that one characteristic of the ministry of the deacons is precisely the multiplicity of the diaconate’s applications. In the International Theological Commission, a few years ago, we studied at length the diaconate in the history and also the present of the Church. And we discovered just that: There is not just one profile. What they should do varies, depending on the preparation of the persons and the situations in which they find themselves.

There can be applications and activities that are very different, always in communion with the bishop and with the parish, naturally. In the various situations, various possibilities arise, also depending on the professional preparation that these deacons could have. They could be committed in the cultural sector, which is so important today, or they could have a voice and an important post in the educational realm. We are thinking this year precisely of the problem of education as central to our future, and the future of humanity.

Certainly the sector of charity was in Rome the original sector, because those called presbyters and deacons were centers of Christian charity. This was from the beginning in the city of Rome a fundamental area. In my encyclical “Deus Caritas Est,” I showed that not just preaching and the liturgy are essential for the Church and for the ministry of the Church, but rather equally important is the service of caritas — in its multiple dimensions — for the poor, the needy.

Thus, I hope that all the time, in the whole diocese, even if in distinct situations, this continues being a fundamental dimension, and also a priority for the commitment of the deacons, even if not the only one, as is also shown in the early Church, where the seven deacons were chosen precisely to permit the apostles to dedicate themselves to prayer, liturgy and preaching. Also afterward, Stephen found himself in the situation of having to preach to the Greeks, to the Jews who spoke Greek, and thus the field of preaching was amplified.

He is conditioned, we could say, by the cultural situation, where he has a voice to make present in that sector the word of God. In that way, he makes more possible the universality of the Christian testimony, opening the doors to St. Paul who witnessed his stoning, and later, in a certain sense, was his successor in the universalization of the word of God. I don’t know if the cardinal vicar would like to add something; I’m not as close to the concrete situations.

[Cardinal Camillo Ruini, the Pope’s vicar for the Diocese of Rome:]

Holy Father, I can just confirm, as you said, that also concretely in Rome, the deacons work in many sectors, for the most part, in parishes, where they concern themselves with the ministry of charity; but, for example, many are also involved in ministry to the family. Since almost all of the deacons are married, they offer marriage preparation, give follow-up to young couples, and things like that.

They also offer a significant contribution to the ministry of health care; they help also in the vicariate — where some of them work — and as you heard, in missions. There is a certain missionary presence of deacons. I think that, naturally, in the numerical plane, the greatest commitment is in the parishes, but there also exist other sectors that are also opening, and precisely because of this, we now have more than a hundred permanent deacons.