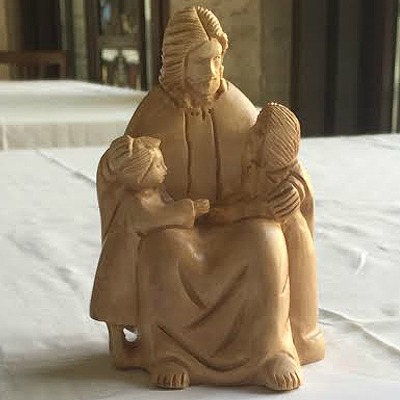 After reading a letter while visiting Rome’s North American Seminary detailing the death of two young girls in a house fire, Pope Francis blessed their picture and a small statue to be given to their parents. “The Holy Father read the story about what happened and he was very moved by it. He prayed for the family and for the girls, and in fact he even put his hand on their picture as a sign of his affection for them,” Father Aaron Qureshi told CNA  May 2. Fr. Qureshi was ordained a priest for the archdiocese of Washington D.C. after studying at the Pontifical North American College in Rome. He is the one who wrote the letter at the request of a friend who is close to the family of the deceased. The priest, who was present for Pope Francis’ May 2 visit to the seminary where he celebrated Mass in honor of Bl. Junipero Serra, also purchased a statue of Jesus embracing two children while on a trip to the Holy Land, which will be given to the girls’ parents. The statue, which was blessed by the Pope when he stopped to pray for the girls, will be given to their parents on Mother’s Day as a sign that Jesus is now taking care of their daughters in heaven.