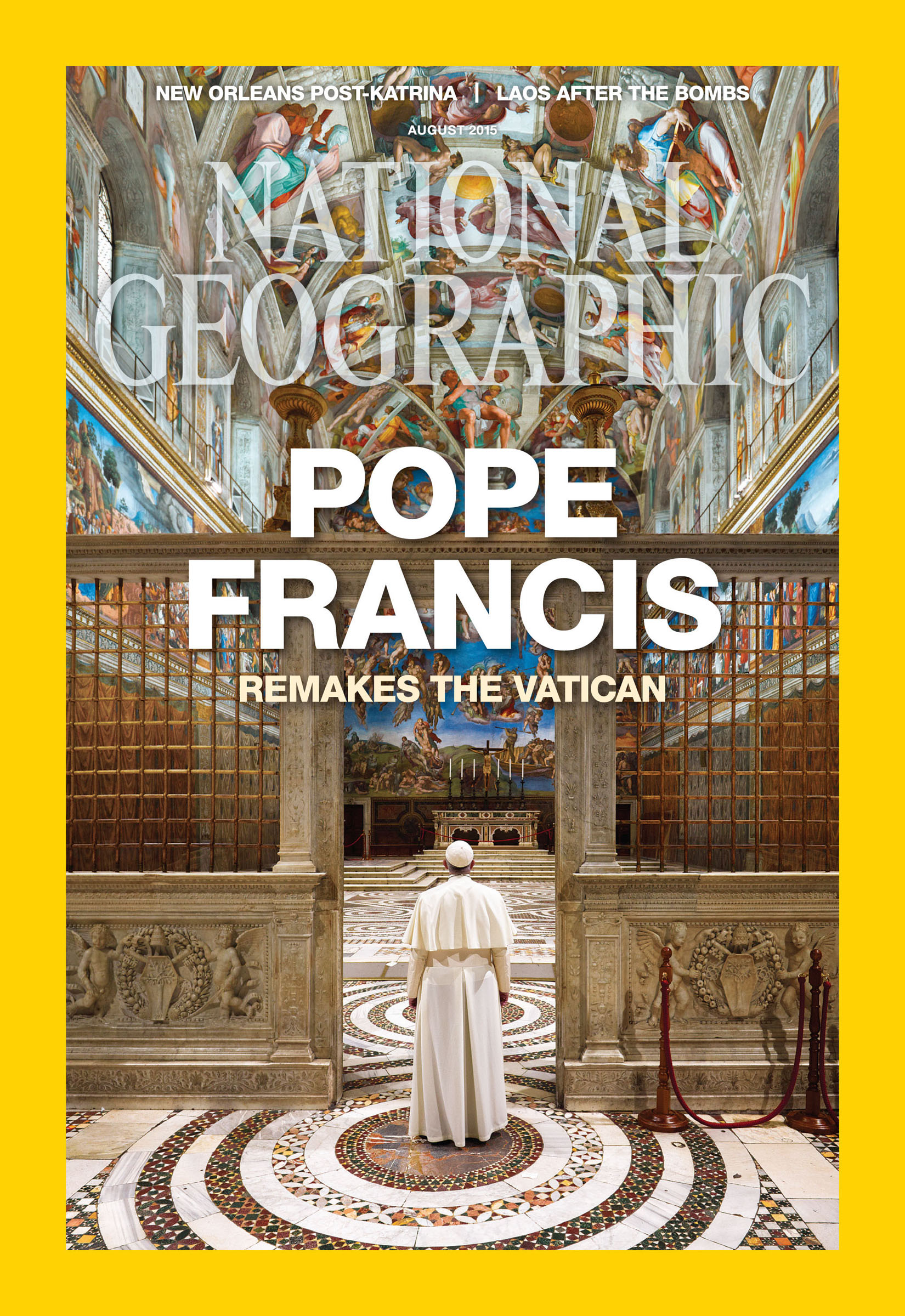 From the magazine’s cover story:

“I really need to start making changes right now,” Francis told a half dozen Argentine friends one morning just two months after 115 cardinals in the Vatican conclave vaulted him from relative obscurity into the papacy. To many observers—some delighted, others discomfited—the new pope already had changed seemingly everything, seemingly overnight. He was the first Latin American pope, the first Jesuit pope, the first in more than a thousand years not to have been born in Europe, and the first to take the moniker Francis, in honor of St. Francis of Assisi, champion of the poor. Shortly after his election on March 13, 2013, the new leader of the Catholic Church materialized on a balcony of St. Peter’s Basilica all in white, without the traditional scarlet cape over his shoulders or gold-embroidered red stole around his neck. He greeted the roaring masses below with electrifying plainness: “Fratelli e sorelle, buona sera—Brothers and sisters, good evening.” And he closed with a request, what many Argentines already knew to be his signature line: “Pray for me.” When he departed, he walked past the limousine that awaited him and hopped into the bus ferrying the cardinals who had just made him their superior. The next morning the pope paid his bill at the hotel where he had been staying. Forswearing the traditional papal apartments inside the Apostolic Palace, he elected to live in a two-bedroom dwelling in Casa Santa Marta, the Vatican’s guesthouse. In his first meeting with the international press he declared his primary ambition: “How I would like a church that is poor and for the poor.” And instead of celebrating the evening Mass for Holy Thursday (commemorating the Last Supper) at a basilica and washing the feet of priests, as was traditional, he preached at a youth prison, where he washed the feet of a dozen inmates, including women and Muslims, a first for a pope. All this took place during his first month as bishop of Rome.

Check the link for the rest.

Meantime, National Geographic this week also announced a new book about the Vatican:

Since his ascent to the papacy in 2013, Pope Francis has electrified the world and infused the Vatican with unprecedented energy. National Geographic photographer Dave Yoder was given over six months of special access to the pope to document his daily life inside the Vatican. POPE FRANCIS AND THE NEW VATICAN (National Geographic Books, ISBN: 978-1-4262-1582-7; Aug. 4, 2015; $40) beautifully captures the spirit of the new Vatican and the transformation sweeping through the Catholic Church. Through breathtaking photography and exclusive reporting, POPE FRANCIS AND THE NEW VATICAN showcases the pope’s public life and personal convictions as never before. Yoder’s photos and the stories behind them, written by acclaimed author and journalist Robert Draper, highlight the deep love and mercy that lies at the heart of Francis’ ministry. Draper spent a month in Rome interviewing Vatican officials and three weeks in Argentina interviewing dozens of Pope Francis’ lifelong friends, many of whom had never spoken with the media before. Draper’s essays reveal the themes that have been woven through the pope’s entire life. The Vatican finds the pope to be a paradox. Known as the “available pope,” a contradiction in terms, he is hailed by the press as a reformer, a radical and a revolutionary. Those close to him in Rome say he is all of these things, and yet none of them. The answer to the question reverberating around the world remains a mystery: Will Pope Francis change the Vatican, or will the Vatican change him? “He won’t change doctrine. What he will do is return the Church to its true doctrine — the one it has forgotten, the one that puts man back in the center,” says the pope’s longtime friend, Franciscan priest Ramiro de la Serna. Timely and poignant, POPE FRANCIS AND THE NEW VATICAN reveals this spiritual revolutionary through a new lens. Yoder and Draper take readers on a stunning journey through the complexities of the new Vatican under Pope Francis, his early life and journey to the papacy, and the Church’s relationship with our rapidly changing world. Publishing just ahead of Pope Francis’ first trip to the United States in September 2015, the book is being released in conjunction with the August issue of National Geographic magazine, which features Yoder and Draper’s work on the pope and the Vatican as the cover story. The magazine is on digital newsstands now and will be on print newsstands July 28. For National Geographic’s youngest fans, National Geographic Kids is simultaneously releasing a Level 1 reader, POPE FRANCIS (978-1-4263-2253-2; Aug. 4, 2015; $3.99), available in English and Spanish.