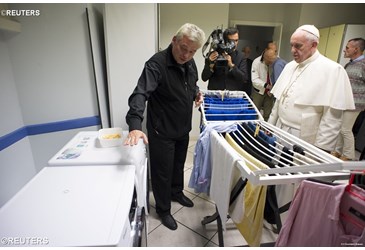 On Thursday, Pope Francis made a surprise visit to the new Jesuit homeless shelter, ‘Gift of Mercy’, just around the corner from the Vatican. All 30 guests at ‘Gift of Mercy’ (Dono di Misericordia), most of whom are Italian, were overjoyed to see the Holy Father and were eager to tell him their life stories and ask for his blessing. In his inimitably personal way, the Pope spoke to the men one by one and then asked to be given a tour of the shelter itself. The Pope was welcomed by mons. Konrad Krajewski, Jesuit Superior General Fr Adolfo Nicolás and by several nuns from Mother Teresa’s Missionaries of Charity, who run the shelter with the help of volunteers. On 7th October, the homeless shelter was opened by the Society of Jesus, in honour of Our Lady of the Rosary. The Jesuits founded the shelter in response to the Pope’s recent call for religious institutions to offer more buildings to be used for the care of those in need.