This Sunday, we encounter once again the amazing story of how Jesus, using just a few loaves and fishes, fed thousands. 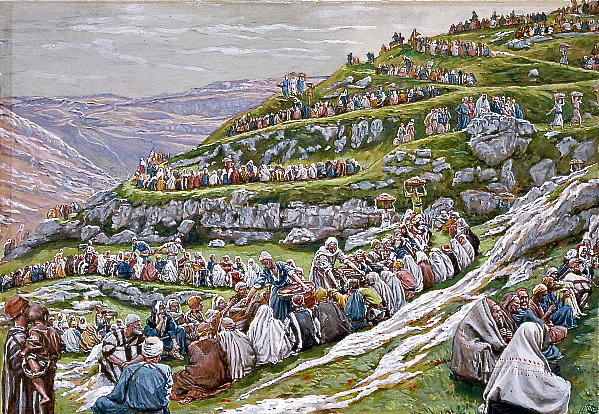 Among the many truths buried in this episode, we can conclude that: Christ feeds the hungry, that he gives us more than we could ever need, that he transforms the ordinary into the extraordinary. The miracle also beautifully foreshadows the Eucharist, and the gift of finest wheat.

This gospel does all that.

What it does not do is tell us what a great thing it is to share.

Amy Welborn wrote about this a few years ago.  She described an acquaintance who heard that very message preached from the pulpit and who was, understandably, appalled. Amy tracked down the origin of that interpretation, which seems to be the Protestant biblical commentator William Barclay. He wrote:

Picture the scene. There is the crowd; it is late; and they are hungry. But was it really likely that the vast majority of that crowd would set out around the lake without any food at all? Would they not take something with them, however little? Now it was evening and they were hungry. But they were also selfish. And no one would produce what he had, lest he have to share it and leave himself without enough. Then Jesus took the lead. Such as he and his disciples had, he began to share with a blessing and an invitation and a smile. And thereupon all began to share, and before they knew what was happening, there was enough and more than enough for all. If this is what happened, it was not the miracle of the multiplication of the loaves and fishes; it was the miracle of the changing of selfish people into generous people at the touch of Christ.

So there you have it, neatly packaged for the lazy preacher who will use it to sound clever, no matter how many problems the explanation holds: If everyone brought some food, who, exactly, was left to be hungry? This interpretation suggests that first-century Jews were naturally averse to sharing, which is not only offensive, but historically and culturally inaccurate. It may be a miracle for 21st century Americans to share, but sharing and hospitality were sacred obligations for Jesus’ listeners. Yes, there are layers of meaning to this event. It is of little use as a bare fact as it is as a fabrication. Miracles are offered as complex signs of God’s presence and activity among us, working through and even with us at times, open to rich interpretation in infinite application. But to presume that the Gospel writers couldn’t have meant what they wrote implies that they were either stupid or dishonest. The Scripture is a collection of diverse works, meant to be understood within the specific literary forms God used to communicate truth. But as the Gospel writers themselves make clear, they are not about anything but historical truth about an historical figure named Jesus. Anything less wouldn’t have been worth their time. Or their lives. Or ours, come to think of it, don’t you think?

Others have picked apart this interpretation, too. Here’s Jimmy Akin:

It’s just annoying when preachers get so wrapped up in a sickly sweet, Hallmark card spirituality that they go off rhapsodizing about human sharing and generosity in a way that flies in the face of the text. The point here is that God did a miracle through Jesus, not that a little boy was generous. Sheesh!

Sharing food was not a miracle in Jesus’ culture.  This is not only known, but much capitalized upon, when the text under discussion is not John 6, but Genesis 19.  Then we are often informed that the real sin of Sodom had nothing to do with sodomy but was, instead, lack of hospitality (Ezekiel 16:49).  Prescinding from the fact that the threat of homosexual rape implied in Genesis 19:5 is a particularly acute form of inhospitality, I agree heartily with Ezekiel—and so did most people in the ancient Near East.  Failure to show hospitality was a very big deal. Indeed, it still is.  The father of a Palestinian Christian family I know of reacted to the quintessentially American provincialism of this interpretation with some warmth, “My family would starve before a guest under our roof went hungry!” And that’s the little hitch with this staple of the AmChurch homily handbook.  It renders the sign in John 6 less than meaningless while insulting Near Eastern people to boot. The miracle of the loaves and fishes is that Jesus multiplied five loaves and two fishes into food for five thousand people in an ex nihilo act of pure creation—just like he’s God or something.  Its deeper meaning is that this same Jesus now gives millions his Crucified, Risen, and Glorified Eucharistic Body and Blood to eat and drink so that we might live forever—just like he’s God or something.

There you have it. Sometimes a miracle is a just that: a miracle. The dead rise, the lame walk, the blind see, the hungry are fed. God becomes bread. When we attempt to reduce these incredible events into something credible, we turn the gospel into mush.

Maybe you can feed the hungry with mush, but it’s not healthy and may even make people sick.

Eventually everyone needs something that sticks to their ribs.