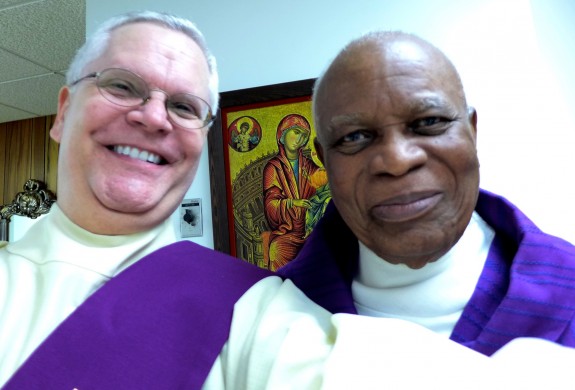 I had the good fortune of meeting Deacon Lionel Roberts when I visited his parish and gave a mission there last winter. I was thrilled to learn he had originally been ordained for the Diocese of Brooklyn—and, even better, he was in the same class as my pastor’s father, Deacon Larry Sanchez.

Lionel Roberts moved to St. Petersburg more than 30 years ago bringing the life experience of a northern transplant and a Caribbean immigrant. Before long, he was immersed in church and community life and organizing everything from a tennis academy for inner city youth to a Tampa Bay West Indian Association. Admirers point to the role he played in founding the James B. Sanderlin Neighborhood Family Center in the city’s Midtown, the reopening of a closed school to serve teenage mothers, and his efforts to increase black membership and participation in the local Roman Catholic Diocese. “I just continue to be amazed by all the things he has done. He has never said someone else needs to do something and never did it for himself, but always did it for justice,” said Bernadette “Bernie” Young, a parishioner at Blessed Trinity Catholic Church, where Roberts is a deacon. As Roberts nears his 90th birthday, Young and others have decided to recognize his contributions. A dinner Saturday at the St. Petersburg Country Club is expected to draw community leaders such as Mayor Rick Kriseman and Bishop Robert Lynch of the Diocese of St. Petersburg. The former Benedictine monk said the plans were a surprise. “As the scriptures would say, you do everything not expecting a reward,” he said. …Roberts, who was born in Trinidad and grew up in Guyana, said his faith and determination are rooted in early experiences. He immigrated to America in 1969, worked as a pharmaceutical sales representative in New York and became active in his Brooklyn parish, where he was ordained a deacon. In 1984, he moved to St. Petersburg. He was just 11 when his mother — a devout Catholic — died in childbirth in Guyana. His father, who didn’t have enough money to return to Trinidad with all of his children, left Lionel and a brother behind and promised to return in six weeks. “He never came back,” Roberts said.

Read more. It’s a great story of resilience and faith.