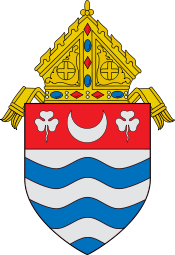 A reader sent this my way today.

This story got a lot of attention a couple weeks back, and now the other shoe has dropped:

Just before graduation last year, campus priest Warren Hall was walking across Seton Hall’s grounds sipping some coffee when a student ran up to him. The student thanked Hall for his tutelage and posed a question he hadn’t heard before.

Hall nearly dropped his coffee cup. She reminded him that he had always taught his students to be honest with themselves and others about who they are. But he had never been asked about his sexual orientation by anyone at Seton Hall. He couldn’t let slip away the opportunity to walk his talk. He nodded his head.

“That student was right,” Hall said. “I have to be myself. I can’t worry what other people think.”

It wasn’t because of his sexual orientation that Hall posted a Facebook message supporting the pro-LGBT NOH8 Campaign last autumn. It was in the middle of a growingly intense national conversation about race that he posted the message, focusing mostly on the idea of opposing race-based hate. A month later his boss asked for a meeting. In the meeting he was ordered to explain the Facebook post.

His future is murky:

…Hall isn’t sure what’s next for him. He has written to the Archbishop asking for a six-month sabbatical. He had no prior indication that a big change might be coming his way, so he would like some time to think about his next big move within the church before being reassigned. Whether he gets that time before another official assignment is entirely up to the Archbishop.

I ended my phone interview with Hall by circling back to his story about the student who asked him if he was gay. While he had professed and reiterated his commitments to the church (priests, after all, make a commitment to celibacy), He wasn’t “out” in a public sense. A select few knew, but telling me was very different from telling a student shortly before she embarked on her life’s journey.

“The best way to live is to live honestly. Honesty with oneself is the most important thing, but you have to be honest with other people.

“I’m not afraid of those questions anymore.”