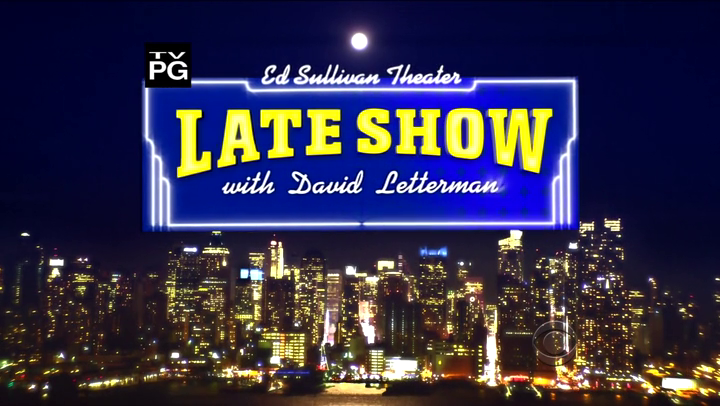 I was working at CBS when the president of the network, Howard Stringer, did something utterly audacious: he bought a legendary New York theater and gave it to David Letterman as his own personal playpen.

That was what happened when CBS invested in what was christened The Ed Sullivan Theater—now a veritable landmark and tourist magnet—on an easily overlooked strip of Broadway in the mid-50s. That Stringer did such a thing in an effort to woo Letterman was pretty ballsy. And it worked.  Letterman came to CBS to launch a new late night show in 1993. CBS’s track record on that time period was just this side of terrible (anyone remember “The Pat Sajak Show”?). A lot of people were curious to see what he would do; some were wondering how long it would take him to fail.

The rest is history, and it’s history that comes to a close tonight.

Watching all the tributes and remembrances has stirred up some memories of my own. Here are a few.

1. The time Mike Wallace sat on my couch and didn’t laugh.  In 1993, I was the writer for a news magazine show called “Street Stories,” hosted by Ed Bradley.  One of the perks of working at CBS back then was being able to watch “The Late Show” as it was being taped, live, on our in-house feed at 4:30 every afternoon. One afternoon, Mike Wallace wandered by my office and saw the Letterman show playing on my small TV, and decided to stop and see what all the fuss was about. The show had only been on a few weeks. He plopped on my couch and watched about two minutes. He barely cracked a smile. A producer stuck his head in, looked at Mike, looked at me, looked at the TV. “Is it any good?,” he said. Wallace shrugged and got up. “The kids seem to like it,” he said. “I don’t get it.” And then he left. (Of course, to Mike Wallace “the kids” comprised a demographic of anyone under the age of 60.)

2. The time Dave offered some advice to Lesley Stahl.  She told me once about the first time she appeared on the show. The studio, of course, was freezing. But she was struck by something else: Dave didn’t say a word to her during the commercial break. In fact, he couldn’t, because the band was so loud. During a commercial, she leaned over to him and shouted, “You know, on ‘Face the Nation,’ I always talk to my guests during the commercials.” He nodded sympathetically. Then he replied: “Maybe you should get a band.”

3. The time I got to work in The Ed Sullivan Theater. From 2000-2004, I helped write the reunion shows for the “Survivor” finales—basically, scripting introductions and teases for Jeff Probst, who really didn’t need anything to be scripted, because he knew the show and the contestants like the proverbial back of his hand. But it was a great way to spend a few days away from the newsroom. One year, we were supposed to do the finale and reunion show from Central Park, but a freak thunderstorm moved in. CBS honchos decided to do the show from The Ed Sullivan Theater instead. Calls were placed and Letterman agreed to it—which was remarkable. He had never let anyone else use the studio before. So for a few hours on a Sunday afternoon, I got to work in that famous theater. My first impression: It’s a lot smaller than it looks on TV.  My second impression: Wow. The Beatles were here. Just…wow.  (The experience also led to Jeff Probst autographing a “Survivor” baseball cap for the young niece of a priest named Frank Caggiano, He is now the Bishop of Bridgeport. When I gave Fr. Caggiano the cap, he was delighted and told me “I am now officially going to be considered cool.”)

4. The time Dan Rather wept. It was the first show after 9/11, and Dave’s guest was Dan Rather. It was a show for the history books. Some thought what transpired was unsettling; others found it deeply moving. But Dan sat next to David Letterman and, reflecting on the events of September 11, 2001, quoted from “America the Beautiful,” recounting how the words “Thine alabaster cities gleam, undimmed by human tears” would forever have a different meaning.  Dan’s voice trembled. He choked.  And he began to weep. Letterman gently gripped his arm. The anchorman apologized, and Dave replied, “Well, by God, you’re a human being” and the audience applauded. (You can see the interview here.) In a sense, I think, Dan articulated what many Americans were feeling at that moment, and did it with a raw honesty that everyone recognized and respected. There had been a lot of tears shed in the days before that, and many more would be shed in the days after.  We were all in shock. It was comforting to know we weren’t alone.

What a time it was.