What are they doing at Church of Our Saviour? The pastor explains — UPDATED

There’s been a lot of attention this week to work that’s been undertaken at New York City’s celebrated Church of Our Saviour parish on Park Avenue—for many years, pastored by Fr. George Rutler. Icons that have decorated the church walls for years were mysteriously removed and some feared a “wreckovation” was about to take place.

My blog neighbor Katrina Fernandez has written about this at some length and has been following the story closely.

Here’s a photo of the sanctuary from a few years back: 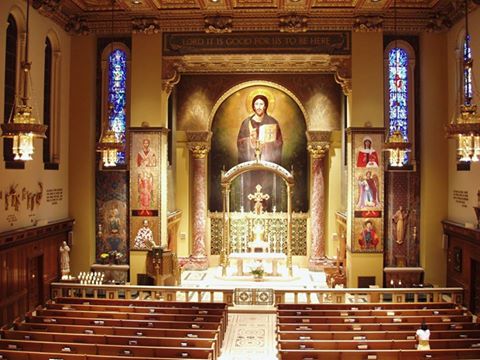 Late today, a post appeared on the parish’s Facebook page, offering the pastor’s explanation.  Note the image below, followed by the posting. 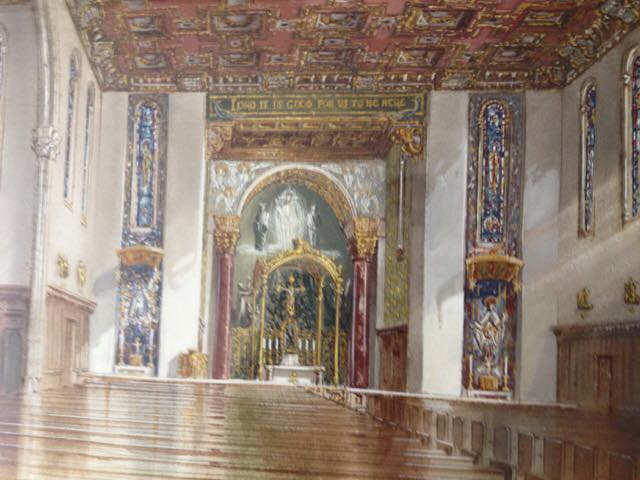 This original watercolor/gouache interior sketch of the proposed interior of the Church of Our Saviour was created by Mr. Richard Zimmerman of the Rambusch company under the artistic direction of Harold Rambusch and architect Paul C. Reilly before the church was built. This was the vision that the pastor and archbishop approved prior to beginning the construction of the building. Note that most of the colors in the sketch, such as the walls, ceiling and side altars are as the church appears today. It is also evident from this sketch that the baldacchino and sanctuary screen were always intended to be part of the sanctuary design even though early 1960’s photos show the sanctuary without them. Since his appointment as pastor on August 1, 2013, Father Robert J. Robbins has worked to restore the church to its original vision and updating necessary systems. The church hired the firm Renovata Studios to begin a professional restoration process that was sensitive to the history of the church, while adapting the church to new technologies for the future. The original church lighting installed by Rambusch in 1959 was completely re-lamped with LED lighting fixtures which provide more light at a fraction of the cost in electricity. The bronze and glass chandeliers were restored and re-lamped with LED bulbs. This new LED lighting system is controlled by a new state-of-the-art computerized dimming system that allows complete control of the light output and can be individually programmed for the various religious services. The 12 icons on either side of the altar were removed to restore the original vision of the central altar and its relationship to the two side altars of Joseph and Mary. The fourteenth station of the cross was found in storage and returned to its original location. The original cast bronze reading desk was of inadequate size for the Book of the Gospels, so a larger identically styled reading desk was cast in bronze and installed on the ambo. The decorative coffered ceiling was cracked and damaged in many places and this was painstakingly restored to original condition. The sound system was also upgraded with new digital technology. The original Rambusch 500 watt downlights were replaced with Rambusch replacement LED units that draw only 85 watts while providing much more light. All original fixture locations and ceiling trim hardware was re-used in the original locations. There is significantly more light in the pews to help the congregation with reading and also much more light on the side walls of the church to make the church brighter. All of this new LED lighting is appropriately colored to 2700k for proper “warmth” of light and is completely controllable and dimmable with a new Strand 15 zone dimming system. The original bronze chandeliers were restored and re-lamped with new LED technology. Previously, the chandeliers had spray painted gold paint over some of the translucent glass in the fixtures and the restoration/cleaning of this glass allows more light in the church. Uplighting was added to the chandeliers so the congregation can better see the beautifully restored coffered, decorative ceiling. New accent lighting was also incorporated into the chandeliers to add needed lighting to the side shrine areas, rear organ pipes and the side altars of Joseph and Mary. New LED architectural uplightng was also incorporated into the window wells of each stained glass window to accent the beautiful architectural columns and mouldings in the nave and choir loft. Every component of this new lighting system is separately controlled by the new dimming system so that different settings can be created for the various liturgies. These 8 different settings are controlled by a central keypad that is simple to use and allows foolproof operation of the lighting in the church. To date, twelve large and twelve smaller icons have been removed from the four columns that flank the altar. According to archival photos, these columns did not originally have decoration of any kind. All icons were carefully and sensitively removed by the same restoration craftsmen that restored the beautiful decorative ceiling of the church. The icon panels have all been wrapped individually in plastic and carefully stored in the undercroft of the church to await re-installation in other parish buildings or perhaps another church. The painted panels were installed on the two columns of the proscenium arch between the main altar and the two side altars. Rev. Robert J. Robbins Pastor Lawrence Hoy Renovata Studios

Maybe this stuff is a matter of taste.

But it seems what is happening now is an effort at restoration, not “wreckovation”—an attempt to fulfill the original vision for the church. There’s something to be said for that. We’ll see what people think when the project is completed.

UPDATE: A few readers have raised questions about how this matter has been handled by the pastor. I’m sure he consulted with the parish council and finance committee and trustees about all this, right?  Right?  And I’m sure he must have communicated this to the people in the pews, right?  And it would only be proper and professional to alert the man who created those icons, right?

UPDATE II: Katrina Fernandez has more on the still-unspooling controversy. Read her latest.