What happened when a layman wore a cassock

Esquire Magazine – not a publication ChurchPOP would normally recommend reading – published a fascinating article on August 24th titled “What Happened When I Dressed Like a Priest: An investigation into the power of the uniform.” The author decided to do an experiment to test the power of various uniforms. He bought four: the uniforms for looking like a Catholic priest, security guard, mechanic, and doctor. He explains why he wanted to do the experiment: I have no uniform. […] I have a really nice blue shirt when I want to wear one. My choice. This is a ho-hum freedom, earned in some societal shift located broadly in one or another populist surge last century. People see it as a kind of liberation. We are individuals, after all. We are not automatons or drones. We are not our work. And so on. But a great many people put on a uniform for work every day. I’ll admit that I’ve often longed to wear a uniform, one that demanded something from me and maybe from the world around me. A good uniform represents. It makes sure you show up. It suggests a simplicity of mission. Once you slip it on, any uniform calls for its own posture. Everyone reacts. They step aside, shoot knowing glances, make room for you; or they turn away, try to forget their foggy prejudices, and ignore you.

What did he learn? The blog author at ChurchPOP lists five standout discoveries from the Esquire article, among them: 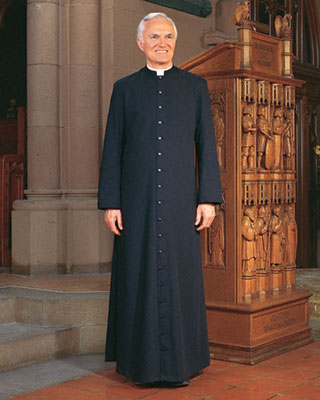 1) People stared at him everywhere he went

“One hour in the uniform and I knew this much: On a bright summer’s day, in a sprawling city, a priest in a cassock is a thing to behold. People draw out their eye contact with a priest. They give nods or bow just a smidge. Or they stare. Openly. Respectfully. Distantly. “When walking in pairs, men wind up their cheeriest selves to blurt out suddenly, “Good morning, Father.” A habit learned in high school, revisited gladly. Twenty-three blocks and the world could not take its eyes off me. A priest, striding north.”

2) People wanted to touch him

“Generally, when you wear a uniform, no one will touch you. Except the priest. People will touch a priest. On the wrist mostly. It happened to me twelve times, just a tap in the middle of a conversation. An assertion of connection, an acknowledgment of some commonality I could not fathom. “Weirdly, the priest’s outfit was the most physically demanding uniform to wear. All day with the hugging, and the kneeling to speak to children, and the leaning in for the selfies.”

That’s just for starters.Read it all.